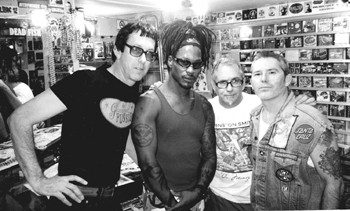 Still Got the Fight: Amidst changing lineups and feuds over profits, the Dead Kennedys still manage to be punk rock.

A watered-down DKs stage a return

I caught the Dead Kennedys’ first North Bay appearance 20 or so years ago at the tiny movie house turned performing arts center in the center of Novato’s quiet business district. It was a fittingly raucous affair at which the band’s rapid-fire, hardcore punk-rock riffs brought down the house–literally.

The band raged. Seat cushions sailed. It was euphoric.

“Yeah, that wasn’t really cool,” DKs founder and guitarist East Bay Ray (real name: Ray Peperrell) recalls when I remind him of the incident during a phone interview.

This week the DKs return to the North Bay with a show at the Phoenix. These days, a new generation of fans is embracing the band, which has regrouped with Dr. Know singer Brandon Cruz replacing political lightning rod Jello Biafra.

“In the past few months, I’ve really started to notice that the audiences are mixed, with teen fans numbering about half of the crowds,” says East Bay Ray. “We sometimes even have parents and their kids at our shows.”

Who would have thought that the Dead Kennedys would become a family affair?

It’s been 25 years since the DKs exploded onto the music scene. During a short and volatile reign, the band pioneered California hardcore and took a radical lyrical stance that almost put Biafra in jail.

It was in 1978 that Ray placed an ad in a San Francisco magazine seeking musicians to join a punk band. He got responses from singer Biafra (aka Eric Boucher), bassist Klaus Flouride (who won’t reveal his real name), and a drummer named Ted (Bruce Slesinger). Within a year, the band had released the independent “California Über Alles,” a scathing attack on then governor Jerry Brown and other “Zen fascists.”

Over the years, the DKs influenced countless bands and railed against the U.S. war machine, Reagan-era repression, corporate corruption, the American work ethic, and the record industry.

One Southern California mother was not amused after her 14-year-old son bought the album. She filed obscenity charges against Biafra, who beat the rap.

The DKs disbanded in 1987. Now East Bay Ray, Klaus Flouride, and drummer J. H. Peligro are at legal loggerheads with Biafra. A highly publicized lawsuit over unpaid royalties has been settled with the courts ruling that Biafra–who operates Alternative Tentacles, the band’s former record label–defrauded his old band mates out of more than $20,000. “It was horrible that we were forced to go to court,” says Ray. “That should not have happened. The label should have just paid it when they owed it. But power corrupts.”

Biafra is appealing the judgment and has filed a couple of lawsuits of his own against his old chums. “It’s my opinion that it’s time for him to acknowledge that he did wrong and to move on with his life,” Ray adds. “Giving more money to his attorneys is not going to make it right. I mean, how punk is that that he keeps dragging us into court?”

(Biafra’s website paints a different picture of who’s dragging whom. A posting dated Oct. 15, 2002, states that “East Bay Ray and Co. have filed a new lawsuit against Jello Biafra claiming he is interfering with their ability to profiteer off of Dead Kennedys.”)

Last year, and against Biafra’s wishes, the revamped DKs released Mutiny on the Bay (Manifesto), a set of previously unreleased live shows from 1982-1986. More recently, the band’s albums have been remastered and reissued. A new vinyl version of Frankenchrist is due out next week, but don’t look for the infamous Giger poster.

“I don’t really want to get into telling people what to think,” Ray explains. “The whole thing about the Dead Kennedys is telling people to think for themselves, to get the facts and then make their own decision.”