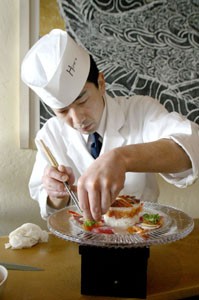 Holding Out for a Hiro: Gen Mizoguchi prepares chirashi zushi.

A new Japanese restaurant in Petaluma ups the ante

There are good reasons behind having more than one newspaper in town. Different coverage, different viewpoints–it all adds up, in theory, to benefit the readers.

In the case of Hiro’s, the new Japanese restaurant in Petaluma which Jeff Cox wrote about a few weeks ago in the Press Democrat, the benefit is all mine for having tried it, and I pass the joy onto you, the reader. Cox, who was “astounded” by Hiro’s, focused on the restaurant’s cooked food and rolls, rather than nigiri–the simple combination of fish and rice that can make or break a sushi restaurant. The omission became the perfect opportunity for me to pounce upon the unsuspecting eatery.

On a Thursday night, Hiro’s was packed, thanks in part, the waitress said, to the recent review. The space is dramatic, with a bar up front and a long, deep sushi bar stretching into the front half of the restaurant. Most sushi bars have a raised, glassed-in refrigerated section, but the sleek version at Hiro’s was sunk into the bar, making it easier to watch the three sushi chefs (including a woman, which is rare) slice and dice to keep up with their orders. The place was loud and lively, with undefinable, upbeat music bumping somewhere in the background.

Owner Hiro Yamamoto and managing partners Zach Woods and Mathieu Royer have spared no effort in making their restaurant visually stunning. Even the bathroom (I can only speak for the ladies room), with a beautiful, artfully designed sink, adds to the experience. The artwork, right down to the carved wooden table in the restroom, is by Naoki Takenouchi. The huge Japanese block print above the sushi bar is arresting, though the caged black and white crumpled paper above the tables left this diner a little perplexed.

Let your brain chew on the art while your mouth chews on something else. We started with cocktails, for Hiro’s offers a huge sake and sake cocktail list. I ordered the house-made lemon infused sake, and Zach Woods–very personable and taking a clear interest in his menu–came over to tell me that he had taken the lemon sake off the shelves because it wasn’t tasting right (it’s since been taken off the menu).

Instead, I tried the cucumber sake ($6)–cool and crisp with a lingering sake sweetness. Like vodka, sake takes well to infusions; it’s the perfect platform for fresh flavors. My companion had an umai mango ice ($6.50), sake and mango blended and bursting with the taste of the fruit.

With the drinks, we ordered a couple
of appetizers to munch while we focused on the sushi menu. The calamari tempura ($7.50) was a generous serving, hot out of the fryer. The batter, slightly on the salty side, coated the little tendrils just right, and the seafood was fresh and tender.

Sunomono ($6) is the ubiquitous cucumber salad that is so often doused with a cloyingly sweet dressing. Hiro’s version went much lighter on the dressing, and the thinly sliced cucumbers avoided the dreadful, syrupy end that so often befalls them. The salad, served in a martini glass, was topped with shredded crab meat, which provided a good textural counterpoint to the crisp vegetables.

As our sushi order started to weigh down our table, we ordered another round of drinks. The frozen white peach bellini ($7)–sake, white peaches, and champagne–was another fruit bomb, with the champagne getting lost in the blending. I tried a sake off the extensive list, which is quite helpful in listing a dryness index to indicate how sweet or dry a sake would be, as well as the prefecture the sake comes from.

I chose the Katana ($7.50) for its moderate price and its dryness (I’m a fan of sweeter sakes and wanted to taste the difference). The clean, sharp sake was poured into a glass that sat within a cedar box–the overflow into the box signifies the generosity of the hosts (and also imparts a wonderful cedar aroma to the drink). Hiro’s also has an interesting selection of sho-chu cocktails (sho-chu is a Japanese distilled spirit, usually made from potatoes, rye, or corn) and, of course, wine.

Throughout the meal, the service was good if hectic. Hiro’s seems to have a lot of people on staff, and every once in a while they tag teamed us to get a drink order or check in. The staff were all very friendly, though, and seemed to enjoy their work.

And then the hedonism truly began. Our table soon filled to capacity with beautiful dishes. The sushi, fresh and sparklingly clean, was perfectly cut–not an out-of-place tendon to be found, teeth slicing through it with abandon. It’s not hard to find fresh sushi in the North Bay, though it tends to be much more expensive than in San Francisco, Hiro’s being no exception. The talent of the chefs at Hiro’s comes through, however, in how they slice and put it together: not too much rice, the right amount of wasabi.

The saba (mackerel, $3.50), always one of the cheapest options on a sushi menu (and one of the most flavorful, as long as it isn’t overly fishy) was delightful, the oily freshness shining through in its silvery color. Maguro zuke (marinated tuna, $5) is something I had never seen on a menu before. It was deep burgundy in color, a much deeper red than regular maguro, and very tender, but it tasted like maguro.

The katsuo (bonito tuna, $4) is usually served lightly seared, which can dry it out, but Hiro’s chefs managed to keep it perfectly moist. The tiny red bubbles of tobiko (flying fish roe, $4) encased in their nori wrapper burst in the mouth with a salty pop, and the unagi (freshwater eel, $4.50), warmed and dabbed with tare sauce, tasted smooth and rich.

Hiro’s has its fair share of expensive, mayonnaised options. The red roof roll ($12) is shrimp tempura and cucumber wrapped in rice and nori, with a slice of salmon and a dollop of spicy mayo (the red roof in question). It’s a bit much; the individual flavors don’t come through clearly. The caterpillar roll ($11) was whimsically arranged into a sinuous caterpillar shape with sprouts for antennae, and filled with eel and cucumber and wrapped in nori and avocado.

The hamachi frito roll ($12.50) was a study in excess–yellowtail, eel, green onion, and avocado wrapped in rice and nori and dipped in tempura batter, then fried–but perhaps not surprisingly (excess is rewarded), was the best of the bunch. The hamachi was served well by its warming dip in the fryer, and the roll came out not too oily and wonderfully rich, with flavors shining through.

Needless to say, we had sushi to take home, but it’s wise not to overorder. Sushi, of course, doesn’t last long, and it doesn’t taste as good when it has sat in the fridge. We couldn’t even look at a dessert menu. But hey, Jeff Cox had written about the desserts already–thanks, Jeff!