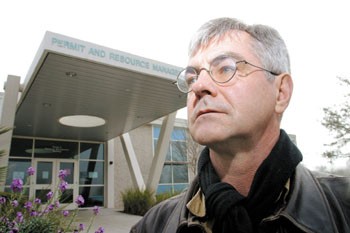 It took me a couple of days to gather courage and go and see the destruction,” says Zeno Swijtink, coordinator of the Atascadero Creek-Green Valley Creek Watershed Council, of the damage done to Atascadero Creek in Sebastopol by bulldozing. “When I stood there at its edge and looked out over the piles of uprooted trees–a veritable war zone–I felt lonely in my grief.”

This is an auspicious time to speak up for greater environmental protections in Sonoma County. The general plan is under revision, the Citizens Advisory Committee is accepting public input, and recent damage to the creek makes the need for change in county and state agencies obvious.

The man responsible for the damage is Sebastopol property owner John Tomich, who had the land bulldozed over Thanksgiving weekend. Outraged neighbors and passersby promptly reported the destruction to county, state, and federal regulators.

What concerns the Department of Fish and Game, says Bill Cox, district fisheries biologist, is “the loss of woodland habitat for wildlife, especially bird habitat, and the potential for increased erosion.”

Tomich is also in trouble with the North Coast Regional Water Quality Control Board and the U.S. Army Corps of Engineers. But the Sonoma County Permit and Resource Management Department has no argument with him.

Tomich claims he called the PRMD several times in advance and was told that no permits were required. On Jan. 8, Nancy Lingafeldt, code enforcement supervisor at the PRMD, said, “Our county code enforcement inspector for the area has gone out, taken a look at [the damage at Atascadero Creek], and has discussed it with my manager, Ben Newman. It’s my understanding that the area wasn’t in a riparian corridor, and that it is not a biotic resource area. [Therefore], the person who is removing the trees and shrubs along there does have the right to do so to clear his property.”

But according to both Bill Cox and John Short, senior water resource control engineer at the North Coast Regional Water Quality Control Board, the area is in a riparian corridor.

Commenting on discrepancies between the PRMD and other agencies, Lingafeldt said, “If regulations between state and county conflict, the appropriate agency does the enforcement of it. Our county can’t enforce state regulations. Unfortunately, sometimes county and state regulations don’t completely agree.”

What qualifies as a riparian corridor is one of the discrepancies between county and state regulations. Another is that with few exceptions, county regulations don’t protect wetlands, but state and federal regulations do.

If you want to build something, you have to go to the county. But it’s the task of the U.S. Army Corps of Engineers to determine if a wetlands is involved. If a creek bed, bank, or channel is involved, the state Department of Fish and Game has jurisdiction. If the project affects water quality, then the Regional Water Quality Control Board has jurisdiction.

Speaking on condition of anonymity, a county official shed a little light on this arrangement. “You’re not nuts. It’s just that it’s all crazy. The county is going to have a different layer of jurisdiction from Fish and Game or Army Corps or Water Resources. There are agencies that you would think would have the same definitions and the same arms of jurisdiction that don’t, and that don’t have the same definitions for terms as each other.”

More interagency communication might help. In fact, until last year’s budget cuts, state representatives were housed at the PRMD. Says Swijtink, “I sometimes think that the situation would be so much better if there were group-level enforcement, if county and state worked together. Even without new environmental protections, that would be a major advance. So much falls through the cracks here. It’s really embarrassing.”