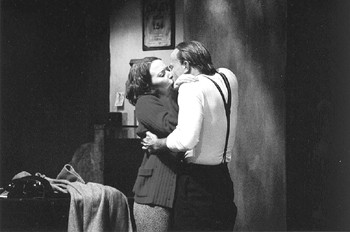 Testing Ground: Emily Ackerman and Scott Coopwood as Glory and Terry Meighan in one of Tennessee Williams’ earliest works.

Misfits fight back in ‘Fugitive Kind’

It’s a theatrical experience that offers the thrill of opening a time capsule. More than half a century has passed since Fugitive Kind, a two-act drama by a then unknown playwright named Thomas Lanier Williams, last took to the stage. Virtually no one saw the play then, since it received only two amateur performances. But now, this long-lost work by the late, great Tennessee Williams is back in an ambitious production directed by Lee Sankowich at the Marin Theatre Company.

Of course, the revival of an unknown work by one of America’s greatest playwrights could be a good thing, or it could be profoundly disappointing. Literary critics will argue until the ivory tower falls about whether any work can be truly timeless in the grandest sense. But no one can dispute that some literature is painfully dated from the moment a writer puts down his pen.

There’s no question, at any rate, that Fugitive Kind is heavily stamped by the circumstances in which it was written. Williams was 26 at the time and struggling to get through night school during the Great Depression. At its best, Fugitive Kind conveys all the desperation of that grim period.

The play, set in a flophouse on the St. Louis waterfront, sports a large cast of alcoholics, prostitutes, drifters, and other examples of the “fugitive kind.” But a pair of lovers lies at the heart of the narrative. “I’m a misfit, an outcast,” cries Terry Meighan (played by Scott Coopwood), as he tries to explain his chaotic life to his new love, Glory (Emily Ackerman), the young woman who runs the hotel reception desk.

Terry is a typical Tennessee Williams bad boy–tough, ruthless, and cocky, but also sexy and inclined to make reflective remarks about snow. Childhood poverty drove him to crime. Now he has the sensitive soul of a poet and the sensitive fingers of a safecracker. Unfortunately, his recent bank jobs didn’t go well, and he’s got half the cops in America looking for him.

Glory is another Williams stalwart–the tough-talking dame whose hard exterior hides a wounded soul. As she copes with Terry’s romantic advances, she’s also trying to keep control over the menagerie of misfits that comprises her clientele and keep her rebellious brother Leo (Richard Gallagher) from being kicked out of college for publishing leftist propaganda in the school paper.

There are subplots galore in this complicated play, and there are also probably a few too many characters. What keeps the slightly unwieldy work moving is this production’s generous supply of acting talent. Coopwood and Ackerman are excellent as the romantic leads; they both manage to put interesting spins on their (by now) clichéd characters. Among the minor roles, Michael Ray Wisely stands out as Chuck, the flophouse’s alcoholic handyman. There’s no role easier to overplay than a drunk, but Wisely lends his character a painful dignity.

Frankly, it’s not hard to see why Fugitive Kind didn’t win the acclaim scored by the playwright’s later work, lacking as it does the psychological complexities of Cat on a Hot Tin Roof or A Streetcar Named Desire.

Still, there’s much to enjoy here, from the melodrama of Glory and Terry’s dangerous love to some finely drawn minor characters. Perhaps it’s best to enjoy Fugitive Kind for what it is: a minor work that signaled the budding development of one of the most remarkable talents in American theater.

Fugitive Kind continues through Feb. 9 at the Marin Theatre Company in Mill Valley. For details, call 415.388.5200.