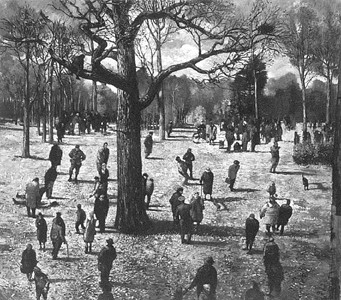 An Embarrassment of Riches: As long as there are things in the world to see, says Chester Arnold, he will never run out of themes to paint. Shown: ‘Incidents at Half Past Five.’

The great fiscal trap of any reasonably successful visual artist is in feeling forced to paint the same thing over again because it sells. The elusive Pablo Picasso, who dabbled with brilliance in every available medium, is perhaps the most successful escape artist. Others have to make a dogged daily decision to go elsewhere, to trail whatever bubble best pops for them in the here and now.

Sonoma painter Chester Arnold knows all about this. He could have been “the hammer guy,” according to his own description, a painter who led a lucrative life placing charmingly surreal hammers inside his canvases as a testament to the seduction of destruction, and grown quite fat upon them.

But a brief scan of the paintings assembled for Arnold’s one-man mini retrospective, “Destinies Manifest,” showing through March 9 at the Sonoma Valley Museum of Art, might prove Arnold instead to be the “brain guy” or the “chain guy” or the “water-and-islands guy” or the “self-portrait-as-a-parade-float guy.” He’s pleased to make it hard to pin him down. Painting recognizable images in often unusual settings, Arnold’s not even a representational painter by his own description. His tools are fiction and illusion.

“I find myself explaining and defending the artist’s dilemma by contrasting it to the lives of novelists or writers,” he says, settling his tall frame into a chair in the comfortable studio behind the home he shares with his wife Frances and their two teenaged daughters. “People seem to understand their work better, and a writer has so much more freedom in exploring. People don’t question when a novelist goes in a strange direction and writes a strange story–they don’t even flinch–but when a painter or sculptor does something strange, it makes me realize that the art world is much more conservative in some ways, even though it’s got the reputation of being so free.”

Arnold–who teaches art at College of Marin–prefers to refer his style to what his late colleague, the painter James Doolin, called “illusionistic” painting. Arnold explains that Doolin termed it that “because he felt that what he was painting wasn’t really realism; it was an engineering feat of illusions, like a fiction as opposed to a nonfiction.

“For somebody who is painting representationally in that kind of tradition, it really behooves, at least to me, to find elements to work with that are challenging and dynamic and have a lot of life, because the last thing I want to do is a still life. I don’t want to put down still life painting, but for me there’s too much turbulence in my spirit to want to work with something that’s static.”

Admitting with a deprecating laugh that he was “a sensitive boy,” Arnold, 50, spent most of his childhood in Germany. His father worked dramatically in espionage, and Arnold played in bomb holes, collected antiques, and illustrated the school paper.

When Arnold was 16, he attended an exhibit of German expressionist painter Max Beckmann’s works and decided on the spot to become an artist. His family repatriated to the States when he was a high school senior, and he supported his burgeoning career by delivering the morning newspaper. For 20 years.

“I tried to make a painting every day,” Arnold says, “because I realized that I had a lot to learn and I developed this theory that the more paintings I made, the sooner I was going to become a master at what I do. I must have digested every epoch of the history of art over time. Every day it was different: one day I was painting like Paul Klee, the next day I was painting like the Renaissance–exploring, trying to figure out what all of this means, because I wanted to find my own language.”

And indeed, the nonverbal communication of paint’s message is perhaps Arnold’s most unifying theme. A chalkboard on his studio wall reminds him to “Follow the metaphor,” something that he tries to teach his students through an in-depth immersion in the old-fashioned techniques of canvas and paint preparation.

“There are certain things that I think are very important to learn in the language of painting, and they’re fairly simple,” he says. “I always try to stress that this is language, this isn’t story; this is just the language that tells the story. You tell it anyway that you want, and there’s a tremendous amount of flexibility in the language to stretch, and you can go pretty far in all directions from the basic premise and still end up with a painting that’s going to be interesting and beautiful to look at, or at least richer, than if you didn’t know about these techniques. It’s like having a greater vocabulary when attempting to speak.”

But even he sometimes becomes frustrated when attempting to speak through paint, occasionally jotting a short poem down on the back of his works. Some of these poems will be printed out and displayed on the wall in “Destinies Manifest.”

“They aren’t really made to exist as literature but as an adjunct to the image,” he explains. “It’s not like it’s an illustration with a poem; they’re just two things that were churned up at the same time.”

Arnold’s emotions and political ideals inform his subject matter, be it burning tires or trash mountains or water-held islands. “I like to tackle things that are difficult and challenging, and water is one of the most absurd things to try to paint because paint is so unlike water,” he says. “To try to make it feel like water you wrestle it, you do all of these things formally with it. I really like that struggle, trying to come to terms with it. You can look at photographs of water and paint from a photograph of water, but what you end up with,” he laughs, “is a painting of a photograph of water.

“You go out and paint water on location, and I think that’s the best way to get familiar with it. . . . You can look at it endlessly and see what it does, and try to remember and redeem that spirit.”

The content of the SVMA show is drawn in large part from a 2001 exhibit at the San Jose Museum of Art. Arnold explains the title: “I had this painting of an open-pit mine and on the back I had a little poem, and one of the lines is, ‘In the great West, where destinies manifest.’ I thought that ‘destinies manifest’ really was what my work was about at the time, because there were a lot of paintings about the American West after the 20th century, after the Fall. I was figuring that Manifest Destiny led us here, and now our destinies manifest in what we’re leaving behind us, the devastation we’ve created.”

Given the often disturbing themes and large size of his canvases, Arnold is sometimes surprised to learn that they’ve sold and is even more gratified to enter that phase of his career resulting in large public exhibitions.

“To have shows in museums, where you’re having a visual conversation with a much larger audience than you’ve had before . . . ,” he wonders aloud. “Maybe I’m an evangelist at heart, but I love to feel that my painting communicates to my fellow man. It’s very rewarding to find that. It really gives meaning to my life.”

A large work in progress tentatively titled Discourse, a canvas covered with mouths in various states of agitation, sits before Arnold in the studio. Is this the next thematic obsession? “Who knows,” he shrugs. “All I know is that it’s a very compelling subject for me to work with right now. I may do two; I may do 10.”

Later he says, “I used to worry a lot more than I do now. I’ve surrendered to the fact that I’m a storyteller, and I love so many different things that they have to be in the work. As long as the world is full of things to look at, there will be plenty of things to paint.”