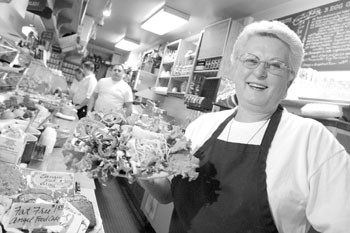 Ya Gotta Have Lunch: Marta Salvador of Arrigoni’s puts together a deli sampler.

Breakfast–now there’s a meal. Drawn-out breakfasts with multiple cups of coffee and a newspaper and a crossword. Breakfast is especially nice to have when the sun is up in the sky a good piece, i.e., not very early. The ideal breakfast is more like a brunch, thereby negating the need for a lunch and creating more room for dinner, the other wonderful meal, which is especially nice to have while it is dark outside, either in the company of NPR or a kindly dining companion–and maybe a glass of white wine or two, or a beer.

There. Isn’t that a lovely way to live? But lunch . . . eh? Lunch is for people who have to, you know, work–people who have to get up before 9am and be in an office or at school, both of which are downright terrible places to be. In fact, the Bohemian office is the eventuality that reacquainted yours truly with this midday institution.

Our downtown digs are boutique-sized, meaning space constraints force us to keep the coffee pot, now dusty, in some weird, inaccessible cupboard in the middle of the hallway. For a while I tried bringing peanut butter and jelly sandwiches from home, but they failed to excite. After 12 years of public school education and brown-bagging it, quite frankly I have no desire to relive those days.

And so a good bad habit of going out to lunch ensued. It’s helpful to at least get out, move around, remind oneself of the things that happen in the real world, as opposed to the office world. Besides, eating at your desk is like pooping in your pants–it’s just not the time and place.

This led to an odyssey of downtown Santa Rosa lunch options–delis, where none of the food is too challenging or distracting. Lunch at a good deli offers (a) a serviceable meal in the $5-$7 range; (b) food that’s not all heavy and greasy; and (c) service that’s prompt but not rushed, providing a lunch that can be lingered over.

Arrigoni’s Deli and Cafe, Mac’s Kosher Style Delicatessen, Fourth Street Market Deli, and Ralph’s Santa Rosa Subs are practically within spitting distance of each other. And you can get food to go at all of them, so you can either soil your desk or sit in Courthouse Square and watch the gutterpunk kids and the homeless dudes.

Arrigoni’s, which has been around forever, has so much stuff–salads, soups, pastas, savory torte things, bottles of wine and beer and fancy sodas–that it’s almost overwhelming, especially since you order at the counter, making it a good idea to go in there with an attack plan. Salads in bowls and on platters rest on ice in a big glass case, looking like something out of an old-school Sunset cookbook. But because I can ultimately eat the same three things over and over again forever, I always get half of a sandwich and a cup of soup.

Arrigoni’s crams their sandwiches with layers and layers of meat, and so half of a sandwich turns out to be a very reasonable portion. The bread is the soft, square, grocery-store kind (alas, Arrigoni’s does not toast bread for sandwiches, their major drawback!), and their mustard is sunny and yellow, spread on liberally. I gravitate to pastrami (perfect) or roast beef (flavorful and not dry at all) on rye, no mayo, everythingelseyesplease.

The soup at Arrigoni’s is utterly satisfying, a real workhorse. Their minestrone is not exactly the apex of seasonal freshness, but it’s chock-full of vegetables and canned tomatoes and overcooked pasta–the classic deli minestrone. Minestrone and black bean chili are always available. As for the soup of the day, it’s often chicken noodle or cream of fill-in-the-blank. Everything is made in-house, and none of it is pretentious at all, just good stuff.

The Naber brothers, who are from Jordan, bought Arrigoni’s Market in 1976 and changed it to its present restaurant/cafe form. One of the brothers (Jake or Raj, I’m not sure which) is always doing this cash register schtick where, if an order totals $5.15, he’ll say “Five hundred and fifteen dollars.” This guy is awesome! The other day I was in there, and he said, “Good aftermorning!”

Hidden in the walkway under the clock tower in Old Courthouse Square, Ralph’s Santa Rosa Subs is a small nook of sandwich bliss. Ralph himself is oftentimes manning the cash register, and he is palpably a New Yorker, always willing to share his own opinion on tasty sandwich combinations. To the right of the counter is a menu, color-coded, up on a bulletin board, with a breakdown of the 30 sandwiches offered (“Please Order Sandwiches by the Number”).

You can also create your own sandwiches, but it pays to trust Ralph’s judgment. The New Square Deal (aka the Super Sub, aka #1) packs a big, fat stack of turkey, salami, ham, Swiss cheese, hot peppers, lettuce, and tomato onto a sourdough roll–and, man, this is one heavy-duty sandwich. I’ve found it works best to tackle Ralph’s sandwiches in two parts, with a break of maybe an hour in between. The roll is nice and chewy, giving the old jaw a workout that likewise necessitates the two-part approach.

Ralph’s other sandwiches come in a spectrum of creative variations–barbecue sauce, “oriental sauce” (whatever that is), pesto, and cranberry sauce often factor in somewhere–with a number of vegetarian sandwiches that, minus the cream cheese or mayonnaise, could probably be vegan. The Luther Burbank, with avocado, marinated mushrooms, cucumber, tomato, alfalfa sprouts, vinaigrette, and mayonnaise, is like a salad sandwich and is a perfect antidote to a lunchmeat overdose, an ever present threat when dealing with delis.

Exiting the walkway leading into Old Courthouse Square, a sign hanging over the portal reads, “You’ve Just Passed the Best Sandwiches in Town!” This is quite possibly accurate, but a mere sandwich does not always a lunch make. Sometimes, lengthy, laminated menus and coffee refills from a kindly waitress are in order.

So after passing the best sandwiches in town, if you tromp across Old Courthouse Square and keep plugging along down Fourth Street, you’ll find Mac’s Kosher Style Delicatessen, another Santa Rosa institution. It’s long and narrow, lined with booths and a lunch counter, and, come lunchtime, it’s buzzing with clientele, many of whom are regulars–Mac’s is a terrific people-watching spot. The decor is minimal. There may be photographs by local artists framed and up on the walls, but that’s it. No froufrou here!

I’m coming to realize that a kosher-style deli means that the pickles are good, and that you can get weird meats on your sandwich, and that the mustard available will be above par. Mac’s sandwiches are made with soft, sliced bread (their rye is kind of like white bread but with flecks of caraway seeds) and, like Arrigoni’s and Ralph’s, piled high.

Those on the daring side can order tongue (cured and thinly sliced, it’s very tasty for those who can get over the teeny bumps), while those on the conservative side can order a lettuce and tomato sandwich with “special dressing.” Fries, burgers, tuna melts–they’ve got all that stuff. The big stroke of luck at Mac’s turns out to be their eminently edible coleslaw, which is shredded (meaning thinly sliced and not minced) and coated in a lightly sweet dressing that’s on the gloppy, mayonnaisey side.

Taken thusly, lunch turns out to be not so bad. I still prefer breakfast and dinner, but, as they say, any time spent eating is time not wasted. The hot dog cart on the corner of Fourth and Mendocino–also owned by Ralph’s–is worthy of noontime visits too. These places are responsible for bringing us forth from the darkness of our offices, and we should be thankful.