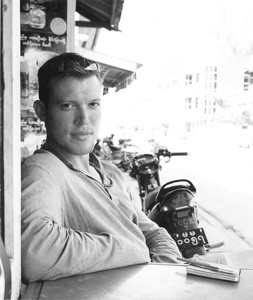 The New Bohemians: Rolf Potts has perfected the art of vagabonding, and the art is good.

When Rolf Potts was 23 years old, he’d had enough rainy weather. He had $5,000 saved, a few good friends, and the van was running OK. So on New Year’s Day 1994, he and some pals took off from their Northwest college home in search of sun.

Thirty-eight states and eight months later, Potts realized that he’d found a new calling. He was no longer a loafing postgrad; he was a vagabonder, as he calls it, and a travel writer, and his home would never be in just one place again.

Inspired by the Myth That Jack (Kerouac) Built, Potts wrote a book about his experiences touring America in search of warmth and experience. “It was a total failure,” he says by phone from a Los Angeles restaurant, “though it taught me everything that I needed to know about being a travel writer.”

When he was 26, Potts moved to Korea to teach English. He lived simply, saved his money, grew up a bit, and took off again. This time he had a nest egg of some $20,000 and a short-lived gig writing a biweekly column for Salon.com.

Now 32, he’s been living on the money ever since, hitchhiking through Lithuania, being trapped for three days in West Beirut by his own sense of politeness, and staying for indolent stretches in Cairo and Thailand–staying, indeed, wherever the culture, new friendships, or even love kept him.

During the six days that it took to set up an interview with Potts, he was alternately in Thailand, Kansas, and Los Angeles, cheerfully reporting in via e-mail as he went, offering a new cell phone number every other day. The author of Vagabonding: An Uncommon Guide to the Art of Long-Term World Travel (Villard Books; $11.95), Potts–who appears at Corte Madera’s Book Passage Jan. 29–sees travel as a much deeper journey than a trip to the top of the Eiffel Tower. It’s a journey of the soul, of the self, and of the psyche–or rather, it should be.

A vagabonder differs from other travelers in that he or she has allowed two pure luxuries to dictate a trip, that of time and sight. There should be a good long spate of months available, and you need to be willing to whole-heartedly experience what you’re about to experience.

Anyone, Potts says, can give themselves these gifts, but there is a catch. You have to simplify your life first. Pay off credit card debts, go without even the small extravagances, save your cash, quit your job, rent your house to match the mortgage, sublet your apartment, choose an area and then . . . just go. Buy a one-way ticket, find a cheap, safe place to stay, and walk out into the streets. What happens next is up to kismet and your own canny self.

“It’s about how to prepare your attitude,” Potts says of Vagabonding. “It’s about travel for the development of your soul. I tried to explain that in nonspiritual language, because that language has its own dogmas of thought and it’s the real world that we live in. Unless you can embrace an attitude of open-mindedness and adaptability and patience, you’ll always be comparing your experience to your expectations, which means that you’re limiting your parameters.”

As much a philosophical treatise as a how-to guide, Vagabonding offers basic pointers on preparing for the road ahead and is an excellent reference to numerous other books and periodicals on long-term travel. But a book is of necessity a static thing and the world continues to change–recent newspapers showed a beautifully printed sign in an upscale South Korean restaurant warning, “Americans are not welcome here.” How is it out there?

“People are smarter than we give them credit for, and they don’t tend see you as a political apparition,” Potts assures. “They may despise your government, but I haven’t known this to be a threat. It was however,” he chuckles, “really easy to travel during the Clinton administration; it was socially easier to be an American–you didn’t have to listen to a 15-minute lecture [from other travelers].

“I feel guilty because I’ve traveled with Israelis and ended up lecturing them on the Palestinian issue, and now I know how they feel. But that’s just part of the social dynamic of travel. You can always pass yourself off as Canadian, but it’s better to try to be a Beautiful American.”

Potts doesn’t cast himself as an expert and warns against those who do. In fact, he admits that he makes a travel mistake nearly every single day.

When asked what his latest mistake is, he thinks for a minute and says, “There’s an instinct to see the world through the computer screen. I was in a friend’s office catching up on e-mail, and I realized that I was in Santa Monica and needed to get outside and see the beach. I guess it’s often a matter of being creative and striking a balance.”

Potts, who says that he’s “a little shy stateside,” also admits that he hasn’t yet mastered the fine art of the road romance, a unique thrill he alludes to and tries to offer advice on in Vagabonding. “For whatever reason, some people travel and it’s an expression of their home style: if they shop a lot at home, they’ll shop a lot when they travel. If they date a lot at home, they’ll hook up even more on the road. You can follow your feelings if that’s not something you’re used to doing. I haven’t quite figured out how to make it work. Separating,” he sighs, “can be very sad.”

Not wanting to make the author sad, I ask Potts about the least favorite place he’s been. “Vietnam,” he says instantly. “I hate to make generalizations about a culture, but in the social atmosphere when I was there, people saw me as a walking dollar sign. It took me to the breaking point. A sweet little 12-year-old girl will try to sell you a postcard. You say, ‘No thanks,’ and she’ll call you a motherfucker. It exhausted me emotionally.”

“Mongolia,” Potts says, hastening to remind that he grew up in Kansas and that the steppes of Mongolia can be seen (if one squints) as the Kansas of Asia. “It’s like being a dream version of my life, but with bigger skies. I can be happy with the very small moment, and it’s a place where you can feel your smallness. It takes me back to a premodern version of myself. It’s a cliché, but as a guy who grew up on the prairie, it’s magical to me.”

For someone who travels so much, Potts is strikingly disciplined, maintaining a daily blog and community site (vagabonding.net) and constantly updating his www.rolfpotts.com website. How does he keep such structure in the chaos of constant movement?

“I have sort of become a mad scientist of what I do. I spend less time sitting around with people drinking beer at night. I sequester myself and work alone for days at a time. There are social and experiential sacrifices, but it’s a privilege,” Potts says firmly, “to make a living as a writer.”