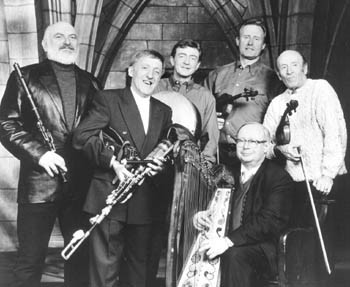 Chieftains take to the road

THE LATEST CD by the Chieftains, Water from the Well (RCA Victor), is being hailed as a return to the venerable group’s Irish musical roots. But Paddy Moloney, the bandleader who has guided the Chieftains through a 37-year history that has seen the group earn their place as the world’s premier practitioners of Irish music, is quick to say he doesn’t necessarily agree with that marketing spin.

It is true, he noted, that Water from the Well is a departure from such recent CDs as The Long Black Veil (the best-selling CD of the group’s long career) and Tears Of Stone. Those CDs featured guest vocals from a host of rock and country stars, including Mick Jagger, Sting, Mary Chapin Carpenter, Bonnie Raitt, and Joni Mitchell. There is no comparable star power on Water from the Well.

But people who perceived past albums as a move away from the Chieftains’ traditional Irish roots were mistaken, Moloney insists. “We never really departed from Irish music. I mean, come on now, The Long Black Veil had the Rolling Stones, but the song we did with them, ‘The Rocky Road to Dublin,‘ is 300 years old,” Moloney says. “And on Tears of Stone, four of the songs are in the Irish language. How much more traditional could one get? It is more or less going out there and asking our friends and great singers from around the world to give us their interpretations of the music and song. That was more or less how it happened.

“So we didn’t really go away from that,” he adds. “In fact, all of our concerts, 80 percent of the music we play, is always traditional Irish music, and maybe the other 20 percent is adding guest artists and a touch of other Breton music or Celtic music, that kind of stuff.”

That distinction noted, Water from the Well, which will be released in February, can certainly claim the title of being one the most homegrown records the Chieftains have made. For the CD, Moloney and the other group members–Martin Fay (fiddle), Sean Keane (fiddle), Derek Bell (harp), Kevin Conneff (bodhran, vocals), and Matt Molloy (flute)–recorded basic tracks in the studio, and then journeyed to 10 Irish counties, where about half of the CD’s 17 songs were supplemented with live performances by the Chieftains with a host of Irish music guests, including the popular Celtic group Altan, banjo player Barney McKenna, and fiddle-layer Ashley MacIsaac.

“It was always our intention . . . to do a musical tour of Ireland,” says Moloney, during a phone interview. “It only took 10 days [to record]. We got going, visited all the little well-known pockets and stuff where traditional music is very popular, and we knew some of our musical cousins, you might say, the Charlie Parkers and Miles Davises of trad music and song. And we filmed the whole thing (for the A&E cable channel).”

“A&E did a great job on it. It’s being shown around the world at the moment. The album was great. I might say half of [the project] perhaps was done in the studio and half on location. In some cases, I faded tracks, that went from studio to live. It was terrific to do. Ten days, as I was [saying], and then put them under the arm, and I went off and mixed it, so the entire package was [done] in a month.”

According to Moloney, merging the studio and live tracks did not present that much of a technical challenge.

“We spent an afternoon in each venue,” he explains. “We had already played, we would have recorded the music in the studio, and I would bring along that tape and listen to it in the location. And we’d just go straight from there straight into it. It was easy for me then to blend across from one to the other and still have the same vibe, the same feel. I love live recordings. You get something out of a live recording, you get the mistakes, but then you get other great little things that happen that don’t normally happen in the studio.”

INDEED, the finished tracks on Water from the Well sound completely seamless and display the variety and vibrance of Irish music, as all six Chieftains showcase an ability to interweave their instruments that seems to have grown almost telepathic after the 25 years in which the current lineup has remained intact.

The music ranges from the winsome tones of “Bean An Fhir Rua (The Red Haired Man’s Wife)” to the spirited multi-faceted romp “The Lovely Sweet Banks of the Moy” to the cinematic changes in mood and spirit of “Lots of Drops of Brandy.”

Moloney put together the first edition of the Chieftains in 1963–ironically the same year that the Rolling Stones debuted. But it wasn’t until the mid 1970s that the group truly began to gain widespread recognition outside of their homeland. In 1975, the Chieftains played a triumphant show at the Royal Albert Hall in London to 6,000 people and capped the year by being voted group of the year by Melody Maker, England’s leading music magazine. A year later, the group recorded music for Stanley Kubrick’s epic 1976 movie Barry Lyndon and won an Oscar for their efforts. The 1980s saw the group’s popularity continue to swell. In 1983, they went to China for a two-and-a-half week tour of that country, becoming the first group to perform on the Great Wall. The group finished the decade on a high note, when in 1989 the Irish government officially named the Chieftains Ireland’s Musical Ambassadors.

But the 1990s would see the Chieftains rise to even greater heights of popularity as the group recorded several albums with all-star casts of guest stars.

Considering the Chieftains’ many achievements, it might seem that the group could feel considerable pressure to live up to expectations with every project. But Moloney says the group takes a low-key approach to its music and doesn’t get distracted from the task at hand. “With the band there’s no big sit down or weeks on end of rehearsing and, ‘Oh you should play this note this way.’ That doesn’t go on,” Moloney says.

“We’re six individuals with our own style, everybody with their own style. And we’ve been together for so long now, that it’s a great happening. We don’t like to discuss or rehearse too much, and just go for it. The pressure to do anything that we do, that’s not the way I look at [things]. I get excited about something and Matt has often said ‘I don’t know what he’s up to, that fella.’ I pursue it to the end because I can see the music, and I can see what I want to do. And I can see how it’s going to turn out.”

“I’ve been fairly OK up to now, after 36 albums and 18 nominations and six Grammys.”

Random notes: Sassy jump-blues diva Lavay Smith & her Red Hot Skillet Lickers will rattle the rafters Jan. 27 at the Rancho Nicasio. . . . Bassist Tony Levin, probably best known for his stint with King Crimson and session-work with Peter Gabriel, brings his classically informed jazz/rock fusion to the Inn of the Beginning on Jan., 28. Levin, whose distinctive bass has graced recordings by Lou Reed, Paul Simon, and many others, will perform with ex-King Crimson member Pat Mastelotto and the California Guitar Trio . . . Cajun superstars Beausoliel, with fiddler Michael Doucet, roll into the Mystic Theatre in Petaluma on Feb. 2 . . . Teen violinist Hilary Hahn, who completed a three-day engagement with the Santa Rosa Symphony this week, grabs her share of headlines, but isn’t the only noteworthy young soloist visiting with North Bay orchestras. Flutist Gary Schocker, known for his poetic and virtuosic playing, will join the Napa Valley Symphony and conductor Asher Raboy for two concerts Feb. 4 and 6 at the First United Methodist Church in Napa. Schocker, who has recorded extensively, will perform works by Rota, Rodrigo, Britten, and Dvorak. For details, call 707/226-8742.