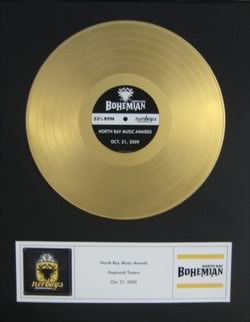 Get Ready: the 2013 North Bay Music Awards and 24-Hour Band Contest goes down on Saturday, July 13, at the Arlene Francis Center in Santa Rosa!

After the crazy packed success of last year’s party—see here for photos and video—how could we not do it again? Of course, you’re a part of it too. See below for voting, and save the date: July 13!

The preliminary votes are in! You’ve selected the five top artists in each category, and finalist voting is now live for the 2013 NorBays!. Click here to see the finalists—and to vote!.

Live music will be provided by bands assembled totally at random just 24 hours before in the 24-Hour Band Contest.

Here’s how it works: over 30 musicians have signed up for the 24-Hour Band Contest. On Friday, we’ll meet and pick names at random, assembling bands made up of complete strangers. The bands will then have 24 hours to write two original songs and learn one cover song, and return to perform the next night at the NorBays!

Signups are now closed for the 24-Hour Band Contest.

Sponsored in part by: