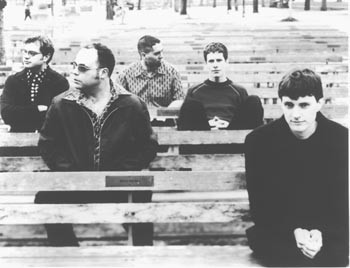 Nice nerds: The Barenaked Ladies are an antidote to butt-rock bands.

THE BARENAKED Ladies are one of those extremely rare cases of nice guys coming in reasonably near to the head of the pack. And for that alone, their music should be praised to the skies. After all, they don’t play butt-rock (a term coined to describe the type of hate-filled dumb redneck music of acts like Limp Bizkit, Kid Rock, Eminem, and others). Instead, I think of the Barenaked Ladies as a Canadian version of the Young Fresh Fellows, a band I consider one of America’s finest.

Like the Fellows, who are neither young nor fresh, this band is neither nude nor female. What they are is a plain old guitar-based rock band with a love of plain old bands like the Beatles and the Beach Boys augmented by a seriously debilitating sense of humor.

On the face of it, the Barenaked Ladies are an unlikely success story, since their lyrics are not mean, violent, or sexy. Also, they play tuneful, midtempo, funny rock–kind of in the same camp as that of Ween, the Dead Milkmen, and They Might Be Giants. Like the Giants, they excel in the live arena, where they are known for goofy medleys of rap and pop songs, precision dancing, and audience participation. In person, it is darned hard not to like the Barenaked Ladies. Yet, although they are a truly wonderful live act, they are not particularly good-looking, videogenic, or pretentious–three things that tend to be essential to success in America.

Perhaps because of their lack of charisma, their career to date has had a peculiar trajectory. In 1992, their debut LP, Gordon, sold 950,000 copies in Canada, catapulting them into stardom. Of course, it’s a lot easier to succeed as a rock band if you’re Canadian, as the government insists that all radio stations play mostly Canadian music. Even so, something funny happened to the Barenaked ones, because their next three LPs sold fewer and fewer copies, bottoming out at 150,000 in 1997.

THEIR CAREER reignited in 1998 when Sarah McLachlan’s management, hot off the Lilith Fair phenom, took them on, leveraging that Lilith Fairy clout into airplay for the 1998 LP Stunt. With constant touring–the band crossed the Canadian tundra six times in one year–and a splendid live show, the Barenaked Ladies broke into America, going triple platinum on the strength of the single “One Week,” a goofy-white-boy rap about a weeklong fight between a boyfriend and a girlfriend with the chorus “It’ll still be two days till I say ‘I’m sorry.’ ”

“It’s All Been Done,” the follow-up single, is slightly more indicative of the Barenaked Ladies’ strengths: a harmony-laden, jangle-pop tune with thoughtful lyrics and a soaring chorus. Nevertheless, although in 1998 they were one of the few bearable bands on the radio, the Barenaked Ladies have not become a household name, probably because they haven’t been able to distinguish themselves from other all-guy, two-guitar rock bands that inhabit the earth in such great numbers.

The newly released Maroon (Reprise) is the Barenaked Ladies’ seventh LP, and although it continues to provide a steady stream of catchy rock songs about problem relationships, it is also weirdly staid. Gone are lyrics like “If I had a million dollars I’d buy you some art–a Picasso or a Garfunkel” and “Like Harrison Ford I’m getting frantic/ Like Sting I’m tantric.”

INDEED, adult is the word that comes to mind when listening to this record. This could be because one member of the Barenaked Ladies, Kevin Hearn, has just completed a two-year battle with leukemia, and the emotional impact seems to have had a truly profound effect on the band’s songwriting. They’ve always been articulate, but these songs have an unexpected extra layer of depth. There’s no simple pop tune on here, no “One Week” that rhymes wasabi and Lee Ann Rimes.

Instead, there are songs like “Pinch Me,” a slow-tempo philosophical reverie about a guy who can’t figure out what the meaning of life is, and various other songs about relationships that never slip into easy answers. Then there’s “Helicopters,” which equates certain aspects of rock touring with the fall of Saigon. It is a beautiful song, with a delicately felt subtext, a great deal richer than most songs with this kind of very lightweight tunefulness and instrumentation.

Even more poignant is “Tonight I Fell Asleep at the Wheel,” which confronts quite literally the idea of dying young–without, somehow, sinking into morbidity or even depression.

In short, Maroon is a mature record–and that’s kind of an odd thing for a rock ‘n’ roll band to be. After a decade of shooting all over the charts, this may be the moment when the Barenaked Ladies find their real level, and the unfortunate thing is, it’ll probably be back down the food chain a bit–where nice guys belong.

I mean that as a compliment, though: this stuff is just too good and too subtle for the masses.