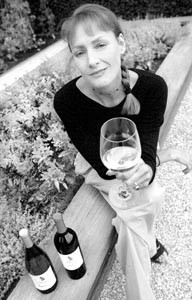 Hostess with the mostest: Former flight attendent Joni Nance entered the high-flying world of high-end wines after an encounter with President Nixon .

RICHARD Milhous Nixon was among the more complex American presidents, certainly of the 20th century and perhaps of all time. He has been portrayed as a brilliant statesman, Commie hater, shrewd politician, paranoid schizophrenic, and tragic American figure, among other guises real and imagined. More recently, a biographer even labeled him a wife beater, a charge his family has countered as being patently false. While the 1972 burglary of the Democratic Party’s headquarters inside the Watergate Hotel, and the subsequent coverup, cast a dark shadow on Nixon’s presidency, even his most severe detractors acknowledge that when it came to foreign policy, Nixon was “the one.”

History will show that Nixon’s policy of détente with the Soviet Union and diplomatic contact with the People’s Republic of China paved the way for the bridge building with those two powers for which presidents who followed would claim credit.

Joni Nance had, if not a front-row seat, then certainly an unobstructed view of much of the excitement that surrounded Nixon’s pre-fall-from grace period. In the early ’70s, Nance was working as a flight attendant for TWA.

For some reason, she caught the attention of the airline’s senior management and was selected to fly on TWA charter flights that accompanied President Nixon and his White House staff members around the world.

Little did she know at the time that her globetrotting adventures would one day lead her into the wine business here in Sonoma County.

“At a young age, I got to see Russia, China, and Europe,” Nance recalls, “and I was introduced to the best food and wines that the world had to offer.”

And so began a love affair not only with culinary pleasures, but with diverse cultures.

“I was always interested in different cultures, and traveling gave me the opportunity to learn about them,” Nance says. “Despite the extreme differences that make countries and their people seem so unrelated, it became clear to me that there’s a common thread connecting all people of the world.”

“Food and drink,” Nance opines. “No matter where you are, communities all gather around festive eating and drinking. Natural resources and human creativity lead to amazing and exotic foods and wine–and so my passion for food and wine grew.”

IT WAS OBVIOUS that Nance was destined to treat her flight-attendant experience not as a career path, but rather as a springboard. In the ensuing years, she would spend time as a fashion model–a pursuit that took her to New York, France, and Italy–and as a consultant for Gotham hotels and restaurants.

In 1993, Nance took a breather from her hectic lifestyle to spend some quality time with family and friends in California. And after sampling the high-quality wine grapes from Sonoma County, she decided to develop a small wine brand of her own.

“My vision was to create a high-quality brand focusing on varietals that are not mainstream,” she says. “No chardonnay. No merlot. And I wanted to invoke the style of European winemaking with this exciting California fruit.”

Nance dubbed her line “The Nance Collection,” and her initial releases were a sangiovese and a cabernet franc. When she wanted to add a white bottling to her portfolio, she recalled the delicate and flavorful whites that she had experienced in France’s Loire Valley.

Wine scribes often use the word nuance in referring to the subtle aroma and flavor shadings that separate great wines from good ones. In naming her white blend, Nance simply added a “u” and a hyphen to her last name and, voilà, “Nu-ance” was born.

While the reds of the Nance Collection are fine wines, it is “Nu-ance” that sets the line apart and gives it a sense of individuality. The blend of chenin blanc and sauvignon blanc offers impressions of wildflowers, citrus, melon, and tropical fruit. It is perfectly balanced, refreshing, and packed with aroma and flavor–need we say the word?–nuances.

American Cellars Wine Club, a Southern California&-based wine-by-mail venture, was so impressed with “Nu-ance” that it purchased a huge supply of the 1998 vintage to send to its members.

Unfortunately for Sonoma County residents, much of the Nance Collection’s production was earmarked for the East Coast, where wine drinkers are more accustomed to drinking European-style bottlings. But that is changing, Nance says, and her line soon will be easier to find locally. She already has deals with Traverso’s Gourmet market and deli in Santa Rosa and with Tip-Top, and a number of Healdsburg restaurants have allocations for their wine lists.

What’s next for Nance?

“The label is going to be really cool,” Nance enthuses. “And every time we release a new ‘Goddess’ wine, it will have its own name.” Which seems only fair, given the status and respect that goddesses–not to mention most presidents–command.