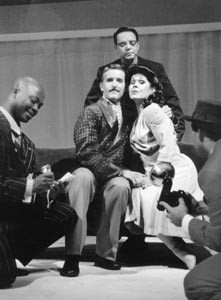 Revival of Berlin’s musical is no crowd pleaser

UNLESS ONE is making Jackson Pollock knockoffs with a parakeet and a birdcage, newspapers just don’t make good source material for artists. Playwright Moss Hart and songwriter Irving Berlin, however, mined the headlines of their day for their revue As Thousands Cheer. The result is old news.

Presented as a co-production of the Marin Theatre Company and the Allegro Theatre Company, As Thousands Cheer (directed by Danny Scheie) has long been relegated to the musical tchotchke shop. Apparently a smash when it debuted in 1933 (one must note this was in the throes of the Depression, when watching cheese age was a cheap and welcomed diversion), the revue enjoyed 400 performances, then proved its ephemeral nature by disappearing until 1990. That’s when the manuscript was discovered entombed in the basement of a Hollywood film studio.

Its grave disturbed, As Thousands Cheer has unleashed something of a mummy’s curse, wreaking its revenge on unsuspecting theater companies by garnering nasty reviews with its discursive collection of dopey tunes and underdeveloped sketches.

Admittedly, there are several toe-tapping numbers, among them the charming ode to the gossip trade “Through a Keyhole,” which includes the inspired line “If you’d really like to know how she got into the show . . . ”

Other songs, however, particularly the mawkish and artificially sweet “Easter Parade” (which presaged the invention of NutraSweet by decades), only draw attention to the fact that Berlin was no Cole Porter. If he were to go up against the Gershwins with this show, their dog would win.

Berlin can’t shoulder all the blame for this gutless revue–Hart is an equal culprit. In his sketch “Franklin D. Roosevelt to Be Inaugurated Tomorrow,” outgoing first couple Herbert Hoover (Colin Thomson) and his wife Lou (Lesley Hamilton) telephone associates and rebuke them with Bronx cheers. Such gags serve to remind theatergoers what a wonderful playwriting team Hart and longtime collaborator George S. Kaufman were. Too bad Kaufman was nowhere near this show.

As for the production itself, if the company had intended the audience to exit whistling, it shouldn’t have passed out the stale saltines that constitute this show’s musical numbers. Though Berlin’s genius (evidenced in songs like “Puttin’ on the Ritz” and “Cheek to Cheek”) is not fully realized in As Thousands Cheer, the material suffers more from its listless interpretation by the cast than from its creator’s ear.

There are exceptions–most notably C. Kelly Wright’s robust rendition of “Supper Time,” an eerie and heart-wrenching ballad sung from the point of view of a young widow, underscored by a projected image of a man strung by his neck–accompanied by the headline “Unknown Negro Lynched by Frenzied Mob.”

Carleton Alexander consistently charms in a variety of roles, including that of a lovelorn chauffeur in Berlin’s piquant ode to nascent love, “How’s Chances.”

Hamilton, easily the production’s finest actress, portrays Mrs. Hoover; an acerbic Joan Crawford who panders to the press; a newsreel director who goads a hunger-striking Gandhi (Brian Yates Sharber) to accentuate his starvation with pantomime; and an Irish chambermaid who extracts lingerie from the crannies of Noel Coward’s hotel room.

This show may have Hart but it has no soul. As Thousands Cheer is a time capsule and should have remained buried.