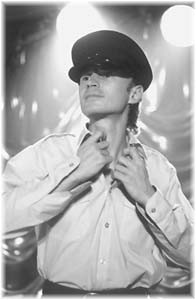 Button Down: Robert Carlyle takes it all off in ‘The Full Monty.’

Writer David Templeton takes interesting people to interesting movies in his ongoing quest for the ultimate post-film conversation. This time out, he tags along with Petra Forsman, Amy Garcia, and Kym Kelly–outspoken and oft-ogled student/waitresses–as they take in the new shoe-on-the-other-foot comedy The Full Monty.

TWENTY MINUTES to movie time,” announces Petra Forsman, checking her watch. “Chow down, everybody!” As the speed of dinner accelerates, so does the conversation, an impromptu lesson on the proper etiquette for ogling waitresses. My instructors, Forsman and friends Amy Garcia and Kym Kelly, are a loquacious and charmingly opinionated trio, bound in sisterhood through a waitressing job at a small cafe in downtown Petaluma.

While generally agreeing that being stared at by lecherous diners is a distinctly uncomfortable experience, my guests have just confessed that–with a bit of artistry on the part of the ogler–being checked out can be almost pleasant.

“The deal is, if you get caught looking, don’t look away and pretend you weren’t doing it,” offers Amy, pushing her plate back and glancing about for the check. “That’s really creepy.”

“But if you do get caught,” Petra explains, “just smile. A nice smile, ‘You caught me, and I think you’re nice.’ That feels good. The truth is that everybody checks out everybody else. We know that. We just don’t like it when [you’re] a creep about it.”

I see. Thank you. I’ll remember that.

Appropriately warmed up, we head out to see The Full Monty, a charming film in which a band of unemployed English fellows attempt to make some cash by becoming male strippers. It’s quite funny without becoming mired in its own issues, and its gentle message–that men might learn something were they the ones being leered at–strikes an approving chord among my companions, though some disagreement arises from one character’s assertion that, fat being “a feminist issue,” one overweight member of the troupe need not worry about baring it all in front of an audience of women.

“Fat’s not a feminist issue, specifically,” Petra insists, climbing into my car for the ride home. “It’s just an issue.”

“Yeah, but how many men do you see at Jenny Craig?” Amy counters from the back seat.

“Jenny Craig doesn’t encourage men to be there,” Petra replies. “The issue of fat, of feeling the pressure to conform to a certain idealized image, is not just a female issue. Everyone’s under the same pressure, though I’ll give you that the pressure is heavier on women.”

“I don’t know. I know a number of pretty big guys,” Kym chips in. “And none of them are running around freaking out about every new pound the way girls do.” There is a pause, while everyone sits nodding at the thought.

“Don’t you love it,” Petra suddenly laughs, turning around to face her friends, “when you’re out with a bunch of other women and you’re all trying to out-fat one another? ‘Oh, waitress! Make that a triple not-fat.”

“Remember when Dave [the large guy from the film, played by Mark Addy] hides in his little shack in the backyard and wraps his stomach in cellophane? Then whips out this candy bar? That was so ‘girl!,'” Amy laughs.

“Or when they’re sitting around suggesting ways he could lose weight,” she adds. “‘You could do this‘ or ‘I heard of a guy who did that.’ Girls will talk openly with each other about things like that. I thought it was nice that these guys felt so close and personal that they could do that. I suppose it has something to do with taking their clothes off in front of each other.”

“I just liked that the guys weren’t all beautiful,” Kym says. “In fact, quite unattractive, some of them. But they became attractive when they found the courage to be more or less confident of their bodies.”

“But you know what?” Amy interjects. “During the big show, when the audience was going wild and clapping and supporting them, I thought, ‘If these were women up there, women who are not physically perfect, they’d be booed off the stage.’ It would have been a joke.”

“It was a joke,” Kym contends. “That’s why they could support them.”

“But it wasn’t a cruel joke,” Amy replies. “They weren’t shouting fat jokes at them.”

“The thing is, we will never know what the situation would be if there were women on that stage,” says Petra. “Because no woman of normal shape would ever subject herself to that.

“Um, what about with an audience of other women?” I ask. “Wouldn’t they be supportive?” My question is greeted with a long silence that ultimately ends in uproarious laughter.

“When it comes to their bodies,” Kym nods, ominously, “women can be even more competitive than men.”

“And,” laughs Petra, “we have the psychological scars to prove it.”