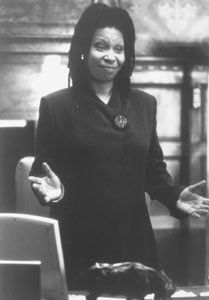 Making Whoopi: Whoopi Goldberg stars as Wall Street whiz Laurel Ayres who, in order to get ahead, passes herself off as the associate of a powerful investment counselor in “The Associate.”

Writer David Templeton takes interesting people to interesting movies.. This time out, he discusses the gender-bending big-biz flick The Associate with Karen Salmansohn, the author of an eyebrow-raising new book for women in business.

KAREN SALMANSOHN, a self-described “recovered award-winning senior executive/workaholic,” has just released a smart, subversively motivational book with the deliciously wry title How to Succeed in Business Without a Penis: Secrets and Strategies for the Working Woman (Harmony, 1996). Tremendously funny, it is a bold mix of inspirational messages, knowing tips learned in the trenches, and a veritable parade of potent penis puns.

As I sit by my phone waiting for the author to call from New York, it occurs to me that the film we will be discussing–The Associate, starring Whoopi Goldberg as a Wall Street whiz who invents an imaginary male business partner in order to be taken seriously–might have done well to take a cue from Salmansohn’s savvy sense of namesmanship. It could have been titled “How to Succeed in Business by Pretending to Have a Penis.” As this thought crosses my mind, the phone rings.

“I’m at a pay phone,” Salmansohn explains breathlessly. “My apartment is under construction, so I’ve been locked out. I did see the movie last night, though, with my boyfriend. I liked the pro-women message. And we laughed hysterically at the peeing scene.” She refers to a moment in which Whoopi, pretending to be her partner, Cutty, employs a bottle of mouthwash to simulate urination in the men’s room.

I remark that the movie’s message runs strictly counter to the central idea of her book–that women need not mirror men in order to be successful. Here we have a film where a woman caves in, subverting her own nature in order to get ahead.

“Oh, absolutely,” says Salmansohn. “I say in the book, ‘You don’t need a penis to succeed, you just need balls.’ Whoopi had enough balls to go ahead and do this scam, but if she was clever enough to have come up with this, she would have just faked a phone call from Cutty, and said, ‘Look, I want Whoopi to take over from here on in. She’s the real powerhouse.’ That could have cured everything.”

Of course, then we’d have missed seeing the spectacle of our star in Brando-esque drag, but it certainly would have been more inspiring. Salmansohn has other ideas for the heroine as well, such as taking her prospectus to women CEOs instead of only to men.

“I applauded her initial reaction of using whatever it took to get into the meeting, as long as it didn’t hurt anyone, but there came a point when she just became a wimp,” Salmansohn notes. “Also, once she brought in some money–150 grand!–from that first client, she could have come in and confessed. In the end, you know, money is respected even more than the gender you are. Money is the ultimate power.” Salmansohn pauses a moment.

“Maybe her dreadlocks were part of her problem,” she suggests. “Possibly her stumbling block was that she looked so wild. The medium is the message, right?

“When I was in advertising I would wear a different outfit for different meetings. I was a secret agent girl. I would bring along a bag of my dungarees and a T-shirt and sneaks and stuff, and change in the ladies’ room before going to a pitch session at MTV. Then go back to the office and put on my little business suit to pitch to my other advertising clients, because I understood that people want to be with other members of their tribe. The more that you can make any person feel like they can relate to you, the better chance you have of selling them your product.

“Women are so aware of appearance and packaging from all the women’s magazines out there that we can use that to our advantage,” she continues. “It’s all about seduction. And God knows we’ve read enough articles about that. Women do have the edge on knowing how to seduce. And I don’t mean that in the sexual sense, necessarily.

“I do believe that we all have male and female in us,” she adds, “and we need to find a balance in that. You have to know when to be tough and when to be nice. You can be aggressive, whether you are a man or a woman, without being a jerk. As much as I believe you don’t need a penis to get ahead, I don’t suggest you try it without a heart–or a brain.”