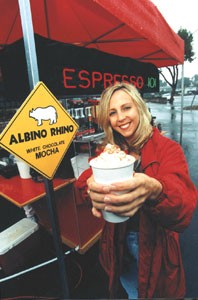 WHILE SAN FRANCISCO may be the truer birthplace of espresso culture, with its lingering images of Beat poets arguing over small cafe tables strewn with muddy cups and overflowing ashtrays, Seattle is best known for espresso carts and drive-through coffee kiosks. The arrival of an espresso cart in downtown Santa Rosa, then, marks the triumph of the Third Seattle Invasion in Sonoma County. First came Jimi Hendrix, then the power chords of grunge rock, and now, espresso carts–caffeine on casters–filling a fertile niche in the coffee business.

Decked out in smooth, gleaming metalwork, Centro Espresso features espresso in the northern Italian style with a lighter roast that lends a gently nutty bite and a subtle caramel-like flavor. “In the wine country,” Hoffman reckons, “people are open to different tastes and roasts.”

The former kitchen manager of the original Western Caffè in Railroad Square, Hoffman has reinvigorated the coffee scene in downtown Santa Rosa, offering a product with personality and a hands-on business owner you can look in the eye. Because the most remarkable thing about Centro Espresso is that it’s not a coffeehouse at all, but rather a stylized espresso cart on four wheels parked at Sawyer’s News on Fourth Street.

Acting out a “small is beautiful” concept, utilizing coffee beans prepared by “microroasters”–the small-volume, high-quality roasting operations exemplified by such local coffee purveyors as Taylor Maid in Sebastopol and Coast Roast in Tomales–espresso carts offer a fast, high-quality caffeine fix with a personal touch to coffee lovers on the move, as well as a low-cost business opportunity to aspiring food types.

“Carts make people feel good,” offers Steve Powers, the mild-mannered, bearded owner of Cheeko’s Corner, located in front of Sebastopol’s Fiesta Market. “They have a European flavor. You can buy everything off a cart in Europe.” In 1994, to create a decent-paying job for himself after a 20-year gardening career, Powers started his rolling concern as a less expensive option to the sit-down coffeehouse.

PRIOR TO 1993, state law prohibited food preparation on carts with the exception of hot dogs. But the growing interest in espresso carts led to a bill sponsored by state Sen. Mike Thompson that allowed for coffee-based drinks prepared with milk. Shortly after the county health department began issuing annual health permits for espresso carts in early 1994, these mobile java wagons started popping up in Sonoma, Sebastopol, and Petaluma; and now they’re in Santa Rosa, with one of them downtown a stone’s throw from the mighty Starbuck’s franchise. To date, 20 espresso carts, drive-through modules, and coffee trucks operate in Sonoma County.

The primary advantage of espresso carts over storefront cafes is the bottom line. “The nice thing is the capital costs can be a lot lower,” says Powers, who named Cheeko’s Corner after his pet parrot. “It takes only about $20,000 to get going, and you have lower operating costs–like less rent.”

Such affordability appeals to Robert Rose, the operator of espresso carts at both Community and Kaiser hospitals. “I always wanted to try my hand at my own business,” he says. “It was very spontaneous. I saw an advertisement in the newspaper, and a few days later I was in business.”

Lest one think espresso carts mean demitasse-sized profits, consider Deaf Dog Coffee in Petaluma, where owner Ron Salisbury’s two drive-through carts and one storefront are merely an advance team for a business plan that calls for a total of six drive-throughs and six storefronts. Salisbury, who credits the coffeehouses of Berkeley for his several graduate degrees and who really does own a deaf dog, is an experienced corporate business analyst. Notably, Salisbury’s drive-through employees stand outside their huts to serve customers in order to overcome the impersonal aspect of a drive-by coffee score.

By 1999, the nation’s specialty coffee market is expected to top $3 billion, with a solid 30 percent of that market in the “to-go” category. This means considerable opportunity for the new wave of “baristas,” those coffee-bar jockeys at the controls of those $6,000 espresso machines. Already, there are about 2,000 espresso carts nationwide.

King County in Washington state is the nation’s classic model of a fully developed coffee market. At its peak of 1,000 espresso carts, the area qualified as the “classic description of a saturated market,” according to Ted Lingle, executive director of the Specialty Coffee Association of America. Today about 400 espresso carts–a more realistic number–serve a population of 1.25 million java junkies. This ratio of carts to residents, factoring in a population of educated, upper-income folks, suggests that Sonoma County could easily gulp down another 100 espresso carts.

If cocaine, nouveau cuisine, and BMWs described the celebratory excess of the 1980s, one of the most common explanations for the espresso coffee boom is the desire for little treats in a more frugal, downsized era. “People are more apt to spend for smaller luxuries,” reasons Susan Hoffman. “Instead of thousands of dollars for a new car, they get a great cup of coffee for $1.35.”