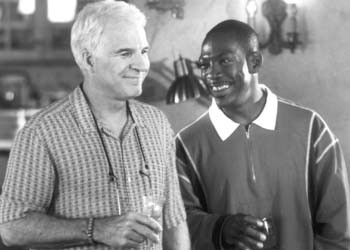 Writer David Templeton takes interesting people to interesting movies in his ongoing quest for the ultimate post-film conversation. This column is not a review; rather, it’s a freewheeling discussion of life, alternative ideas, and popular culture.

JOHN RIDLEY hates Hollywood. It says so right there in the disclaimer at the start of Ridley’s entertainingly harsh new crime novel, Everyone Smokes in Hell (Knopf), the compelling, adrenaline-addictive tale of a befuddled one-time screenwriter who, by the time the last bullet flies at the end of the book, also hates Hollywood.

“This book is a work of fiction,” writes Ridley, an award-winning director and screenwriter (Cold around the Heart) and the author of two previous novels (Love Is a Racket, and Stray Dogs, which he adapted to the screen for Oliver Stone’s film U-Turn). “Any similarities between the miscreants in this story and the actual insipid degenerates who populate the city I hate more than cancer is purely coincidental. Anyone claiming to be represented in this novel is suffering from severe closet-psychotic issues that would best be dealt with immediately.”

Though Ridley may hate Hollywood–his home for the last nine years–he did like Bowfinger.

Starring Steve Martin and Eddie Murphy, the recently released semi-satire is about a particular insipid degenerate named Bobby Bowfinger (Martin). Bobby loves Hollywood and so desperately yearns to be part of it that he will resort to anything to become a director. Kit Ramsey (Murphy) is one of Hollywood’s closet psychotics, a famous but unhinged movie star who unwittingly becomes the star of Bowfinger’s Z-grade, sci-fi schlock-flick Chubby Rain. Bobby’s miscreant cast and crew–including Heather Graham as a not-so-innocent actress wannabe–relentlessly stalk Ramsey through L.A., secretly filming his terrified reactions as he responds to knife-wielding vixens and grotesquely melting aliens.

Bowfinger, one of a recent spate of “filmmaker movies”–including The Blair Witch Project and the brand-new The Muse–is an oddly paradoxical film, part of a long tradition of movies that demonstrate Hollywood’s strange love-hate relationship with itself. Sunset Boulevard, The Player, The Bad and the Beautiful, Hollywood Shuffle, Blake Edwards’ S.O.B., and even The Valley of the Dolls all had the same conflicting messages: “Hollywood will destroy you” and “Don’t you just love Hollywood?”

Bowfinger’s script (written by Martin) is keenly critical of Hollywood–the town that Raymond Chandler once described as “a degraded community whose idealism even is largely fake.” On the other hand, Bobby Bowfinger’s Hollywood is still a place where dreams, of a sort, can come true.

“It’s an Ed Wood-type story. All these people want to do is to make movies, to be a part of the magic, and maybe they’re finally going to get to do that, because they believe in themselves.

“I think that’s a good message,” he says. “It did thumb its nose at Hollywood,” he continues, “saying that all executives are pigs who care more about their cars than their children, that stars are often paranoid and shallow. It shows Kit with his crew of drooling sycophants all around him because it makes him feel like a star. It’s thumbing its nose at all that. But it’s also saying something kind of sweet.

“In your book, the people who follow their dreams all end up dead,” I point out.

“Well, yeah. I’m a lot more cynical than the people who made Bowfinger,” Ridley says with a laugh. “Dreaming is not enough. If you come to this town expecting to make it big just because you have these wonderful dreams of fame and fortune, this town will beat the crap out of you. You’ll be like a Quaker in the ring during a prizefight. You won’t stand a chance.

“Bobby Bowfinger, though, isn’t about fame and fortune,” he says. “I thought it was a smart observation that this guy’s big dream was having the Fed Ex truck stop at his house. That’s the status symbol, the mark of having arrived in Hollywood; the Fed Ex guy walks in and hands you a special envelope. ‘Wow. I must be important now. A guy in a nice uniform just brought me this letter. And what’s inside? Someone wants me to go make a movie for them in Thailand or somewhere.’ Bowfinger’s dreams aren’t about being rich, or being famous, or having lunch at Morton’s–that typical Hollywood stuff–but it’s the little things that will make him believe he’s a success.”

THE MARKETING GUYS at Fed Ex should hear this. “Federal Express: the next best thing to fame and fortune.”

“The problem with Hollywood,” Ridley adds, “is that after a while, it grinds the dream out of you. It does become all about the car you drive and the money you make and where you eat lunch. It stops being about keeping alive those things that are important to you, keeping close to you the things you treasure most.

“Even so, I gotta say, I would never want to discourage people from trying,” Ridley adds. “If you have a dream, you should come out and try for it–but you should be realistic about how truly tough it is to make it here.”

Ridley’s advice to the dreamers is to remember the message of Bowfinger.

“If you buy into someone else’s dream for you, it’s never going to pay off,” Ridley preaches. “If you persevere long enough in your own dream, eventually it will.”