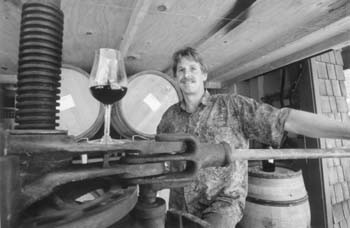 Enjoying the fruits of his labor: Winemaker John Hawley used his skills to bolster Clos du Bois and to catapult Kendall-Jackson into the viticultural stratosphere. Now he’s returned to hand-crafting his own wines.

JOHN HAWLEY has attained a winemaker’s equivalent of scaling Mt. Everest, swimming the English Channel, winning a Super Bowl. After graduating with honors from the University of Vintners, otherwise known as UC Davis, Hawley served a one-harvest apprenticeship at Preston Vineyards before being hired as the first winemaker at Clos du Bois.

During the ’80s, he oversaw the growth of the Healdsburg-based Clos du Bois from fewer than 20,000 cases to more than 200,000, picking up a ton of wine competition hardware along the way. In 1990, he accepted the position of chief winemaker for Kendall-Jackson, and over the next six years led K-J’s expansion from around 600,000 cases to more than 2.5 million cases annually.

Hawley is largely responsible for what has been called the “industrialization of winemaking,” and as he looks back on the 16 years he spent transforming wines into mega-brands, he admits to experiencing some pangs of regret. “I don’t think the people doing the work in the big wineries have the kind of fun that those in the little wineries have,” he says. “In the little wineries, it’s a different job every day. When you get in the highly mechanized places, it becomes an assembly-line procedure, and those people don’t get to enjoy the diversity or feel like they’re in the wine business. They’re just working a factory job.”

Hawley describes his tenure at K-J as “exciting,” but also “stressful.” And after a while, he adds, the long days and tremendous responsibility began to take their toll. “I had a lot of fun, dealt with virtually every grape variety from multiple appellations, learned all about the different barrel types, and was part of a dynamite team,” he says. “But I got tired of managing paper and people, and really wanted to get back to hands-on winemaking.”

Crafting his own wine had been Hawley’s lifelong goal, but he never had the wherewithal to make it happen. Not until he started earning the big bucks at K-J and holing away as much of each paycheck as possible.

Finally, in 1996–after 16 years of working for others–Hawley was ready both mentally and fiscally to take that giant step.

A few words on Hawley wine.

UP FROM HIS OWN 10-acre vineyard a thousand feet up Bradford Mountain in Dry Creek Valley, as well as those owned by a handful of other local farmers, Hawley released his first pair of bottlings: a viognier and a merlot.

For the 1997 vintage, those two varietals were joined by a cabernet sauvignon. Total case production for all three wines: 1,928. Or, approximately 29,976,864 fewer bottles than he had been making at Kendall-Jackson.

Hawley says he enjoys being able to once again take a “hands-on approach” to winemaking. “It’s going back to my roots–to what I did at Preston and even before that with my home winemaking,” he asserts. “I’m working closely with my vineyard manager, crushing the grapes, racking the barrels every three months, tasting every step of the way, and making decisions at various intervals to make an individual wine the best it can be.”

It is akin to the difference between prints rolling off a press and an artist’s original painting. Or shoes assembled in a factory vs. those formed to one’s unique foot dimensions by a cobbler.

“It’s about attention to detail and levels of control,” Hawley says. “The bigger you are, the more levels of control you lose. I was never comfortable with delegating duties, and now I don’t have to be. I enjoy doing it all myself, and I can have the confidence that each step is being done the way I want.”

And that, Hawley adds, translates into a greater degree of inner peace with the process and personal satisfaction with the final product. While working for Clos du Bois and then Kendall-Jackson, Hawley developed and adhered to a number of rules designed in large part to protect the owners’ huge investments.

Now on his own, Hawley says he doesn’t miss the regimentation. He answers only to himself, and follows only one rule. “The only rule,” he says, “is to make the best wines that I can.”