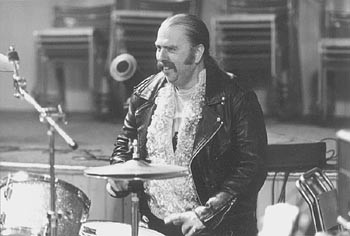 Writer David Templeton takes interesting people to interesting movies in his ongoing quest for the ultimate post-film conversation. His column is not a review, but a freewheeling discusson about life and popular culture.

AS A CHILD of the ’70s, I’ve long felt a weird love-hate nostalgia for anything representative of that decade–especially the music. Though genuinely embarrassed that I still know all the words to songs like “Hurry on, My Wayward Son” and “Come Fly Away,” I need only hear a few bombastic chords of such tunes to launch me headfirst into a helpless fit of loud karaoke and some not-so-youthful spasms of high-energy air-guitar.

This being my attitude, I shouldn’t have been too surprised at my roller-coaster response to the beguiling British comedy-drama Still Crazy.

A funny, surprisingly emotional coming-of-middle-age story, it’s about a pretentious ’70s rock band called Strange Fruit (think Journey, only more so) and the attempts of its scruffy, declining members to launch a reunion tour after 23 years of musical obscurity. The film stars Stephen Rea as the band’s guitarist–forced into stocking restroom condom machines for a living–who still longs for the glory days of his youth, and Billy Conolly as the roguish roadie who rejoins Strange Fruit, mainly out of curiosity about whether the mismatched bandmates can keep from self-destructing this time around. The film features songs written by Mick Jones of the now defunct Foreigner and Jeff Lynne of the equally absent Electric Light Orchestra.

I leave the theater humming, but within an hour, I feel the sharp pinch of melancholia nipping at my mind. Still Crazy, with its bittersweet, youth-cannot-be-reclaimed, let’s-all-mourn-the-days-gone-by overtones, is beginning to bum me out. I need a touchstone, someone to ground me to the present while helping me put my feelings into some historical context.

So I call up Dr. Demento.

“Oh my,” sympathizes the good doctor, alias Barry Hansen, internationally renowned for his groundbreaking ’70s radio show and still playing his surprising mix of musical oddities and rare recordings on over 100 stations around the world. (Currently, there are no Sonoma County stations running the Dr. Demento Show, though an energetic letter-writing campaign is under way to coerce KFOG in San Francisco and KFOX in Santa Rosa to return the show to their airwaves.)

“I kind of felt what you did when I saw Still Crazy,” Demento admits, “only in reverse. I felt bad for these poor guys at first, but later on, I really started rooting for them. ‘You can do it! Get your act together.’ I found that it all rather tugged at my heartstrings. Not that it made me miss the ’70s or anything.”

When not spinning his offbeat tunes, Demento maintains his reputation as a respected musicologist, with a scholarly knowledge of rhythm and blues. Before making a name for himself in the ’70s, the young Barry Hansen worked the fringes of the Los Angeles rock-and-roll culture, playing keyboards in a short-lived band called King David and the Parables, and working as a roadie for the colorful electric hippie-blues band Canned Heat.

“As a former roadie,” Demento remarks, “I somewhat identified with the Billy Conolly character. It made me somewhat wistful for my roadie days.”

“You know, in the movie it was the roadie got all the groupies,” I point out. “From your personal experience, can you corroborate the accuracy of that?”

“I don’t have anything to report there,” Demento says, chuckling. “Canned Heat didn’t attract that many groupies while I was with the band. What can I say?”

RETURNING to my nostalgia for the ’70s, Demento offers this musical synopsis.

“To me, what the ’70s did for mainstream rock and roll was that it took the ideas of the ’60s and refined them, made them bigger and more impressive-sounding. Because, among other things, studio technology improved incredibly during the ’70s. Instead of four tracks, you had 24. You had better noise reduction. There were just so many more things you could do.

“The songs themselves,” he notes, “didn’t evolve very much, if at all, from what was being written in the ’60s. But they could make them sound so fine that people were fooled. The other big invention of the ’70s, of course, was the ‘Power Ballad.’ “

“Exactly,” he affirms, replying so quickly that I don’t have time to confess knowing the lyrics. “The kind of song that could inspire 20,000 concert-goers to all wave their lighters in the air at the same time. It formed a strange kind of community, all those people with their thumbs on their lighters. Whether the song was a piece of dreck or not, it sounded damn impressive.”

“At the end of Still Crazy,” I mention, “the Fruits sing their own bombastic power ballad, ‘The Fire Still Burns.’ “

“Which was either just good enough or just bad enough to be a believable ’70s rock anthem,” he says.

“Oh, I agree,” Demento says. “It’s the classic rock-and-roll desire to never fade away. Even so, it’s normal for bands to rise up and then fade away. It’s been the case through the 20th century that most generations of kids despise the music that their parents listened to. That’s the normal evolution of pop music. Fortunately for bands like Strange Fruit–and even for real bands like Styx–some kids defy the age-old trend and end up getting into the music of previous generations.

“To these open-minded individuals,” the good doctor says with one last chuckle, “belongs the history of rock and roll.”