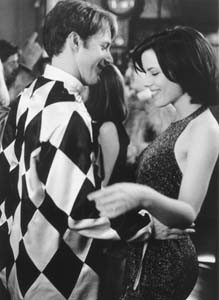 Trapped at ‘The Last Days of Disco’

In his ongoing quest for the ultimate post-film conversation, David Templeton unwittingly invites Elizabeth Hess, who has written about her experiences as a volunteer at an animal shelter, to see the wrong movie–The Last Days of Disco.

ELIZABETH HESS grabs a seat, glancing expectantly around this tiny, private screening room in downtown San Francisco, as a motley parade of local film critics file in, nodding and gabbing, to claim their own slots before the lights fade and the movie begins.

We are here among esteemed arbiters of cinematic culture ready to enjoy an advance screening of The Horse Whisperer, Robert Redford’s much-anticipated film version of the Nicholas Evans bestseller–the tale of a traumatized horse and the man who truly understands it. Hess, a New York-based art critic and Village Voice writer, is taking a break from a long, grueling, multi-city book tour to promote her own well-received book, Lost and Found: Dogs, Cats and Everyday Heroes at a Country Animal Shelter.

A chronicle of Hess’ experiences as a volunteer at a rural animal shelter in upstate New York, Lost and Found is an enchanting, eye-opening record of true events, some heartbreaking, some absurdly funny, as a team of dedicated volunteers fight for the lives of numerous castoff dogs, cats, rabbits–and even traumatized horses.

The room darkens. The curtains slide open. Loud dance music blares at us as the opening credits flash on the screen, between images of twirling lights and gyrating, bell-bottomed youths. Down in the seats, puzzled looks are exchanged in all directions. “This is The Horse Whisperer?” Hess murmurs. Evidently not.

Owing to a largely unannounced change in the schedule, we are now watching The Last Days of Disco–by renowned indie director Whit Stillman–featuring an entirely different breed of animal than the one we’d been expecting.

“I guess I can handle two hours of disco,” my guest shrugs, heroically.

“Maybe there will be horses in it,” I hopefully suggest. “Or at least a couple of dogs.”

Aside from a little terrier who shows up only to be kicked by the film’s disco-loving heroine, the only dog on screen is the movie itself, an aimless, rambling mess in which a pack of shallow, self-obsessed New Yorkers treat each other badly, slip in and out of each other’s beds, whine incessantly, and occasionally hit the dance floor.

“Maybe it’s a movie you had to be in the mood for,” Hess graciously suggests, once it’s finally over. Having fled the screening room, we’ve taken refuge at a coffee bar around the corner. “I live around the corner from where Studio 54 was,” she points out. “All those places were in my neighborhood. For a movie, the dullest club scene they could possibly find was the disco scene. What a bore.

“And that poor little terrier,” she adds, with a roll of her eyes.

“I did like the scene where they were sitting around talking about Lady and the Tramp,” I interject, referring to an argument the disco kids have over whether Tramp–the dog hero in Disney’s celebrated 1955 film–embodies a veiled message to little girls that scoundrels with prison records (he escaped from the pound) are more exciting and desirable than nice, loyal fellows like Lady’s next-door neighbors, Trusty and Scotty. The scene ends with the kids debating which of the guys is most like Tramp and which most like Scotty and Trusty.

“Ever since seeing Lady and the Tramp when I was little,” I further confess, “I’ve always been afraid of dog pounds and animal shelters.”

“Of course,” Hess nods, compassionately. “In those movies the shelter is always ‘the bad place,’ the place of death and gloom. And in fairness, some shelters are pretty scary, and some are even scarier than others.

“I think shelters make us feel badly about our own limitations,” she continues. “You walk through a shelter, and you see all those animals, and you know that they’re there because their owners screwed up, couldn’t keep them, let them go, dumped them.”

“Is there a connection,” I wonder, “between the disco kids’ attitude–ferociously pairing up only to dump each other and pair up with someone else–and the disposable attitude that leads to so many abandoned animals?”

“Good for you. Of course. That’s right,” Hess replies. “One might say this movie reflects the increasing shallowness of our culture. For me, it was no small realization, seeing how easily these live animals are discarded. There is a callousness in people that I saw. I remember one woman who brought in the family dog, a Labrador they’d had for years. On the form she wrote, ‘No more room in the back yard.’ And we asked, ‘Small yard?’ She said, ‘Oh no. It’s a big enough yard, but we just put a swimming pool in and now there’s no more room in the yard.’

“One of my favorite cases was someone who wrote, ‘Have company coming for weekend. House is too full.’ No more room at the inn. Sorry. Good-bye. And you’d be amazed how many people come with an old dog or cat and say that it’s a stray they just found. But they know its name, and it’s cowering in their lap, afraid to leave them. And one call to their vet tells you he’s been treating the animal for 15 years; they’re just too embarrassed to admit they would give up their pet.

“It’s like the movie,” she adds, “the way they’d make up elaborate excuses for dumping someone after one or two nights, the lengths they’d go to in trying to leave one relationship for another. People say the most outrageous things in order to feel better about giving away their dog.”

“So then,” I ask, “could you say that the moral of the movie is that a whole generation learned how to treat each other like animals?”

“Perhaps,” she nods, thoughtfully. “Except that animals are far more trusting and forgiving of us than we are of each other.”