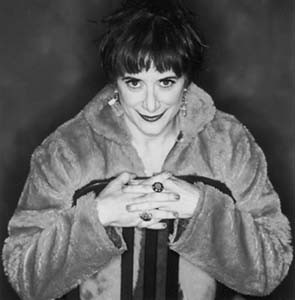 Ever lovin’: Linda Jaivin finds most things, including asteroids, sexy.

In his ongoing quest for the ultimate post-film conversation, David Templeton discusses interesting movies with interesting people. This time out, he gets eroticist Linda Jaivin’s loving reaction to the comet flick Deep Impact.

Even so, the very notion of an asteroid as a symbol of sexual energy and blind, unrestrained desire seems a bit of a stretch. But not to Linda Jaivin.

“Asteroids are very sexy!” insists the Australian- based author, stepping from a darkened San Francisco theater where we’ve just seen the film Deep Impact (a neat new thriller about a killer comet aimed at Earth, the astronauts who hope to blow it up, and the last-minute actions of various humans attempting to prepare for extinction). “Asteroids and comets are all force and energy and heat and motion!” Jaivin exclaims. “It’s not difficult to see the sexiness there at all!”

Jaivin, who enjoyed the film–“I swear I never breathed once during that whole impact-tidal wave scene,” she merrily recalls, “though I’m disappointed no one tried to surf the tidal wave”–is the author who created an international publishing sensation with last year’s riotous, comic-erotic Eat Me, which the ever-upright New York Times refused to review because of its scandalous title. Now, having made fruit-fetishism the topic of worldwide conversation, Jaivin is back with Rock ‘n’ Roll Babes from Outer Space. An outlandishly delightful, X-rated science- fiction fantasy, the new book–in which three sexually adventurous aliens become Earth’s greatest rock band–reads like the insatiable literary love child of Douglas Addams, Kurt Vonnegut, and Susie Bright.

It is no surprise that asteroids figure prominently in the book as well.

“Eros!” Jaivin laughs, naming the wildly lustful asteroid who follows the babes through space, with fantasies of someday colliding into Earth. “Eros is big! He’s hormonal. He’s young, and he’s only experienced one good party his whole life–and that was the planetary explosion that gave birth to him in the first place. Since then he’s been consigned to orbit Mars, which is dusty and boring, with no chance of getting any sex at all.”

“Asteroidal sex,” I point out, “is not a concept most people are familiar with.”

“Not only can people not believe I’ve anthropomorphized an asteroid,” Jaivin laughs, taking a seat (we’ve arrived, appropriately enough, at the Hard Rock Cafe), “they can’t believe I’ve given him a sex life.

“Asteroid sex, of course, is when they collide with one another,” she explains. “In the asteroid belt there are constant collisions. This is what keeps them going. They love it. “

“A punk rock thing,” I observe.

“A punk thing, exactly,” she laughs. “The asteroid belt is a bit of a mosh in space. And Eros–no other asteroids will collide with him! So he gets no action whatsoever. He’s very, very frustrated.

“And then he starts imagining colliding into Earth– the ultimate asteroidal orgasm, to, you know, plunge into Earth’s soft surface, to penetrate to her core. To make a deep, deep impact.

“I’ll say something else about Eros,” she adds. “He’s an actual asteroid. Eros 433 is an actual asteroid. I discovered it while I was doing research for the book, in June of 1996. This asteroid, scientists have discovered, is likely to break out of its orbit somewhere between 150,000 and 1.5 million years from now–and will probably come crashing into Earth. And it will have a much bigger impact than the one in the movie certainly, and probably bigger than the one that killed the dinosaurs.”

“So the world may eventually end in one immense asteroidal orgasm,” I marvel.

Our lunch arrives, and Jaivin pushes Altoid, her green teddy-bear purse, out of the way to make room for her hamburger.

“I was thinking,” she says, reaching for the ketchup, “about all those space movies full of aliens that flourished in the 1950s, during the Cold War. We all know that they were really about our anxiety regarding communism–with the aliens standing in as communists, waiting to take over and eat our brains.

“But now it’s a different kind of fear we’re experiencing,” she continues, whacking the ketchup bottle on its rear. “It’s a millennial nervousness we’ve got now. It’s a fear of global warming, the melting of the icecaps, too many CFCs released into the air, and all that.

“It’s a feeling that nature is waiting to get us, because we’ve gotten nature. This film today reflected that kind of anxiety, don’t you think? The natural forces of the universe have suddenly become a malicious, life-destroying force. If the aliens were a stand-in for Russians, the meteor is a stand-in for nature.”

She stares at the unyielding bottle.

We launch into a discussion of the lottery shown in the film, determining which Americans will be allowed to survive the comet’s “extinction level” collision by living for two years in deep limestone caves. As the buses leave for the caves, people agonizingly wrestle with giving up their seat for others. There are many tearful goodbyes.

“And did you notice,” Jaivin mentions, “that no one said, ‘Hey! I’ll never see you again, the comet is almost here, so let’s just fuck one last time?’

“I mean really!” she laughs. “If I were about to die in a massive tidal wave, I’d want to go out with a smile on my face, know what I mean?”