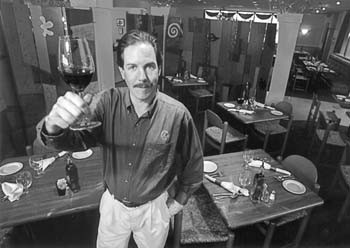 Hand of fate: Nearly 30 years ago, circumstances led Michael Hirschberg to the kitchen. He’s been a staple on the local haute cuisine scene for almost that long, helping to nourish the county’s reputation as a food capital.

For Mistral owner Michael Hirschberg, the (foodie) world is a stage

I WANTED to be a rock star when I was 15,” confides Michael Hirschberg, owner of Santa Rosa’s Mistral restaurant, as he leans slightly forward against a polished rosewood table. “I wanted to be paid to be adored, or something egomaniacal like that. But by the time I got to college, I realized I couldn’t play guitar to save my life.”

Hirschberg then turned to poetry, but the muse was fickle. That’s when fate stepped in. It was the early ’70s, a good time to leave New York and follow his friends out to San Francisco, where they all lived in a big house and he learned to cook.

“Everybody else was working and I just stayed home and puttered around in the kitchen,” he recalls.

Hirschberg became the designated cook, and the compliments–“You oughtta open a restaurant”– eventually clicked. “I finally found my little niche where I could get my kudos.”

Kudos, indeed: The many Sonoma County restaurants and projects that Hirschberg has been involved in have garnered a lifetime of approval for the slender, hyperactive man whose business-crisp shirts do nothing to hide his bubbling enthusiasm. Mistral, a comfortable Mediterranean-French restaurant, has been a magnet for local food lovers and winery events since it opened in 1996. From 1985 to 1996, he managed Sienna in the same location, and before and during that, he was the chef-owner of Matisse, which was a nouvelle-cuisine landmark in downtown Santa Rosa. In the middle of it all, he founded Mezzaluna Bakery, which he sold last year; served in the food association Select Sonoma County in various capacities for years; and, at the very beginning, ran a vegetarian establishment called the Mandala Cafe.

None of it would have been possible without Hirschberg’s junior year of study in Europe. “[My travel buddy] and I were both petrified,” he says. “The food was the most intimidating thing about going to Europe. ‘What if the food’s weird?’ we thought.”

As it turned out, the food was weird: the first place the hungry travelers landed was in northern England. But once again fate had other plans, leading them to London and Hirschberg’s first food revelation: Indian restaurants. They’re a dime a dozen in London, but Hirschberg, a picky child raised by a Betty Crocker mom, was blown away.

“I had never eaten anything like that,” he says with a big grin. “We went out all the time and tried those red-hot spicy dishes. We’d get giddy, laughing and sweating, gulping down the water.”

Things on the Continent–France, Italy, and Spain– were a little calmer, but the wide-eyed Hirschberg still spent a good portion of the day walking around and scanning menus.

At that point, Hirschberg began fantasizing about opening a cafe, with curry and “weird” European dishes on the menu. Within a few years of returning to the States, he got a place with his aunt out on Guerneville Road and opened the Mandala Cafe in 1974, at the age of 22. He had a big organic garden, work that he loved. Then, in 1981, he had to go and ruin it all: He went to France.

HIRSCHBERG sold the cafe and flew off with his wife-to-be, who found work as a pastry chef apprentice, leaving him plenty of time to solicit for unpaid positions at the doors of some of France’s top kitchens. Some chefs laughed; others handed him bags of potatoes to peel; but a few came through with the kind of hands-on training he was after: “This was in the days of nouvelle cuisine. Well, now it’s old cooking, but at the time it was Disneyland to me,” says Hirschberg, eyes sparkling with remembered excitement.

After a year in France, he returned to Sonoma County only to find himself saddled with his old restaurant, which had reverted to him when the buyer went bankrupt. Fully intending to sell the place, Hirschberg ended up reopening it himself in 1983 as Matisse. “What I wanted to do was show people what I learned in France,” Hirschberg says.

The 1980s–which saw a surge of haute cuisine in Sonoma County–proved the perfect time for Matisse, with its elegant cuisine catering to the lobster-and- chardonnay cravings of a conspicuous-consumption society. Says Hirschberg, “I remember reading an article that was, like, ‘We just flew down to Los Angeles and had dinner at Spago and spent $900 on dinner for just the two of us, but it was just wonderful.’ No one talks like that anymore… . People would look at you like, well, why would you do that?”

People are beginning to feel a bit more extravagant again, after the shock of the recession in the early ’90s. But there is no going back to the Matisse days, Hirschberg says. “We’re not trying to pretend that this is the court of Louis XIV.”

THESE DAYS, Hirschberg doesn’t work in the kitchen much himself, leaving the details of Mistral’s food to new chef Pascal Chureau. The shift was inevitable; for a time he managed two restaurants, and clearly could not cook dinner in both places at once, and so found himself spending more time out in the dining room. “I used to be an introvert”–many people, he acknowledges, would snort in disbelief–“but I made myself go out there. Now I know so many people, and I feel much more connected with the whole thing. I still monitor the food, but then I’m watching it being served.

His affinity for the public sphere is only one of the changes that Hirschberg has undergone since his hippie days. For one thing, he isn’t a vegetarian anymore. “I think it’s a very wise way to eat; I really honor it a lot,” he says. “I just don’t do it. Maybe I’m lazy, or just very sensual… .

“Sometimes I think that when I’m in my 60s I’ll get wiser and more in touch with some of the values I had in my 20s. When you’re in your 40s you just have to become materialistic to a certain degree, to raise children, run a household, run a business.”

This and other comments suggest that Hirschberg is not entirely comfortable with the financial success and broad appeal of Mistral. But now he has the freedom to spend time with his wife and two teenagers. And even as he gets up to deal with the pre-lunch clamor, Hirschberg’s last words make clear that adolescent fantasies have given way to deeper roots that ground him during the busy days. “Even when I was a hippie, I believed in ‘chopping wood, carrying water,'” he says. “You know, that Zen approach. Work is noble, work is good, you did it, and if you did it well, you got rewarded somehow [in a spiritual way].

No ordinary salad, this chilled, subtly spiced dish–one of Michael Hirschberg’s favorites–is great to toy with on warm nights.

Several hours in advance: Preheat oven to 350 degrees. Sprinkle marinated chicken with salt and bake for 40 minutes, or until done. When chicken is cool, remove meat from the bone and julienne. Toss chicken with raisins and pine nuts.

To prepare couscous, boil water with butter, stir in couscous, and bring back to the boil. Cover and remove from heat. Let stand till water is absorbed. Pour out on a baking sheet to cool, then break up any lumps with your fingers.

Combine all the remaining seasoning ingredients, then toss with couscous. Arrange couscous in a small pile or shape in a cylindrical mold. Top with chicken mixture. Encircle with dressed lettuce. Serve with sparkling wine or Gewürtztraminer. Serves 4.