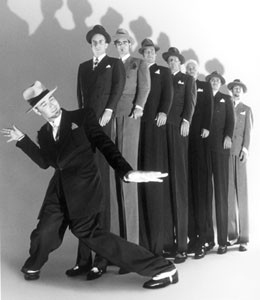 DRUMS POUND, feet tap, fingers snap. A sultry voice begins to croon, and suddenly the horns make their entrance. Man, these cats have got rhythm, and now the vintage-clad crowd is boogying with unharnessed glee. “Go, Daddy!” shout the dancers that make up the fringe of a circle, as a boy in a zoot suit flips and flings his glamorous-looking partner with wild abandon.

Welcome to the swing scene, where the music, dance, and style of the 1940s have been revived with a passion.

You might remember the little big band Big Bad Voodoo Daddy from the 1996 cult film Swingers. The eight-man unit–which began as a trio from Ventura with a love for blues and rockabilly–is one of the front-edge bands of the up-and-coming neo-lounge scene. They have released such hits as “You, Me & the Bottle Makes 3 Tonight” and “Go Daddy-O,” along with a cover of Cab Calloway’s classic, “Minnie the Moocher.”

For the first time in 50 years, not one but two swing bands (the other is the Cherry Poppin’ Daddies) have made it to the Billboard Top 100 and stayed there. Big Bad Voodoo Daddy’s eponymous major label debut, which was released in February, started on the pop chart at No. 64 and has stayed in the Top 100 for the past 13 weeks. It is expected to go gold in July.

“We used to listen to a lot of Dixieland and big band and [Scott Morris, the singing, songwriting, guitar-playing bandleader] thought it would be a good idea to mix around those styles,” explains Kurt Sodergren, the band’s drummer. “People reacted warmly from the beginning; it just kind of worked.

“I think it worked because it was different. At that point, the big thing was alternative [rock], and people wanted something refreshing and a little offbeat to add onto that. In Ventura, there was no swing movement when we started playing. Right around the time we released our first record we saw Royal Crown Revue play. We were already playing swing music, but then we knew that we were going to really have to bump it up ’cause these guys are the masters.

“We don’t want our record to break out and get superduper-million platinum, though,” Sodergren says seriously, “because we don’t want anyone to get sick of us.”

Big Bad Voodoo Daddy are serious about “keeping it real” and remembering their roots. Although they are signed with the major label that has represented such musical legends as Pink Floyd, the Beatles, and Frank Sinatra, since 1994 the band has maintained its own record company as well and has been doing all its own business and advertising.

“We have total artistic control, and it’s really important to us to make great music but to keep our feet on the ground,” Sodergren adds. “We realize that the reason we’re here is because people enjoy our music, and because of the fact that Swingers went across the country and got our name out there.”

On the topic of Swingers, a few war stories from the filming are revealed, such as the time when the air conditioning went out in the middle of August and the band sweltered through the afternoon in wool suits, or the occasion when they were asked to be sure to get everything right on the first take because the movie was being shot on such a low budget.

“Of course, we knew who [Swingers co-star] Heather Graham was from Twin Peaks, but it was no big deal–we sat, we ate dinner with everybody, we hung out. But later on when we were on tour, we went and saw Boogie Nights and when she stripped out of all of her clothes, we just all got quiet for a minute. We realized, oh, that’s Heather Graham.”

When asked to predict the future of the swing revival, Sodergren replies, “Swing music has been here the whole time, since the ’40s–it never went away. It was just overshadowed by rock and roll. At this point maybe people are a little sick of that. I think it’s really going to be make or break time, at least for the scene. People are getting into it, and that makes sense because men and women should and do love to dance together. It’s really up to them, though, if they’re going to stick with it.

“But even if the scene disappears tomorrow, there are a lot of great bands that have emerged from it, and I think they’re going to stick around.”