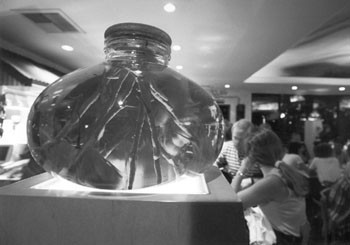 Night-owl cafe: Higher Grounds is one of the few places in Santa Rosa serving after 10 p.m. on weeknights.

Where to dine after nine?

AFTER CATCHING a Sunday evening movie a few weeks ago, my friend Panna suggests we find something to eat. “There’s a Thai place down the street,” she says. “Great noodle soup and cheap.” Sounds like just the ticket. Then I look at my watch and groan. “It’s almost 10 p.m. Do you think we’ll make it before it closes?”

Not to sound bitter about it, but Sonoma County’s night-owl eating options are slim pickings. The lackluster late-night dining scene here is tantamount to cruel and unusual punishment for those of us who work late or just enjoy eating and socializing after prime time.

When I moved here from San Francisco a few years ago, I didn’t expect the same kind of culinary opportunities as those in a bustling city. After all, there are trade-offs for escaping big-city parking problems, crowds, urban crime, and high rent. But I’ve had too many evenings of leaving work at 10 p.m. and driving aimlessly with a grumbling stomach, peering for a lit restaurant sign. Sorry, deep-fried zucchini at a bar or boxed macaroni and cheese isn’t my idea of quality living.

But before I surrendered to the belief that I’d been relegated to live in a provincial, small-town, sidewalks-roll-up-at-9 p.m., non-city-of-a-city burg, I figured I should do a little investigating. Maybe I just didn’t know the secret cache of late-night dining opportunities.

So I placed an ad in the Independent: “Seeking late-night dining. Sonoma County ain’t the big city, but does that mean that everyone rolls up with the sidewalks at dusk? Is it possible to get a meal after 9 p.m. (10 p.m. and later even better)? Conducting serious research… . No fast-food franchises or greasy bar fare, please.”

In two weeks, I received exactly two responses: “Unfortunately, I have no tips, but am very interested in finding the same information and would like to share any leads either of us may come up with,” wrote Serena via e-mail.

From Michelle Romero: “You’ve hit on my biggest complaint since moving back to Sonoma County after 12 years in L.A.: Where to dine after nine?”

As co-owner of Higher Grounds cafe in Santa Rosa, Romero did have valuable information: The cafe serves vegetarian meals until midnight. Hallelujah! The problem for her, of course, is that she and her husband don’t want to spend every waking moment at their business. “I long for the days of California Pizza Kitchen, or Chin Chin’s Chinese, or a trip downtown for hole-in-the-wall Chinese that is out of this world. I would love to see a guide for the late-night dinner party. Please!”

Romero begged via e-mail. “Maybe other business people aren’t aware that there are those of us who walk the rolled-up sidewalk seeking food and entertainment after 9 p.m. seven nights a week.”

Sorry to be the bearer of bad news, but during the week, 9:30 p.m. seems to mark the restaurant witching hour (an hour or so later Friday and Saturday). And if you want to indulge your late-night palate any place in the county but Santa Rosa, your options are severely limited.

“I’ve been here 23 years,” says Cricklewood restaurant owner Michael O’Brien. “In the beginning we served dinner until 10 p.m. and it was busy. Now there’s not enough business. We struggle keeping it up after 9 o’clock. We just have staff standing around doing nothing.”

O’Brien, former president of the Redwood Empire Restaurant Association and a night-owl eater himself, thinks late-night dining is falling out of favor everywhere. “Even in San Francisco it seems there’s not as much choice late as there used to be,” he says. “I think it’s a change in the drinking habits [and stricter drunken-driving laws] more than anything else. People drink less and are concerned about getting arrested.

“It has brought about a lifestyle change.”

Too bad that alcohol has put a damper on the late-night lifestyle. Sure it’s nice to have a glass of wine in the evening. But what late eaters crave is quality food: pasta with greens, a steaming bowl of udon, a crisp salad with grilled chicken, deep-dish pizza, a juicy burger, pad thai–all of which is available in abundance in Sonoma County.

In the interest of night owls everywhere, we’ve compiled a selected list of late-night eateries. The criteria for making it onto the late-night dining list were “real” food (sorry, nachos and pre-fab microwaved stuff doesn’t count), a modicum of atmosphere (no fluorescent-lit fast-food joints or chain restaurants), and food service until at least 10 p.m. on weeknights. Beware of posted hours: One new Santa Rosa restaurant said it was open until 11 p.m. But when a thrilled late-night-dining devotee went in a few weeks ago at 9:30 p.m., the place had “run out of food.”

As of last week, a cafe near Airport Cinema 8 was advertising weekday hours until 10 p.m., but a phone call revealed that it actually closes an hour earlier. Many brew pubs and bars stay open until the wee hours, but close the kitchen around 9 p.m. “One of my customers is a student who commutes from the city every day and is trying to get her husband to move up here. Of course, with school and work they are also late eaters,” Romero says. “His first comment when I met him: ‘Where do you guys go to eat around here?'”