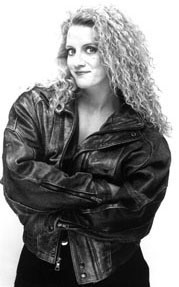 FOR ALL THE MEDIA hoopla surrounding the Ellen DeGeneres sitcom, you might assume that gay comedy has come of age. Don’t bet on it, says Suzanne Westenhoefer, who is as close to popular success as almost any other gay person playing the stand-up comedy circuit. The first gay comic to have her own HBO special, Westenhoefer has released a comedy CD and regularly plays to packed concert halls. Though the brash blonde is not quite as all-American as other blonde lesbians we might know, she plays relatively well in Peoria, as they say.

But Westenhoefer–who headlines the upcoming Gay and Lesbian Comedy Night at the Luther Burbank Center–is quick to reject the notion that she in particular, and gay comedy in general, has hit the mainstream.

“It’s evolving very quickly, but I wouldn’t say it’s mainstream,” she says forcefully. “Most good comics are not mainstream. By the time they mainstream they lose a lot of their edge.”

Maybe mainstream isn’t exactly the right word. What about evolution? Integration? Assimilation? Invasion? Something’s up when the flagrantly butch Lea Delaria appears on Broadway to rave reviews; when clearly queer comics like Sabrina Mathews and Scott Capurro appear regularly on Comedy Central cable TV specials; and when lesbians and gay men get applause at straight open mikes and comedy clubs all across the country, even when it’s not Pride night.

Whatever you want to call the state of gay comedy in the late ’90s, it’s a far cry from the scene a mere 20 years ago. Tom Ammiano, a San Francisco supervisor who pioneered the gay open mike in 1979 at San Francisco’s legendary Valencia Rose–a converted Mission District mortuary painted in soft pink– remembers the club as being a supportive place for gay comics to develop stand-up skills without getting killed.

“I had always wanted to do stand-up, but when I tried the [straight] open mikes, things got hostile very fast,” says Ammiano. “A lot of comics would tell fag jokes, but a fag doing it was a different story.”

Doug Holsclaw, a solo performer and playwright who started doing stand-up at Valencia Rose in 1983, found the welcoming vibe there to be almost therapeutic: “All of the sudden, all of the things that had been bad in your life, that you tried to sweep under the rug, became positive things, and that’s why people liked you and came to see you.”

And comedian/columnist Karen Ripley remembers when gay comedy venues opened up right and left to accommodate the burgeoning scene. “The straight comics were jealous,” she says. “Some of them even lied and said they were gay.”

But that cozy world split apart in the decade that followed, as an AIDS-weary and angry gay community grew tired of being in, but not altogether of, the non-gay world. A “second wave” of comics emerged, youngsters who had always planned to do straight clubs and found some space in them after the first wave had pushed the envelope. Westenhoefer was part of the second wave, as was L.A. comic Sabrina Matthews, who readily acknowledges her inheritance and her responsibility to pass it on. “As much easier as it was for me to go into straight rooms, that’s how much easier it will be for those who come after me,” says Matthews.

Until recently, the sheer paucity of gay representation placed a huge demand on those who broke through. “The first few years, when there were a lot fewer of us, I had to be really heavy-handed,” says Westenhoefer. “Gay, gay, gay, gay, gay. Me and my gay life. It was fine, but if I started going off on a little tangent about my dog, the audience wasn’t into it.”

These days new, more relaxed material has emerged to accompany gay comics’ expansion into “het territory.” Doug Holsclaw has witnessed this broadened scope in his work as associate artistic director of San Francisco’s acclaimed Theatre Rhinoceros. “As gays become more integrated into the world at large, the topics are expanding,” he says. “Now I can get up on stage and talk about movies or politics or whatever.”

That doesn’t mean he’s ready to go out there and be Mr. Universal Appeal himself. “I’ve never had the desire to try and make a room of straight people like me,” he says. “I couldn’t do it in high school, and I’m not interested now. It’s like, do I really want to repeat eighth grade every night of my career?”

Separate. Integrate. It’s an ancient quandary for gay men, lesbians, and bisexuals that feels both relevant and confusing when one looks more closely at the progress of gay comedy in terms of roles being offered. Being queer is still a liability–“We are no longer the flavor of the month,” says Matthews dryly–but trying to land mainstream gay roles or spots in shows carries its own particular risk.

Says Karen Ripley, “I’ve heard gay comics saying they went to these auditions where they were looking for gay people, and the director said, ‘You’re not gay enough.'”

“Mark Davis is on television [as Ashley on the now-canceled Fired Up], and he’s pretty much doing a queen,” Ripley continues. “He’s extremely talented in many areas, but right now they have him doing limp wrists.”

TOM AMMIANO concurs. “They’re looking for things that will broadcast that you’re gay in the most stereotypic way, rather than just integrating you into a plot,” he says. “We have to be careful of being labeled, rather than having an identity or sensibility.”

But the line is fine between integrating and maintaining cultural pride. “You don’t want to assimilate to the point where the differences aren’t there,” Ammiano adds, “because the difference give you the edge.”

The edge, of course, cuts both ways these days as queer comics and their fans struggle to make sense of Degeneres’ humiliating dismissal from prime-time television. “I don’t think we’re going to see a gay or lesbian star of a sitcom for a long time–maybe five years,” predicts Ellen Maremont-Silver of We Mean It! Productions, the two-woman team that produces the annual gay and lesbian comedy night in Santa Rosa. Nonetheless, Elias believes that incidental gay characters on TV and in the movies will continue to proliferate, and that gay and lesbian stand-up comedy will survive.

Westenhoefer, meanwhile, remains untroubled by the conflict between mainstream dreams and alt-edge reality. Her sitcom is slowly making its way through the Hollywood machine, giving Westenhoefer plenty of time to form her plans.

“I want the success,” she says, “but I’m not preparing to give up anything.”