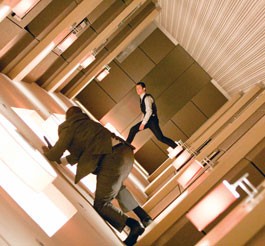 Best escape from escapism and other film file faves

Best Summer Movie Anything that’s free—as in the free outdoor films screened as part of Film Night in the Park, showing variously in San Geronimo (Napoleon Dynamite, June 4), Fairfax (for the ecofest, June 11), Mill Valley (Star Trek, June 18) and so on with different films through the summer. Petaluma’s Lucchesi Park hosts free outdoor movies every Friday starting June 11 with Alvin and the Chipmunks: The Squeakquel.

Best Commando Team Movie This is the summer’s most crowded field, but MacGruber (May 21) beats out May 28’s Sex and the City 2 (an A-Team of patriotic cougars heads to Dubai to swive the Arabs into docility). Or July 9’s Predators (an A-Team of killers vs. crab-faced Aliens). Or July 16’s Inception (more Dream Team than A-Team). Or June 11’s The A-Team (an A-Team movie about the actual A-Team). Or June 4’s Micmacs (an A-Team of dump-dwelling French weirdoes take on a munitions conglomerate, directed by Amelie’s J. P. Jeunet). Or Aug. 13’s The Expendables (Stallone directing Schwarzenegger, Lundgren and Rourke in what could, will and shall be called The AARP Team).

Heck, MacGruber beats them all. Will Forte stars as the world’s toughest action man in the extended red-band film version of the sketch on Saturday Night Live. The choice is fortified by our own desire to watch Kristen Wiig do anything: wash dishes, repair a head gasket—whatever, we’re good.

Most Backlash-Prone Movie In The Twilight Saga: Eclipse (June 30), Bella Swan (Kristin Stewart) waffles over her choice of supernatural beaux. This one is no exception to the rule that the funniest line will always be in the trailer. “I’m going to fight for you—until your heart stops beating” will be quoted and giggled over until Labor Day.

Most Worthwhile RemakeThe Killer Inside Me (June 25). This is another crowded field, beating out June 11’s Karate Kid (with Jackie Chan) and certainly July 2’s The Last Airbender with M. Night Shymalan. Here he is, still remaking movies when he could be healing the sick. And we’ll bypass the English-language remake of Le Diner du Cons, Dinner for Schmucks (July 23), which wasn’t exactly an arcane French movie in the original. So, Killer: a seriously faithful circa-1950s version of the Jim Thompson novel. Casey Affleck as the soft-spoken Texas deputy who everyone takes for a fool until he learns ’em better. Strange feeling, to actually be looking forward to a Michael Winterbottom movie for once.

Best Rejected Advertisement Line For Ramona and Beesus (June 23): “Jesus, it’s Beesus! And Beverly Cleary is as rich as Croesus!”

Best Alternative to Summer Movie BurnoutWinter’s Bone (June 18), a tough, frosty Little Red Riding Hood story in which there’s nothing but wolves. Jennifer Lawrence stars as an Ozark girl in search of her no-good, meth-cooking father, who pawned the family spread in exchange for bail. It’s going to be this summer’s best escape from escapism.

Best Way to Tell the Difference Between ‘Eat Pray Love’ and ‘Predators’ Julia Roberts eats, prays and loves; Predators (July 9) love to eat their prey. The former (Aug. 13) stars Roberts in the film version of authorette Elizabeth Gilbert’s memwah of traveling from Italy to India to Indonesia (yes, the key letter is I). In the latter, a group of savage alien sportsmen hunt the beast called man on a hell planet even worse than earth. We’re counting on our readers to make the mature choice; see you at the alien movie.

Best BafflerInception (July 16). Viewing the Escher-like cities and floating humans, audiences gape at the preview of the new Christopher Nolan film and utter the letters W, T and F in sequence. We have it on the authority of Nolan (per his appearance at WonderCon) that this is merely a heist movie with a bit of futuristic technology included. Leonardo DiCaprio is the head of a team of thieves who crack exceptionally well-guarded vaults: the subconscious of their sleeping victims.

Nolan made a minor movie about a caped vigilante chasing a scar-faced horror clown, but forecasting this film’s take vis-à-vis The Dark Knight is a task for those who enjoy counting other people’s money. No other film this summer should offer such delightful bafflement. Runner up: The Adjustment Bureau (July 30) with Matt Damon, based on a 1954 Philip K. Dick short story concerning interdimensional border troubles.

Teen Weasel A: “That dude from Brokeback Mountain‘s gonna be Prince of Persia [May 28]!”

Best Monster Movie Vincenzo Natali’s outstanding Splice (June 4) mixes the DNA of David Cronenberg’s pervy yet icy Canadian dismay with Guillermo del Toro’s rich paganism. It’s the story of a gene-splicing experiment that probably should have been avoided. Much deadpan fun as the bald creature develops—she’s so advanced for her age, a monster of Aubrey Beardsley-worthy insinuation. Trying to outwit it, Sarah Polley is the most winning embodiment of red-headed geek chick you’ll see this summer. (Not counting Jessie the Yodeling Cowgirl in Toy Story 3, June 18.) Keep an ear open for a throwaway line by Polley that may end the custom of describing business meetings as “a dog and pony show” once and for all.

Best Corporate Fat Cat The now obese Puss in Boots from Shrek Forever After (May 21) gets the nod over the title criminal mastermind in July 30’s Cats and Dogs: The Revenge of Kitty Galore. Should animals star in Bond parodies? Isn’t that what PETA was formed to stop?

Best Movie to See with Mom Tie: Coco Chanel & Igor Stravinsky (June 18) and I Am Love (June 25). The former is the true story of the liaison between the smell-maker and the noise-maker, with Anna Mouglalis and Mads Mikkelsen flaring their nostrils in each other’s general direction. The other, a glamorous Milan drama with Tilda Swinton involved in the ruin of a well-off family.

Most Peaceful Theater The one showing Nanny McPhee Returns (Aug. 20).

Best Moment of Realizing This Summer Was Probably Going to Be Like All Others Watching the preview of Takers when going to see The Losers.