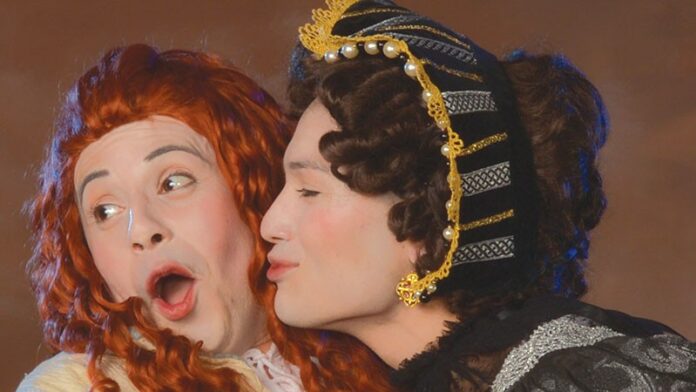 On April 23, William Shakespeare will have been dead for exactly four full centuries.

“This is so exciting!” says Leslie McCauley. The director of Santa Rosa Junior College’s upcoming presentation of Shakespeare’s Twelfth Night admits that her enthusiasm has less to do with 400th anniversary of Shakespeare’s death than with the fact that Twelfth Night will be staged the way its author intended—with a cast of men playing all the roles, including donning corsets and “bum rolls” to play the women.

“It’s sweet revenge,” laughs McCauley, adding that all of the production crew and tech artists on the show are women. “That is how Shakespeare wrote it. With men in the roles, it makes the play make more sense. It pains me to say that, because we do need more female roles for women. But Shakespeare wrote jokes into the play that don’t work as well when women play women.”

McCauley is integrating other Shakespearean elements into the production as well, from chandelier lighting to music played on authentic Elizabethan instruments (ever hear a sackbut?), to the inclusion of traditional “orange girls.”

“Orange girls were women who worked at the theaters selling nuts, oysters and oranges, which were a delicacy,” McCauley says. “Ours will be selling chocolate-covered orange slices. Sadly, we won’t be allowing our audience to relieve themselves in the theater the way they did in Shakespeare’s time.”