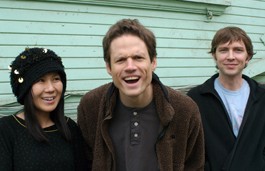 O pening for Radiohead, appearing in Rolling Stone and the New York Times , and performing on Late Night with Carson Daly were never supposed to be in the cards for the massively unconventional band Deerhoof, insists drummer Greg Saunier from his modest Hyde Street residence in San Francisco.

And yet Deerhoof, who perform Feb. 23 at Petaluma’s Phoenix Theater, have been justly lauded around the globe for creating some of the most engagingly original and beautifully off-kilter pop music of the past decade. Their completely unorthodox style is like a hard candy that’s been dropped to the ground and shattered into pieces—a sweet and beautiful thing, randomly disassembled. Most surprising to Saunier is that it’s won hordes of open-minded fans and tickled the ears of those seeking an enjoyably outré take on the pop form.

“It’s always weird to think,” he muses, “that an idea coming from such a personal or remote starting point, somewhere inside somebody’s mind, could ever be heard by a total stranger in Petaluma or Turkey or Japan, and that it’s anything other than total gibberish to them. It shocks me again and again, year after year. Every time we do another album, it’s sort of like, ‘Well, huh. I would never have guessed that that could have been comprehensible to anyone but us!'”

That’s not even mentioning the heralding trumpet blasts, the marching drum cadences, the space-age electronic blips, the Edgar Winter&–like guitar riffs, the dexterous trills, the disco handclaps or the ending’s horn decay, all cut and pasted into three thrilling minutes.

Most bands as creative as Deerhoof inevitably begin losing their edge by evaluating their own eventual legacy, but Saunier stresses that seeing into the distant future has never been the case with Deerhoof.

“Right now,” he says, “I’m so caught up in, like, ‘Why does this one section of our new song not work?’ or ‘God, I think my drum beat in this one part sounds so stupid.’ That’s what keeps me up at night. ‘How far should John’s bass knob be turned up on his amp? Because if he turns it up from two and a half to three, then I think that’s going to ruin my entire life.’

“There’s no way,” he continues, “to plan out what your imagination is going to surprise you with tomorrow.”

This weekend’s show represents two firsts for Deerhoof: the first show with new guitarist Ed Rodriguez, and the first time the band has ever played in Sonoma County. The freshness of both events is in keeping with Deerhoof’s constant rebirth of ideas.

“We’re still complete mysteries to each other in a lot of ways,” he admits. “We don’t understand anything about how you put a song together or how you play music. It feels like nothing’s given; we aren’t starting from a solid base of understanding. It’s just constant upheaval. So, yeah, things are going really well right now.”