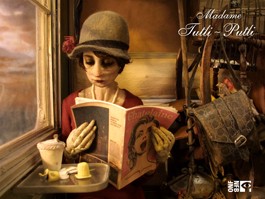 Live action short films are often thought of as “calling cards” for filmmakers, being a snapshot of the film they could make should millions of dollars suddenly rain down upon their heads, Brad Pitt climb onboard and Scott Rudin decide to produce. Several North Bay theaters are screening the contenders in live action and animation in advance of the Feb. 24 festivities, making them calling cards to Academy Award watchers.

Of the nominees in the 2007 selection, the French offering, Mozart of the Pickpockets, is one I’d love to see at full length. Two congenial, bumbling pickpockets off-handedly find themselves suddenly in charge of a homeless deaf boy, taking him home with less thought than one might give an orphaned puppy. They try to teach him to spell, a task neither is capable of, but succeed at teaching him to steal. Mozart has no dark underbelly, the stealing is all jolly good fun that seemingly hurts no one and, while one of the men is obliquely accused of being gay, any apparent homosexuality is held in gentle abeyance. The goofy world that Mozart establishes in which stealing does no harm, taking a remarkably clean and healthy homeless child in without notifying authorities is acceptable and where a single bowl of pasta is a filling meal for three is irresistible.

Also sweetly goofy is the Belgian entry, Tanghi Argentini, following the efforts of an office drone who wants to learn to tango in just two weeks time to impress an Internet date. This schlub enlists the formidable Frans, an accomplished dancer in the office who exhorts him to puff out his chest and slink like a panther, and grudgingly teaches him steps in the conference room after hours. All is not what it seems and an aw-shucks twist at the end nonetheless surprises.

Taken from an Elmore Leonard story, The Tonto Woman is a ’70s-style Western that features a dark man riding into town and verbally seducing the wronged wife of a wealthy rancher. Abducted and held for 11 years by the Apaches, the wife was rescued by her husband but not until she had submitted to a heavy facial tattoo typical of the tribe. Interestingly, she had insisted on a different, more rampant tattoo and is thus even more disfigured&–a bearded lady with a smooth face&–than the ritual demanded. Her husband calls her a “squaw” and keeps her separate, living alone in a shack with a rusty pump for water. The dark man, a cattle rustler, intends to steal the husband’s stock but steals the wife’s heart instead. Things go to a remarkably sappy end in a mere 36 minutes, but the possibilities of this story stay strong.

Also included is a Danish heartbreaker set in an oncology ward (At Night) and a foolish Italian spoof that is probably much funnier to an audience raised on commedia dell’arte (The Substitute).

Animation technology seemingly progresses daily, and the slate poised for the Oscars this year rely heavily on a live-action basis with real actors lurking underneath the fantasy. And these are definitely not your kid’s cartoons; I’d warn against taking anyone under the age of eight. The particularly dark and malevolent Canadian short Madame Tutli-Putli is a short essay on the evils of travel with no real plot and even less resolve. It’s horribly fascinating to watch, however, and the scabrous flesh of its characters and dark insistence of its action still give me the creeps.

On the lighter side is the French submission Even Pigeons Go to Heaven, in which a charlatan marketing mechanical trips to heaven is one-upped by the Grim Reaper himself. The Russian watercolor fever dream My Love ostensibly follows the shallow yearnings of a young man’s lust but really recounts the great Russian literature of the late 19th century with a surprisingly sharp longing for the Czarist culture so long gone, while the U.K./Polish reworking of Peter and the Wolf finds a dystopia of lame birds and dead bears that even Grandpa’s gate can’t keep out.

The final work on the program is the five-minute I Met the Walrus, using reel-to-reel audio footage recorded by 14-year-old Jerry Levin when he sneaked into John Lennon’s hotel room in 1969. The animation refers to the Monty Python&–esque clip-art tomfoolery of the era, an inky sprawl that pools and reinvents itself endlessly. Lennon, too sharp to be dumbed down by media lessons of the past, assures the boy, “We’re all Christ on the inside.”