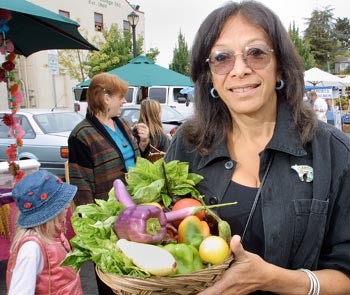 IMAGINE some not-too-distant future in which American agriculture is vibrant and profitable, and it’s thriving without abandoning environmental and social responsibility and ethics. Imagine how this would translate into a myriad of small farms at which growers are happily serving the consumer, responsive to customers’ needs, and producing flavorful, healthy, locally grown food without toxic chemicals. And imagine consumers who are demanding good food and totally supporting these farmers.

This is sustainable agriculture.

A dream? Maybe, in these times of corporate agriculture, with its rapaciousness and industrial-strength doses of chemicals, fertilizers, pesticides, and preservatives. But not too farfetched, say the supporters of the concept, who are presenting two forums on sustainable agriculture on Aug. 21 and 22 in Sonoma and Napa counties.

“The idea is to bring the processor, the producer, and the consumer together in common cause,” says forum organizer Ann Maurice, a Sebastopol activist who founded the Ad Hoc Committee for Clean Water 15 years ago and remains committed to supporting local environmental issues.

Maurice is bringing in keynote speaker Dr. John Ikerd, professor emeritus of agricultural economics at the University of Missouri, who grew up on a dairy farm and runs a sustainable-agriculture program for the state of Missouri.

“I call sustainable agriculture common-sense agriculture,” replies Ikerd when asked to define a term that often gets lost among such other buzzwords as organic and permaculture. “Economic viability is necessary, but it’s not enough to sustain agriculture over the long run–it goes beyond profits,” Ikerd continues. “It must be socially responsible and provide people with opportunities to be productive and be ecologically sound enough to sustain productivity in the future.”

Ikerd adds that sustainable agriculture is a long-term concept and an idea that’s gaining momentum across society, into such related possibilities as sustainable communities, sustainable fisheries, and sustainable forestry. “People are thinking beyond short-run self-interest and are looking at the broader interest of society in the long term,” he adds. “Consumers are making choices as to how land and people are to be treated and learning that anything that is degrading to society as a whole is not sustainable.”

THERE’S DEFINITELY a certain attitude involved with the concept of sustainable ag–just buying or growing organic produce doesn’t cut it, according to Maurice. “It’s not good just because it’s organic, because people can be hostile in their pursuit of organic,” she claims. “The idea here is that it includes sustaining the farmer. There’s no point in proselytizing about organic if the farmers are out of business and our food is being imported from Mexico and China.”

But, she adds, the increasing popularity of organic produce is helping some of the concepts of sustainable agriculture to sink in. “Organic used to be kind of a ‘radical’ concept associated with a ‘hippie’ fringe, and it’s taken some years but the concept is becoming increasingly mainstream,” she explains. “Americans are tired of produce that doesn’t taste good; tomatoes that have no flavor, fruit that looks like it came out of a photograph from Gourmet magazine but has no aroma or flavor. People are demanding more flavorful, more nutritious produce.”

Maurice touts Petaluma-based dairy Clover-Stornetta Farms as exemplifying the principles of sustainable agriculture. “In response to consumer demand, Clover-Stornetta was one of the first to produce milk free of the artificial bovine growth hormone, and they’ve developed a loyal customer base, and now they even put out an organic line,” she explains. The dairy also brings in individuals who are following a San Francisco drug rehabilitation program into Sonoma County to work in the dairy at St. Anthony’s Farm, a rehabilitation facility just outside Petaluma. “This is a perfect example of bringing together social, environmental, and ethical responsibility,” she says.

There’s a growing movement to promote the principles of sustainable agriculture, but at the same time some wine-grape growers have co-opted the term while implementing practices that fly in the face of the basic concept. Even those growers who have hacked down vintage oaks, ripped out other crops (such as apple trees), planted vineyards on steep hillsides that cause erosion and degradation of streams, or upped their use of pesticides have laid claims to being practitioners of sustainable agriculture.

Indeed, it’s not uncommon for some of the most irresponsible grape growers in the North Bay to portray themselves as stewards of the land and belonging to an environment-friendly industry.

Yet some local grape growers are following the sustainable-ag creed. “We have some excellent organic wines produced here, but they are the minority, though it is growing,” says Maurice, citing Forestville’s Russian River Vineyards and Hopland’s Fetzer (Bonterra brand) as examples. “Even Kendall-Jackson, even Kendall-Jackson, decided to no longer use methyl bromide on any of their acreage. But we want all of these producers, including the corporate moguls, to be responding to educated consumers who are sick of the overapplication of toxic chemicals.”

THE TWO FORUMS come at a time when growers, environmentalists, and county officials (at least in Sonoma County) are cooperating more than ever; the Sonoma County Board of Supervisors last week signed a broad-based agreement to end forced pesticide spraying of the vineyard pest the glassy-winged sharpshooter. However, Maurice says resistance to the concept of sustainable agriculture is great.

The biggest challenge to the movement, she says, is greed. “If you’re in pursuit of money as your bottom line, we’ve got a problem because that’s what causes degradation of the environment and ethical irresponsibility.”

American agriculture, she adds, is under siege by bad international trade deals. “In exchange for our intellectual property exports, foreign agricultural produce is being dumped in this country,” she avers. “For example, in local supermarkets we have Chinese dried apples–how is it possible for these to be shipped here that great distance when they can be produced across the street from the market? A certain amount of exotic imported produce is one thing, but people need to seriously support local agriculture.”

While there are no specific plans to label locally produced sustainable-ag products or to accredit facilities producing food this way, Maurice suggests consumers demand a “locally produced” section in their supermarket and learn about what’s in season. “People have been so alienated from agriculture we don’t even know what’s in season anymore,” she says. “People aren’t aware fruit has been in storage or been flown in from somewhere else and the hold of the airplane has been sprayed with fumigants.”

Maurice also suggests that interested individuals seek more information at farmers’ markets and natural food supermarkets. There is evidence that the movement is growing: A group in Sebastopol has recently created “Sustainable Sebastopol” and is touting Maurice’s upcoming forums.

Maurice hopes the forums will further increase consumer awareness. With a free five-hour program that includes food, live music, a demonstration of a bio-diesel Jetta that is partially fueled by soybean oil, and insect-controlling tame bats up close, the events promise to take any potential dryness out of the topic.

“I want people to be motivated, not to just sit there and clap and go home, but to actually see how we can apply this locally,” says Maurice. “The people need to lead, and the politicians will follow. That’s how I believe real social change happens.”

The Ad Hoc Committee for Clean Water, the city of Santa Rosa, Clover-Stornetta Farms, and Whole Foods Markets present a forum on sustainable agriculture with various guest speakers and demonstrations, Tuesday, Aug. 21, from 4 to 9 p.m. at Finley Center at Stony Point Road and West College Avenue, Santa Rosa. The forum also will be presented Wednesday, Aug. 22, from 6 to 9 p.m. at the Napa Masonic Hall, 4125 Solano Ave. Admission is free. 707/874-3855.