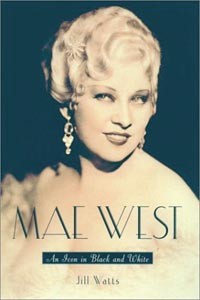 BEFORE there was Madonna, before there was Angelina Jolie, there was Mae West. Indeed, without West, the first two might not be where they are today.

A working-class girl who went from burlesque dancer to Hollywood’s top box-office draw in such movies as I’m No Angel, West used her bold sexuality like a pair of pliers, tweaking the prim little nose of America’s prudish establishment so hard that she once went to jail for obscenity. “When I’m good, I’m very good,” went her most famous line, “but when I’m bad, I’m better.”

West had plenty of sex appeal. But don’t confuse her with baby-doll sex objects like Marilyn Monroe. There was far more to West’s persona than, as The Chicago Daily Tribune once put it, “hips, hips, hurrah.” What really rocketed West to stardom (and made her a perennial target for social conservatives) was her sly subversion on stage and screen of the rigid rules of behavior laid down for white women in early-20th-century America.

Or so argues California State University history professor Jill Watts. In her new biography, Mae West: An Icon in Black and White (Oxford University Press; $35), Watts puts West’s life under a scholarly microscope and examines “the major themes that long dominated her work: critiques of the dominant culture’s assumptions about class, gender, and race.”

Watts makes a persuasive case that West was, essentially, a talented mimic who appropriated African-American cultural forms to satirize and subvert sexism and racism. Borrowing from the likes of vaudeville performer Bert Williams and female blues singers, West put together a provocative persona that entertained the masses and scared the crap out of way-too-decent types everywhere.

Like Elvis Presley after her, West made her fame and fortune from this cultural appropriation. But unlike Presley, Watts argues, West acknowledged her debt to black culture and generally supported–in her art and in real life–the struggle for civil rights.

There’s even some cause to believe that West may have been racially mixed herself. Some confused critics have taken issue with Watts for overstating the evidence for this. But in fact, the author is careful to indicate that one of West’s grandparents may or may not have been a light-skinned black passing for white.

There are weaknesses in Watts’ work. She is certainly no master stylist. While better than that of 90 percent of academic authors, her prose ranges from serviceable to tedious to torturously convoluted. The first chapter, which describes West’s family life in turn-of-the-century Brooklyn, is especially slow, but the narrative picks up speed.

Of course, the author has great material to work with–West’s colorful, incredibly dramatic life, from her strange childhood growing up in a family connected to New York’s criminal underworld to a late-in-life appearance on Mister Ed.

Some of the funniest passages in the book describe West’s wrangles with the Hollywood censorship office over risqué scenes in I’m No Angel. Paramount tried to dodge the censor, a man named Will Hayes, by submitting incomplete scripts.

Watts describes what happened next: “But the Hayes office held its ground. Receiving only the title to a song called “No One Does It Like That Dallas Man,” it immediately declared the number unacceptable. The studio appealed and sent lyrics. Discovering such lines as “He’s a wild horse trainer, with a special whip; gals, you’ll go insaner,” the censors refused to reconsider. Studio executives persisted, claiming that all “the Dallas man does is kiss, hug the ladies, and ride a horse.”

West lost that battle. But, as Madonna can attest, she won the war. There’s no question that, by the time she died at the age of 87 in 1980, she’d helped make America a rather different place.