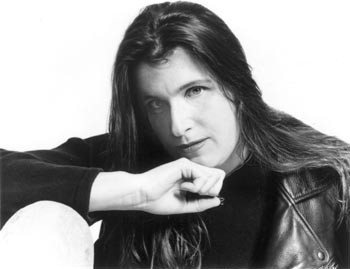 Bad attitude: Sexpert Susie Bright gets down and dirty with her wildly eclectic Best American Erotica 1999.

THIS TIME OF YEAR I get inundated with these books about how to be a hot babe in bed,” says Susie Bright, voice dripping with amused contempt. “I’ve got this thing; it’s so funny. It’s a beautifully packaged box that claims to have everything you need in it, from stories to playthings. In fact, I’m going to open it up while I talk to you. I just can’t wait to see this junk.”

With that, the noted author and sexpert, on the phone from her home in Santa Cruz, begins enthusiastically ripping into one of the many offerings of erotica filling up bookstore shelves in time for Valentine’s Day. It’s quickly apparent that this particular item is not up to Bright’s standards. The candle is “cheesy,” the feather “looks like a pigeon dropped it outside,” the scented body oil is “really stinky.” Even the silken cord–included as a naughty nod to light bondage–doesn’t pass muster.

“These things are almost designed to make you fail,” she says. “You know what this silken cord is? It’s like one of those things you tie curtains back with. It’s a drapery accessory. One of these days, I’d like to do a documentary where I take people into an average hardware store and show them how you can get really high-quality S&M equipment for cheaper than anything you can find in a sex-toy shop.”

Bright, who speaks Feb. 23 in Sebastopol, does have a certain amount of self-interest at stake here. The series she edits–The Best American Erotica–is also out on those crowded shelves, fighting for visibility.

The irony is that this explosion of New Wave erotica, much of it written by and for women, might not exist if it weren’t for the work Bright did as a pioneer in the field. The Herotica series she began editing in the late ’80s blazed a trail that has since become a six-lane interstate. Not that Bright is really complaining–she’s pleased as punch that sexy stories have gone mainstream. And she’s not worried about the fate of The Best American Erotica 1999 (Simon & Schuster; $13).

“I have no shame about my book, because my book is not cheesy,” she says with a laugh. “It is not insinuating that if you follow these instructions or techniques that something’s going to happen. I’ve become very anti-technique over the years. I finally realized that the people who are the hottest in bed were hot because they just got so turned on and let their body go with what was motivating them.”

Sex in all its wild variety has long been the focus of Bright’s attention. Of course, that’s true of many of us, but the woman the press has dubbed America’s premiere “X-rated intellectual” has been on a crusade since she was a teenager, fighting with an evangelistic fervor against what she views as puritanism, intolerance, and hypocrisy.

She edited the audacious lesbian magazine On Our Backs and toured the country with her presentation How to Read a Dirty Movie, but she is best known as a provocative writer. Her 1997 bestseller, The Sexual State of the Union, was a withering attack on a rouge’s gallery of anti-pleasure villains, taking on both the “homophobic right wing” and the “sexaphobic left wing.”

Bright has made a career out of defying labels and reconciling apparent contradictions: She’s a pro-porn feminist and a lesbian who sleeps with men, among other things. Above all, she’s committed to frank discussion of human sexuality–which can make her a bit disconcerting to talk to.

In fact, Bright is chock full of advice about how to spend the most romantic (and, for some, the most anxious) holiday of the year, even if you’re spending it alone.

“Why should single people give love up to the yuppies in the hot-air balloon with the champagne flutes?” Bright says. “Maybe you want to get into celebrating the platonic love in your life. Or, like I told one friend of mine who was crying in her soup about being dumped, ‘You’ve always said you wanted to have all these sexual adventures that you couldn’t have when you were with what’s-his-name. Now’s your chance.’ “

Or you could just curl up with a good collection of erotica. But that begs the question of where you find the really good stuff, a problem Bright confronts every year when she pulls together Best American Erotica, which she has edited since its inception in 1993.

“In some ways, as a certain style of stroke book, it’s a failure,” Bright says with a laugh. “I mean, I know what my little favorite turn-ons are, and I can go and pick up those plain brown wrappers and turn to my favorite section and Jill off. I know exactly what will press the button every time. But for sustained reading, you need something that gets to you on emotional, intellectual, soulful levels.”

The new book’s 21 eclectic tales offer a bit of everything. There is Anne Tourney giving tips on “How to Come on a Bus.” There is a frustrated Robin superheroically lusting after a deeply repressed Batman. There is gay sex, straight sex, Internet sex, men getting spanked for having Internet sex, first-time sex, sex with razors, and more.

“It’s a bit like travel writing,” Bright says. “You don’t write stories about the beauty and wonder of Hawaii or India just for people who’ve already been there and love it. It’s to let people feel like they’re the armchair traveler, that they get to go to all these places without actually having to do anything and feel some of the thrill, feel the attraction, feel the sympathy.”

In this era of Oval Office trysts, you might think that real life offers erotica some pretty stiff competition. But at the mention of Ken Starr’s infamous tome, Bright merely sniffs in disdain.

“The Meese report was much more sexy,” she says. “One of my favorite sayings was that I masturbated to the Meese report until I passed out. They used real pornography to make their case. They quoted things liberally. But the Starr report was trying to be original, and it stinks..”

So, what’s next for the one-woman sexual revolution? Bright, now 40, admits she’s uneasy about being an aging sexpert in a culture obsessed with youth. But a recent weekend with a group of older nudists reassured her.

“When they had their clothes on, they looked like a bunch of old biddies. When they took them off, it was like, ‘Wow, you’re good looking!’ ” she says with a laugh. “In another 30 years, I’m probably going to be a full-time nudist.”