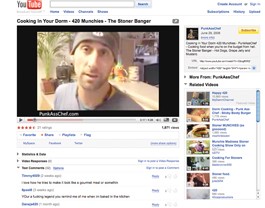 Preparing your student for college entails so many handy lists just waiting to be crossed off, everything so tidy and organized that even the weepiest mother can wave goodbye through mascara-soaked lids knowing that her beloved has the requisite amount of shower shoes, extra-long sheets, antifungal cream and other glories of young adulthood. She can feel smugly confident that her progeny will thrive because most colleges require dorm dwellers to buy into that mythic feedbag, the Dining Plan.

What Mom doesn’t yet know is that her student will rarely make it to the dining hall. He’ll sleep through breakfast, she’ll forget lunch and no one remembers dinner until 11pm. Instead of the fresh salads and Korean food made-to-order that the dining hall might provide, her scholar is mostly eating ramen, bagels and other wheat products ably gummed by babies.

Of course, the 21st-century student can turn to YouTube to learn more about eating in the dorm room, which is evidently never done sober and which is where “Punk Ass Chef” comes ambling in. In four short minutes, PAC will show your student how to make a “stoner banger” by spearing a hotdog and resting it on an open gas flame while quickly mixing up a “sauce” from yellow mustard and jam. Take a handful of those stale potato chips inevitably nearby, smash them and pour the sauce and charred dog on top, naturally prompting the question, just how stoned do you have to be?

Jelly is a trope for PAC, his “sticky booty burger” featuring ground beef, peanut butter and the miracle of pectin-addled fruit. Don’t forget to add garlic powder and salt. PAC fan FeedRosie reports, “I made this for lunch today before class. At first I thought that this would be awful, but it was actually pretty fuckin’ delicious. The garlic and the salt were real important.”

Real important. Weepy moms may want to stay away from YouTube entirely, preferring not to know the plethora of stoner cooking how-to’s bursting from its unstemmed sides. “Cooking for Stoners” begins with cinnamon Pop-Tarts and adds peanut butter, Nutella, chocolate syrup and a final dollop of peanut butter ice cream in case the lowly legume has been underrepresented. “Just smear it all on,” our teen chef slowly advises. “It doesn’t have to look good. It’s gonna taste good, I promise.” Shudder.

“Stoner Food” demonstrates the “french fry pancake,” in which french fries are simply dumped onto a plate and covered in syrup. “Seasoned 2 Stoned” rifles his buddy’s cabinets to produce an appetizer of graham crackers slathered with cream cheese, Nutella—Nutella! who knew?—peanut butter and jelly. “Basically,” he opines, looking unsteadily at the camera, “if you don’t know how to spread shit you like on a graham cracker, you’re too dumb to be in school.”

Take that advice as a mantra, Mom. Look forward to winter break and just turn off that ‘Tube.