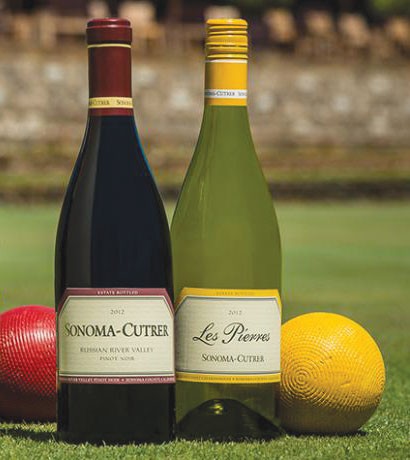 Sonoma-Cutrer invites you to get on their lawn

Plunk! The sound of mallet connecting with ball punctuates the quiet on the green at Sonoma-Cutrer. Plunk, crack! One hard plastic ball knocks against another. The wind whispers in distant trees. And then: “Hey, where’s my wine glass?”

The best summertime sports combine drinking with participation instead of spectating, don’t they? If we add the caveat, “in a safe and sane manner,” we’re pretty much left with golf and croquet. Drilling down further with the provisos that it be fun, not boring; fun for mixed groups of people of any skill level; and not wasteful of prime Russian River Valley turf that could be growing great grapes for the thirst-slaking wines we could be drinking while engaging in sport—remember the drinking part?—we’re glad that Sonoma-Cutrer went with croquet.

Sonoma-Cutrer built the courts back in 1985. Inset below stone terraces, it’s much more than just a very flat lawn. From 1986 to 2002, the winery hosted the World Croquet Federation championship here, and still puts on a charity tournament each spring. A recent event left spotty scuffing in the middle of the court—evidence that the spongy mat of impossibly short grass is the real deal, anyway. And it’s the ideal surface on which to leave your wine glass while you make a play. A nonshattering Govino plastic glass is included with each croquet winetasting for the democratic price of $15.

As Sonoma-Cutrer’s hospitality manager, Mark Elcombe takes the game seriously. Breaking up a large group into two-person teams, he plans for us a long afternoon of matches and playoffs, followed by a grand championship. If he hadn’t reminded us of the rules of this simplified six-wicket game, we’d have been there till nightfall. That’s just the idea in September, when “full moon croquet” features little lights on each wicket. Elcombe says he floats a giant moon globe above the course in the event of fog.

It’s that famous fog that’s helped make Sonoma-Cutrer Chardonnay a top choice among restaurant-goers, year after year. The founders fooled around with Cabernet before settling on Chardonnay in 1981, just in time for America to discover its love for buttered apple pie in a bottle. Hitting the sweet spot, the 2014 Sonoma Coast Chardonnay ($23) is a quality rendition of exactly that. Later in the game came Pinot, with the 2002 vintage. I wanted to savor the firm, cranberry and cherry flavors of the woodsy-scented 2014 Russian River Valley Pinot Noir ($34) a little longer—but where’d I leave that wine glass?