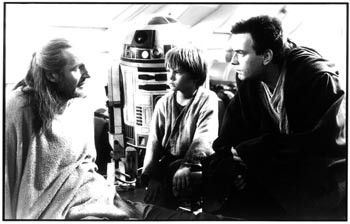 ‘The Phantom Menace’ will both please and disappoint ‘Star Wars’ fans

THERE IS a great disturbance in the Force. Yesterday one of my daughter’s preteen companions overheard my mention of Star Wars: Episode 1–The Phantom Menace. Contorting her bright, multifreckled face, Amy–at 12 years a pure representative of Star Wars’ main demographic target audience–casually dissed the as-yet-unseen film. “Oh, that,” she knowingly remarked. “I hear it’s not too good.”

Clearly, Amy has heard about the critical drubbing that George Lucas’ space-opera prequel has been receiving in advance of its release. The movie has been called “flat, “lifeless,” “dreary,” and “redundant.” (So far in advance, in fact–reviews are traditionally held to the day of a film’s release–that Lucas, provoked to fits of uncharacteristic pique, has attacked such early warnings, stopping just short of calling the media “a wretched hive of scum and villainy.”)

Surely, for a film so highly anticipated–and recklessly hyped–a certain amount of backlash is to be expected. And unforgiving critics, sorry to say, do seem to gleefully wield their sharpest knives when reviewing the big, commercial “event films.” However, a film is usually in release a few weeks before its own audience starts knocking it; The Phantom Menace won’t officially open for another whole week. Perhaps the unprecedented Star-hype has grown so enormous that it’s now caving in on itself, like a big black hole.

But as Lucas has somewhat disingenuously repeated of late, “It’s only a movie.” And he’s right. In the end, Menace should be judged, not as part of a cultural phenomenon, but as a piece of fluffy, popcorn-chomping entertainment.

So then, how good is The Phantom Menace?

No, it’s not as good as the original Star Wars. Yes, it is flawed: The human characters are decidedly less charming and engaging than were Luke and Leia and Han Solo, and the alien characters–especially the nearly unintelligible, pratfalling Jar Jar Binks–are frequently annoying and disruptive of the action. Furthermore, the plot is disjointed and confusing, and the actors seldom appear to be having any fun (and wasn’t part of Star Wars’ charm that Mark Hamill, Carrie Fisher, and Harrison Ford all seemed to be having a great time?). Worst of all, the mythic elements of the Star Wars world–including an odd, microbiological explanation of the all-powerful Force, that makes it seem less like cool, Zen-esque spirituality and more like a parasitic disease–are hard to warm up to and frequently kind of murky. Does the mother of boyish Anakin Skywalker (the future Darth Vader) really say that her son is the product of a virgin birth? Or was she just being coy and poetic?

That said, the film remains a thoroughly enjoyable diversion, on a par with Jurassic Park and Twister: a little thin in the character department, but unmistakably cool for its unique vision and eye-popping special effects. The story deals mainly with the political machinations that will lead to the Empire’s domination of the Republic, and the discovery of Anakin’s potential future as a Jedi. The beloved droids C3PO and R2-D2 are involved in the action, and there are a few unexpected revelations and even some nifty major plot twists.

IF THAT’S NOT enough to justify the price of admission, the movie features numerous moments of true visual greatness, and a couple of standout sequences that rank among the best action scenes ever filmed.

In fact, I’ll say it right now, The Phantom Menace may be the best animated film since Toy Story.

And that brings us to the one thing that is most problematic, but also the most exciting, about this film: the overwhelming use of truly amazing computer animation. Whether in showing Obi Wan Kenobi (a dead-serious Ewan McGregor) and Jedi master Qui-Gon Jinn (Liam Neeson) believably interacting with fully animated characters like Jar-Jar and a grotesque flying junk-beetle named Watto, or in fully animated battle scenes with amphibious Gungan warriors facing off against legions of deadly “battle droids,” the computer effects are the star of the show. Some critics have made this their primary criticism of the film, decrying the sublimation of human character that seems to promote Lucas’ driving technical agenda.

But as I recall it, Star Wars has always been about its special effects. The first time I saw the first movie in a noisy theater in Downey, Calif., the audience responded by giving the special-effects credits a standing ovation. That night, I went home and dreamed of Jedi knights, light sabers, and magical cities in the stars. I woke up with a new sense of wonder at what could be achieved on the big silver screen.

So yes, as a Star Wars fan, I’m disappointed that the new installment isn’t the best film ever made, and as a critic, I’m bothered that more attention wasn’t given to the human characters that allow an audience to enter a film’s world. But as a believer in the limitless potential of film, I’m cautiously hopeful, truly looking forward to the marvels that remain to be seen.

One more thing. Last night, I dreamed about light sabers.