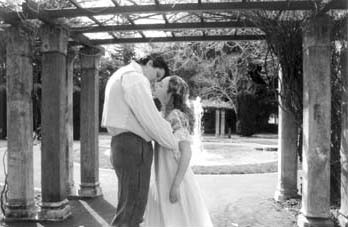 WHEN ENGLISH math-guru Andrew Wiles proved Fermat’s Last Theorem correct, he tearfully intoned, “I will never do anything as significant again.” For shame, Mr. Wiles: If playwright Tom Stoppard had taken that same attitude following his classic Rosencrantz and Guildenstern Are Dead, we wouldn’t have his brilliant Arcadia, partly inspired by Fermat’s daunting equation and currently playing at Actors’ Theatre.

All this occurs against a backdrop incorporating chaos theory, the Enlightenment, romanticism, poetry, landscape gardening, and sex, “the attraction which Newton left out.” Stoppard’s hallmark wit and verbal pyrotechnics abound, and under Sherri Lee Miller’s capable direction misfires are kept to a minimum.

Bryson turns in a worthy portrayal of rakish tutor Septimus with his nuanced performance. The actor conveys his character’s intellectual and emotional revelations with a subtlety that allows the audience to come to the same delightful discoveries in tandem with the character.

Likewise, young Miller’s compelling Thomasina provides many of this production’s brighter moments. The actress brings to the stage an unflagging effervescence that never turns frothy.

Cameron McVeigh’s hammy approach to Valentine, the cagey modern scientist whose romantic designs on spitfire scholar Hannah are undone by his own nebbishy behavior, delivers many comic highlights.

That said, however, the production harbors a minor propensity for lulls, not many and never ruinous, but present nevertheless. This is owing, in part, to the denseness of Stoppard’s verbiage and the perceptible fatigue it brings upon the performers, who often have to slog through reams of scientific exposition that are only occasionally offset by Stoppard’s merciful wit.

Tackling this problem head-on, director Miller activates her secret weapon: J. Eric Cook’s hilariously revved-up portrayal of bombastic literary sleuth Nightingale. On the page, the character seems little more than an irksome foil to Hannah’s mannered machinations, but in Cook’s capable hands, Nightingale is a combustible show-stealing schmuck you love to hate and hate to love.

Cook’s performance is so impeccable, it threatens to send the whole production off kilter, as audiences may prefer to stay in the “present” with this boisterous egomaniac rather than return to the more subtlety drawn characters back in the 19th century.

Despite its unevenness, Arcadia is ultimately a joy to watch and boasts enough laugh-out-loud moments and poignant tête-à-tête to recommend itself. It’s a must-see for Stoppard fans.