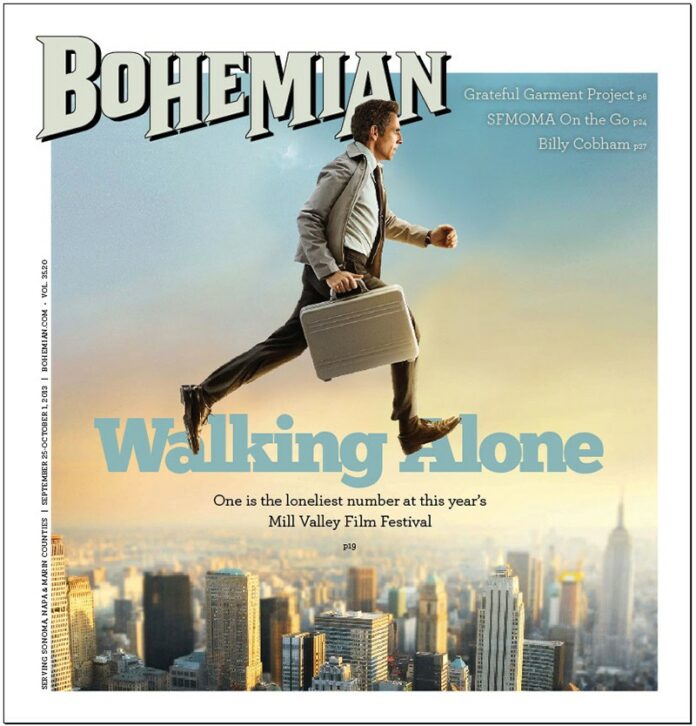 That’s what poor, daydreaming Walter Mitty says to the imaginary sergeant who’s just informed him that “young Raleigh” is not fit to fly a bombing mission on a nearby enemy ammunition dump.

Movie fans don’t yet know if that line, from James Thurber’s ingenious 1939 short story “The Secret Life of Walter Mitty,” will appear in the big-budget movie version starring and directed by Ben Stiller. But when the film closes out the 36th annual Mill Valley Film Festival, one thing is certain: the epic tale of a sad man who lives his life alone in his own head will hardly be alone. In fact, this year’s festival is packed with films about solitary heroes, solo journeys, isolated communities and lonely people of all kinds.

“That wasn’t intentional, of course,” laughs Zoë Elton, longtime programmer of the Mill Valley Film Festival, running Oct. 3–13 at various locations from Mill Valley to San Rafael. “These kinds of connections, these unexpected repeating themes—they often start bubbling up into our consciousness as the festival program evolves: ‘Oh, look at that!’ There are a lot of films about isolation and aloneness, whether they are alone inside of a larger community or all alone on a sinking boat.”

The sinking boat is literal in writer-director J. C. Chandor’s All Is Lost (Oct. 12, 3:30pm, and Oct. 13, 8:15pm). Robert Redford is seriously alone, in the middle of the Indian Ocean, without another living soul—or actor—in sight. In a skilled display of his virtuosity, Redford plays a sailor whose tiny sailboat is sinking fast after a collision with a stray piece of floating debris.

Desperate to fix the damage before it’s too late, Redford—with scarcely a word spoken aloud—goes through all the stages of fear, anger and last-minute problem solving in a film that stands as a tribute to the resourcefulness of solitary heroes.

A different kind of solo survivor takes the spotlight in Capital (Oct. 4, 6:30pm), a multilingual thriller from legendary Greek director Costa-Gavras, who will be honored in a special onstage tribute after the film. Costarring Gabrielle Byrne as an unscrupulous American investor, the film follows a gleefully greedy but untested bank CEO (Gad Elmaleh) as he discovers he’s been set up to fail as the patsy in a major bank-industry power play.

“I think it’s a Zeitgeist thing,” observes Elton. “I was speaking with director Steve McQueen about this, the way that certain events in the world give rise to art that takes a look at our condition. There are a number of films out in theaters now that deal with the subject of race, and perhaps that’s part of our examining ourselves after finally electing an African-American president.”

One extremely high-profile film, dealing deals with race and the issues of solitary survival, is British director McQueen’s critically acclaimed 12 Years a Slave, which recently took the top prize at the Toronto International Film Festival, the winner of which often goes on to win the Oscar for Best Picture. Based on the horrific but lyrical memoir of Solomon Northup, an accomplished violinist in New York City who was kidnapped and sold into slavery in Louisiana in 1841,
12 Years a Slave (Oct. 11, 6:30pm) shows a man (Chiwetel Ejiofor of Kinky Boots) prized for his intellect, who now finds intellect no match for the brutal reality of slavery.

“It’s that solo theme, certainly,” notes Elton. “There is something powerful about the power of the individual and what they embody when pitted against impossible odds. What I’m also noticing is that in several films, we are seeing people dealing with the most aberrant aspects of what human beings can do to one another.”

A number of this year’s most buzzed-about films take place in Germany during the start of WWII, beginning with the opening-night film The Book Thief (Oct. 3, 7pm), about a young girl (Sophie Nélisse) who frequently finds herself alone amid nightmarish realities, and steals books as a way of asserting her own identity. The film features a major performance by Geoffrey Rush, who will be honored in-person on opening night with a special award.

Similarly, the multi-part Generation War (full program, Oct. 6, 5pm; parts 1–3, Oct. 7, 8 and 9, respectively, 12:30pm each day) originally made for German television, looks at isolation in a time of crisis as five friends in 1941 go off to war, each taking his or her own solitary path, with tragic and emotionally powerful consequences.

Then there’s Rithy Panh’s extraordinary Missing Picture (Oct. 12, 4:45pm, and Oct. 14, 5:30pm), in which the ingenious Cambodian filmmaker illustrates how he survived during the Pol Pot regime—telling the story through carved wooden figurines.

“With all of these films,” says Elton, “the compassionate view of the filmmaker is the thing that makes us deeply connect with those people onscreen, people who are forced to stand alone against impossible odds. That’s the difference between great filmmaking and poor filmmaking—the ability to engage the heart and the head, to connect us intimately to people who are outside our normal experience and to find those little similarities.

“In the end, of course, everyone can identify with being alone,” Elton adds. “The best films make us realize that, in an odd way, we aren’t alone in being alone at all.”

Can the goofball from Meet the Fockers, Zoolander, Tropic Thunder, Dodgeball and Something About Mary succeed in a serious role? Screening is The Secret Life of Walter Mitty.

The one all the teenage girls will be at due to Leto’s frontman status in the band 30 Seconds to Mars; expect Gen X-ers who loved My So-Called Life shouting out “Jordan!” as well. Screening is Dallas Buyers Club.

Beware, attendees of Fanning’s spotlight! As
Jane Volturi in the Twilight series, she can cause intense pain in others with her mind. Screening
is Effie Gray.

Rush’s depiction of David Helfgott in Shine, which screened at the 1996 MVFF, earned a commemorative postage stamp in his homeland of Australia. Screening Thursday, Oct. 3, 7pm, Century Cinema in Corte Madera is The Book Thief; on Saturday, Oct. 5, 9:15pm, Rafael Film Center, Rush appears again for a tribute.

We imagine the actor from the 1970s version of
The Great Gatsby will have something to say about this year’s remake. (As for us, we’re asking him about Smile, filmed in Santa Rosa.) SNL alum Will Forte also appears in person. Screening is Nebraska.

Forensics nerds unite! Sarah Sidle from CSI—our favorite—stops by to promote a film about animal abuse in Bulgaria. Screening is Lion Ark.