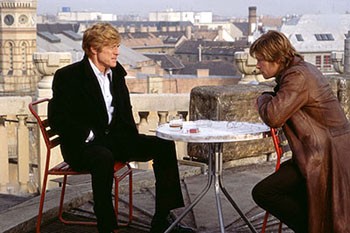 Listless ‘Spy Game’ is all over the map

Brad Pitt, as agent Tom Bishop, awaits death in a Chinese prison. He’ll die at exactly 8 a.m. at the hands of the punctual savages, unless his former CIA control, Nathan Muir (Robert Redford) can engineer a heroic plan to bust him out. And Muir himself only has 24 hours until retirement.

So Pitt’s in the jug, being knocked around by evil Maoists; Redford’s stuck at a table, being faced down in all-day debriefings. A little smile plays on Muir’s face as he endures impertinent questions thrown at him by a team of character actors, hand-picked for homeliness to make the weather-beaten-beyond-recognition Redford look boyish again.

In Spy Game, you have a recipe for a stalemated movie, despite any delusions of action the commercials might give. All the spying is in the flashbacks.

There are three episodes in the script by Michael Frost Becker (Cutthroat Island) and David Arata. We revisit the leads first as fellow warriors in Vietnam, right before its fall; later, we join them in Berlin during the Cold War. Last, they team up in Beirut during the worst of the fighting. In these three locales we witness the recruiting, the training, and finally, the betrayal of the young agent by the older professional.

The Beirut segment is of most interest, thanks to the location, though the Berlin sequence has Charlotte Rampling, who turns up unbilled in a too-brief bit as a lady spy. In Beirut, Pitt recruits an “asset”–a female humanitarian aid worker at a refugee camp. The soon-to-be-used woman is Catherine McCormack as Elizabeth, a Londoner with an unlikely backstory. You can call a certain kind of beauty “remote”; to judge by McCormack’s acting, she’s practically in Tierra del Fuego.

Redford’s Muir urges Pitt’s Bishop to seduce her more quickly: “twice the sex and half the foreplay,” he orders. No doubt this is a personal motto for director Tony Scott, one of the 1980s’ most elephantine hard-chargers (Top Gun, Days of Thunder, etc.). All the tricks in the bag are used here: filters, swooping camera work, helicopter worship, pixilated fast-forward and zooming–more gingerbread than a bakery. Occasionally, the film stops dead in its tracks in freeze-frame to remind us that we’re still on the clock (“2:10 p.m.”). It’s a service to anyone doubting that the movie will end eventually.

Spy Game is meant to be of the school of LeCarre. The soundtrack is loaded up with honorable schoolboys keening baroque music in a choir. Photographer Daniel Mindel does his best to coat it all in “realistic” oily, gray light.

Still, LeCarre’s work is scrupulous about history and politics. By contrast, check one sample line in Spy Game: “Hanoi had just fallen,” says a reminiscing Muir, mistaking it for Saigon in 1975. We visit a Lebanese-Palestinian refugee camp, chock-full of bloody amputees, but there’s no sense of who they are or what might have chased them there (vampires? masked wrestlers?).

Mostly, we see that the business of being CIA means mixing it up with cowardly, unreliable foreigners–some of whom selfishly put their open-air fish market right where Brad was trying to drive his car. You could get a clearer picture of the world of espionage from Harriet the Spy.