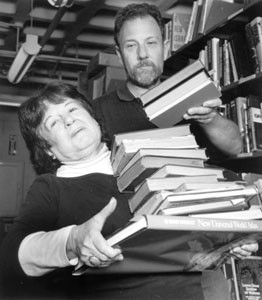 Stacked: Judy Weber and Jerry Benson of Friends of the Santa Rosa Libraries prepare for the annual Book Faire.

The Secret Second Life of Books

A constant ebb of patrons navigate through the shelves on the main floor of downtown Santa Rosa’s Central Library, but few know that beneath their feet lies a vast, unseen deposit holding thousands of other people’s books. This is the headquarters of the Friends of the Santa Rosa Libraries, and those books–enough to comprise a library themselves–are all waiting to be sold at the Friends’ 38th annual Spring Book Faire taking place April 12-15, the “biggest and best in the North Bay.”

“All of us are volunteers, and the thing that holds us together is that we all love books. We’re definitely not a bunch of ladies who lunch. It’s a hard-working group,” says Judith Weber, the Friends’ publicity chair. It’s a sunny Tuesday morning, but the tight rows of bookshelves and stacks of cardboard boxes lining the walls in the dim light of the Friends’ subterranean book vault cast a secret, otherworldly feel. Tuesday is the Friends’ most dynamic time of the week, when a crew of ten to fifteen volunteers gather to sort and price book donations that have amassed.

“It becomes another community, and people look forward to seeing their friends among the Friends,” says Jerry Benson, the Friends’ resident pricing expert and once a book dealer himself. “One of the problems with our volunteer base is [that] working people really can’t come in and help on a Tuesday morning. We’re hoping to attract more volunteers. We’ve had a lot of turnover in the last few years, where this older guard is getting to the age where they really can’t work in this environment.”

The Friends’ work is physically demanding in nature; a box of books can easily weigh forty pounds, and the daily scope of donations handled at the Central Library is immense. On the loading dock in the alley behind the library (the designated donation drop-off), a new cluster of bulging boxes will show up as soon as the last one was hauled away.

“Sometimes people donate things that have been in a basement or a garage forever,” Weber says. “People just don’t like the idea of throwing books away–it makes them very upset.” Every donation is sold, consigned, or recycled.

Even given the volume of donations dropped off at the library, the Friends pick up about half the donations themselves. “We get a lot of business from elderly people moving into smaller quarters,” says John Crabbe, a towering, barrel-chested retired professor who does the pickups. “Probably three or four a week, occasionally very big. I’ve picked up as many as 40 boxes.”

Not all donations are books. “We are starting to get more and more books on tape . . . and LP records,” says Crabbe. A few DVDs have also made their way downstairs and, two years ago, even a bust of Abraham Lincoln, which resided for a while in the former library director’s office.

Not all quality donations are hot items at sales, so the Friends have learned to utilize alternative methods. “A whole archive of comic books came in. We sold them at one of our fairs, individually marked, and there really was not that much of a market for it,” says Weber, “so we put them on eBay.”

The week of the Book Faire, the Friends rent their space at the Sonoma County Fairgrounds so they can set up. Starting first thing Tuesday morning, movers make countless trips from basement to loading dock, their dollies burdened with towers of densely packed boxes. On Wednesday, volunteers unload the books and the transformation begins. “It takes right up to the time the doors are open to get things set up,” says Weber.

And that’s when the floodgates open. “People line up like crazy–it’s opening day, our best attended and most frenetic part of the sale,” Benson says. (“Like the Oklahoma land rush,” as one crew member put it.) “People will buy up to $1000 worth of books.”

Hardback books are sold by the inch, while paperbacks–whether five inches wide or 10 pages long–are 75 cents each.

Collectible or rare books are priced individually and sold in the “Board Room,” an area set aside from the fair’s main floor. In the ’60s, the first fairs were held in the library’s courtyard, and when the fair moved into the library, the individually priced books were sold in the Board Room upstairs. The term stuck through the years, and though the name may sound intimidating, the prices are not. “These are low-priced books, the median price about three dollars. Some art books that originally cost $75 we might price at $25. We might have a first edition Mark Twain for $125 that you’d see on the Internet for $250. We try to keep them just about the cost a book dealer would pay,” Benson says. “Pricing level is one of the things that has made our show so successful.”

In the corner of the basement stands a table spread with books waiting for prices–some rare, some lavish, some hardly opened. Benson sifts through the piles, thumbing through the books and penciling prices inside their covers. “We have to steer a careful course on how we price books, because a part of our mission is to get books back into the community, as well as make money for the library.”

On “bag day,” the last day of the fair, browsers can fill a shopping bag for $4. “A couple of years ago this woman was just loading up–she wound up with something like fifty bags of books. I finally asked her, ÔWhat are you doing with all of these books?’ She makes lamp bases out of them, stacks them up and drills through them. You see, there’s a book for everyone,” Weber laughs.

The biannual book fairs are the Friends’ primary fundraiser. In 2001, the Friends raised an all-time high of $76,000. “It’s just amazing that we come up with the amount of profit that we do, and all of it, except for our expenses, is turned over practically immediately to the library.”

Funds raised by the Friends do not go to extravagances, Benson says. “What often happens to library systems is there are unexpected costs that aren’t provided for in the budget. You have to cut back on everything–which means the book budget gets smaller and smaller.”

“We try to insist that the money we turn over is used for books,” Weber says. “We are not trying to take the place of the funding that is provided by the community; we’re augmenting the money that would fall through the cracks otherwise. People may not realize what a profitable nonprofit we are . . . but the bigger our sales are, the more we are able to hand over directly to the libraries.”