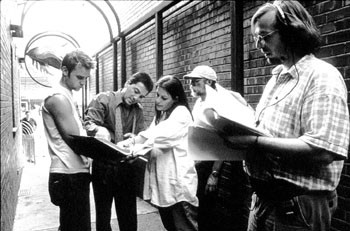 The Bread, My Sweet

An emotionally taxing film about a Pittsburgh community dealing with the terminal cancer of Bella, the family matriarch (a very sweet Rosemary Prinz). While the pulling of heart strings is unabashedly bold (bring Kleenex), the performances are raw and genuine. Scott Baio–forever trying to live down the Chachi stigma–plays Dominic, the family’s semiadopted son who will do anything to ensure that Bella dies happy–including marrying Bella’s lovely wild-child daughter (played by Kristin Minter of ER). Dominic–who runs the family bakery but has a day job as a ruthless and high-powered executive and drives a very fancy car–finds solace in the simple ingredients of his biscotti. Add a grumpy old man with a heart of gold as Bella’s husband and a developmentally disabled pie baker as Dominic’s brother, and the table is set for a rather heartbreaking meal. (Screens Thursday, April 11, at 7pm at Sebastiani Theatre, and Saturday, April 13, at 7pm at Sonoma Cinemas.) –Davina Baum

The second Scott Baio film to play at this year’s festival follows three working-class Italian cousins, each suffering from debilitating “father problems.” Desperate for some quality time with their well-meaning but emotionally distant dads (Alex Rocco, Dean Stockwell, and Joe Viterelli), the cousins resort to parental kidnapping, drugging their fathers’ spaghetti sauce and smuggling them off to a cabin in the woods for a weekend of father-son bonding. The smart, sensitive one is Richie (Baio, who also wrote the script), whose plot goes wrong in numerous ways. While Face to Face is decidedly rough around its indie-film edges–a bar-room brawl set in a strip club is especially awkward and clumsily filmed–the script is nevertheless consistently funny, with lots of clever dialogue and a sweet, emotionally believable core. Director Ellie Kanner coaxes first-rate performances out of the entire cast, especially Rocco, Stockwell, and Viterelli, three wonderful actors who don’t usually get to play such good guys. (Screens Friday, April 12, at 11am at Sonoma Cinemas, and Sunday, April 14, at noon at Sebastiani Theatre.) –David Templeton

The Road to Broadway

Hope Wurdack, founder and artistic director of St. Louis’ Theatre Factory, directed this affable documentary of “theater people”–the unknown, hard-working folk who are the workhorses of summer stock revues and touring Broadway companies. Following the pavement-pounding careers of about a dozen professional actors, The Road to Broadway sweeps away the glamour and strips it down to the grease paint and sweat. These are nonstop Actors, the kind of people who can’t help but perform the most mundane activities of life–like ordering pizza or hailing a cab–without injecting charisma. What we wind up with is a DIY documentary spliced with A Chorus Line and Waiting for Guffman. Although awash in Hallmark sentimentality and blind reverence for the acting life, there’s a bittersweet edge to the film: Ultimately, you know that the lure of footlights that so enraptures the film’s subjects will never fully illuminate them with fame. What’s poignant about the film is that they don’t seem to care; it’s the enchanting spell of the Great White Way that they cherish. (Screens Friday, April 12, at 11am at Sonoma Cinemas, and Saturday, April 13, at 11am at Sonoma Cinemas.) –Sara Bir

A grown son goes back to his boyhood home and faces a childhood demon: an emotionally abusive father who romps around in medieval garb on his birthday and runs a halfway house of sorts for the town’s wayward boys. The son’s on-again, off-again fiancée comes along too; she is willing to help her husband-to-be make amends, knowing that the family woes are at the root of her beloved’s inability to commit. But when his father falls ill, the son must take on more than he bargained for to save the family house, facing angry wayward kids plus a surprise half-sister. Slow-paced but worthwhile, Liberty, Maine meanders through terrain wrought by honest emotions. (Screens Friday, April 12, at 12:30pm at Sebastiani Theatre, and Saturday, April 13, at 4:30pm at Sonoma Cinemas.) –Davina Baum

Queen of the Whole Wide World

Put a camera in front of a drag queen, and entertainment is almost guaranteed. Put cameras in front of a world’s worth of drag queens competing for the crown, à la Miss Universe, and it’s fairly impossible to go wrong. This documentary follows competitors like Miss Ireland (named Connie Lingus) and Miss Antarctica (who is snow blind and was raised by animals) through the whole process, from precontest preparations to the talent competition and the crowning. The men underneath all the makeup give running commentary (including jokey cattiness–“Miss Antarctica, well, she’s just a cuntinent”). Comments from competition judges such as Julia Louis-Dreyfus, Kristen Johnston (who both look remarkably drag-queeny themselves), and Eric McCormack add star flavor to the mix, while the requisite coming-out stories and homophobic relatives add dimension, somehow avoiding hokiness. (Screens Thursday, April 11, at 9:30pm at the Sebastiani Theatre, and Sunday, April 14, at 4pm at the Sonoma Cinemas.) –Davina Baum