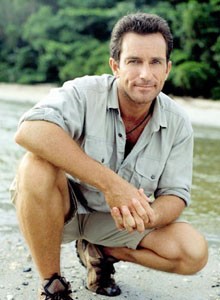 There is a definite “dream come true” vibe emanating from the phone this morning. An ebullient Jeff Probst–best known as the khaki-clad host of TV’s hit show Survivor–is driving through Los Angeles, talking to me on his cell phone about a recent life-changing event, and the giddy, boyish exuberance with which he speaks is thick enough to chew.

The event Probst is describing did not take place on some exotic island in the South China Sea or the Marquesas, nor in Australia or even Africa–the picturesque locations where Survivor has been filmed over the last couple of years. On the contrary, this particular event took place on a tiny movie set in Canada over the course of a 17-day shoot on a little drama called Finder’s Fee, which is featured at the Sonoma Valley Film Festival’s special Tribute Night on Friday, April 12. The low-budget thriller stars James Earl Jones, Robert Forster, and a cast of up-and-coming actors including Erik Palladino and Matthew Lillard, and–get ready for the “dream come true” part–it also marks Jeff Probst’s debut as a motion picture writer-director.

“That’s how I’ve always seen myself,” he says with a laugh. “I’m a writer-director. A student of the human condition. And most people only know me as the guy on Survivor. But that’s all right. The time will come when it comes.”

Finder’s Fee itself will be coming this weekend as a main event of the fifth annual Sonoma Valley Film Festival. Probst will be on hand as well, where he’ll be receiving an award as Best Breakthrough Director. By his side will be Forster (The Black Hole, Jackie Brown), honored with a Lifetime Achievement Award, and Matthew Lillard (Hackers, Serial Mom), picking up the prize for Best Breakthrough Actor. Finder’s Fee had its official debut earlier this year at the Seattle Film Festival, where it captured the Audience Award for Best Film, but it’s been screened only rarely since then, while Probst works hard–in between Survivor shoots–to find the movie a national distributor.

“Honestly, I can’t wait to see Finder’s Fee with an audience again,” he says, almost shouting, as the buzzing hum of traffic whizzes by in the background. “I haven’t had that many opportunities to see it on the big screen yet, really, so this weekend will be very exciting.”

Finder’s Fee is a pitch-dark psychological thriller with a roller coaster of a plot, and–skeptics take note–it’s good. The story follows one night in the life of Tepper (Palladino, better known as Dr. Malucci on ER), a young guy with a good heart and some baffling relationship problems. On his way home to a weekly poker game with his friends, Tepper finds a lost wallet and brings it into his apartment. After leaving a message at a phone number found in the wallet, Tepper discovers that it also contains a winning lottery ticket worth $6 million. Before he has time to think, Tepper’s poker friends start showing up, followed quickly by Avery (James Earl Jones), the owner of the wallet.

Acting impulsively, Tepper switches the winning ticket for his own losing ticket, but before he can show Avery to the door, the apartment building is locked down by the police, who, represented by a grouchy cop played by Forster, are conducting a door-to-door search for an escaped criminal. With no other choice but to stick it out inside, the younger men, spurred on by the verbally aggressive Fishman (Lillard), invite Avery to join their poker game, setting off a whole series of mental games and double crosses as the guys come to suspect that something is up. All the while, Tepper–desperate to get away with his crime–begins to wrestle with a growing sense of guilt, and Avery calmly watches the events unfolding unpredictably around him. The whole thing is disturbing, claustrophobic, remarkably tense–and great fun.

“I could not be more proud of Finder’s Fee“, says Probst. “We made a good little movie with great people, and I was the benefactor of all of it because I was clearly the weak link in this project.”

Probst says a lot of things like that. He clearly relishes the fact that his first movie was a labor of love for a large group of people, and he seems to think nothing of portraying his own contributions as those of just another player in a game–a game he’s loved every minute of.

“That this experience was a dream come true was never lost on me during the filming of the movie,” he continues. “Even when I was wetting my pants on the set, trying to keep my brain out of panic mode, there was definitely another part of my brain going, ‘How cool is this? To have this problem? How cool that I actually have to figure out how to cut a scene because I’m behind on time?’ It was never lost on me, just as it’s never lost on me every time we do a tribal council on Survivor either. I always think, ‘How cool that I have such a great job.’ So many people would love to have this job, but somehow I’m the idiot that fell into it.”

While there are undeniable parallels between Finder’s Fee and Survivor–a small group isolated together, deceit, backstabbing, alliances, betrayals, and a big cash prize for the ultimate winner–the script for Finder’s Fee was actually written a full year before Probst had ever heard of Survivor. The movie was then shot in 2000 in between filming the first and second Survivor seasons. On the strength of the edgy, little script, Probst was able to persuade the cast to spend three weeks in Canada working for next to no money, trusting a game-show host who’d never directed a feature film and who, in fact, had recently become famous for intoning lines prone to parody, such as “Fire represents life” and “The tribe has spoken.”

Probst allows that his first few days on the set were spent mostly just trying to find his footing, to begin to feel comfortable in his long-dreamed-of role as director. And while he clearly warmed to the part, Probst admits there were moments that all but took his breath away.

“Imagine walking onto the set the day we shot the scene with Robert Forster and James Earl Jones,” he says. “My jaw was hanging open most of that day. That was probably my best day in terms of memories. I’m sitting there watching Forster interrogate James Earl Jones and inside I’m thinking, ‘Oh my God! These guys are both in my movie!'” Probst relates his thoughts in a high-speed, high-pitched squeal of mock hysteria. “I can’t believe this! I wrote those words! James Earl Jones is saying my words!'”

James Earl Jones, in fact, gives one of his best performances in the last 15 years in Finder’s Fee. When asked how much of that was due to Jones and how much was do to Jones’ director, Probst remains humble.

“With an actor like James Earl Jones, it’s all him,” Probst says. Joking only slightly, he adds, “My direction consisted mainly of my asking, ‘Do you want me to put the sugar in before the cream, or do you want your coffee straight?’ I suppose it’s true that part of his performance came from the script, but beyond that it was all James Earl Jones.”

For Probst, this is the perfect time to share a favorite story from the set of Finder’s Fee.

“We’d been shooting for three days,” he says, “and the young guys were all flitting around the room, flexing their muscles, and feeling very confident. Then, on day four, James Earl Jones shows up.” According to Probst, the mood on the set instantly switched from informal to formal. “Suddenly, nobody’s talking,” he laughs. “The lippy grip in the corner has even shut up. I’m sitting there thinking, ‘Oh, man. This is a disaster. I’ve been a movie director for exactly three days. There’s no way in hell I know what to do here.’ And no sooner said than done, James Earl Jones, with no setup, leans across to Ryan [Reynolds] and says in that famous deep voice, ‘Luke, I am your father . . . motherfucker.'”

“That was James Earl Jones aware of the impact he has on a room, being able to bring things down to a workable level so we could just get to work. So one of the best anecdotes I have in my life came from James Earl Jones helping me out. Hell, if it wasn’t for his agreeing to make the movie, it might not have happened at all.”

As a reminder of this, Probst explains, he carries a little metal angel in his car. “It’s right here,” he says. “Whenever I look at it, I know–my angel was James Earl Jones. I don’t know why that makes sense. But it does.”

Probst says that whether Finder’s Fee ends up with a distribution deal or not, his next step is to keep the energy flowing and to one day help make someone else’s dream come true.

“First, we have to make another movie,” he says, “then a third movie. Then we have to keep the cycle going. We have to go find a young filmmaker and start mentoring them, to help them get going. That’s how you keep this thing spinning.”

‘Finder’s Fee’ screens on Friday, April 12, at 6:30pm at the Sebastiani Theatre, Sonoma, as part of the Sonoma Valley Film Festival’s Tribute Night Program. Robert Forster, Jeff Probst, and Matthew Lillard will be in attendance. Tickets are $100 for the event. The film also screens on Sunday, April 14, at 5pm at the Sebastiani. See www.sonomafilmfest.org for a full program schedule.