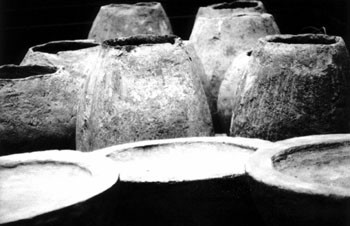 The Cazadero rain gauge stands full in April, measuring more than the annual 80 inches, and it’s still coming down. “Do you know where we live?” insists sculptor Brad Wilson by telephone. Yep, he’s assured, up on that high, bony ridge between Jenner and Timber Cove, on the breathtaking but hardscrabble stretch where Meyers Grade acquiesces to Seaview, linking civilization to the ocean.

Please may I come?

Giving way to sudden meadows, racing shortly around tree-darkened corners, and undulating quickly up and just as quickly down past blackberry brambles, flustered quail, blue-water views, and old country orchards, this road offers more than just a detour from the nausea of the ocean-road curves. It’s a hugely romantic road, populated to the tourist’s eye almost solely by structures and art studios, but lived on by whom?

Well, artist Bruce Johnson resides up here; more famously, composer John Adams (Nixon in China, The Death of Klinghoffer) keeps a home. And so, too, do Wilson and his partner, sculptor Pamela Holmes, prosper away in this rural aerie with their two sons. But it ain’t easy.

On a morning when most of Sonoma County rests lightly under a warm swathe of fog, it’s pounding nail-like points of rain up here. A slippery mud stream across from the Ft. Ross elementary school slides one downhill through the thick, forest muck to Wilson and Holmes’ studio. The car stops with an unfortunate shudder, seemingly aware that the only way out is to reverse straight back up. Wilson and Holmes appear, sturdily dressed for a wet round of coaxing the sticky dust of wood, the quick-set tack of cement, and the hair of some 2,000 pounds of industrial hemp into forms that both please and service.

It’s just another day at work for them, whose vessels and earth-bound artifacts are showcased in “Emergence,” a group show exhibiting through May 26 at the new Anne Bradford Gallery in Healdsburg.

This, perhaps, is not the life that the couple envisioned for themselves. Collaborating on their artwork for the last 25 years, the two attended Sonoma State University, studying printmaking and lithography from the first year the art department opened in the late ’70s. “We had all the paper we wanted!” Holmes still fondly enthuses. Together they got their masters degrees at the Otis College of Art and Design in Los Angeles, trying the gamut of materials before settling on clay and cement. They placed televisions in the stuff, crafted moss-topped tables that required constant watering to stay greened, and increasingly found themselves misaligned with the terminally hip L.A. art scene.

“We just wanted to do natural things and everything was urban, urban, urban,” Holmes explains, raising her voice to compete with the peppered blast of water resounding on the studio’s roof. Escaping the urban to its opposite 10 years ago, the two cast about to make a living. Holmes had been catering to keep them financially afloat, and the importance of the table, its significance both mundane and metaphoric, ignited their imaginations. So they did what any starving artists with babies in the high, stormy reaches of Sonoma County would do: They taught themselves to make furniture.

“I probably drive [professionally trained] woodworkers nuts,” Wilson admits with a chuckle. Using cast-off, found, and otherwise recycled wood for their bases, Wilson applies his hard-won MFA to crafting the bottoms while Holmes casts the concrete that forms each table’s top. Embedded in the cement are flax husks, poppy and sesame seeds, and the ubiquitous hemp that she purchased in huge amount last year and is now perennially dedicated to using in everything but the soup, giving the tops a smattering of such perfect chaos as nature itself specializes in.

“I love rocks,” Holmes explains, “I love the stoniness and permanence. And this is as close as I can get to making something that appears utterly natural. That,” she says, pointing to a nearly finished tabletop, “could be a rock.” And indeed, though one must wear a glove when caressing the drying epoxy finish, the surface has that marvelously pebbled, erratic surface as would something that spewed forth from the earth 10 million years ago. Except that it looks great in a dining room.

When not making tables, Holmes often weaves hemp to form the internal structure of large urn-shaped vessels. The cement is hand-shaped over this fibrous, ropy mass to create utterly organic yet utterly human-made shapes. In a vessel titled Wine and Water, she has soaked the inside of the container with red wine in order to “give it a little history. I went to Catholic school, and the wine and bread were such rich metaphors. I had wonderful nuns for teachers and they made [the Church’s stories] into a visual history. I wanted to underscore the importance of the ritual that we no longer have in our time.”

Retailing their work through the Gardener stores in Healdsburg and Berkeley, the couple now has the slight leisure of making such abstract forms as please them, particularly those that catch water. “Water is a form of grace,” Holmes says, standing outside in plenty of it. “You know: ‘Your cup runneth over.’ There’s a whole historical dialogue to engage in with water. And I like the idea that it’s the world’s spiritual energy.”

Similarly, with what can perhaps be called a diptych, Holmes and Wilson have created two 48-inch water-retaining tables meant to be placed side by side titled Bread and Water. Atop one rests a woven hemp blanket alongside inert loaves of cement bread. “There’s political content in this piece,” Holmes admits. “Bread and water are the basic things we need to get by. The hemp is the First World/Third World conflict we’re in. The Islamic people want to live in the time of Mohammed; this mystifies Americans, but I understand–it comes down to the beauty of raw ingredients. We’re such addicted materialists.”

Were we as a culture not so addicted, of course, Holmes and Wilson would be out of work. But for them, materialism is of small concern. Given enough good land, a wood-burning stove that works, some fallen trees, a bag of cement, a secure studio, garden-grown food and flowers, and a tall, dry roof in a handmade house with the relentless squawking of pet birds echoing off the stone floors and cement tiled walls–and that’s enough for one family to make an artful life on the high, bony ridge between Jenner and Timber Cove.