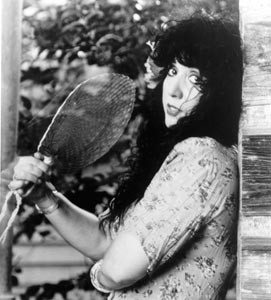 WHAT A GEM! This is the first major work since 1994’s Shootin’ Straight from singer/songwriter Dan Hicks, a Marinite who made his mark in the early ’70s with wryly turned phrases and a fondness for sentimentality, old-timey acoustic arrangements, and blues-inflected country swing. And it’s well worth the wait. Lots of big-name guests here: Elvis Costello, Tom Waits, Rickie Lee Jones, Brian Setzer, and Bette Midler. The Hicks/Waits duet on the hipster stomp “I’ll Tell You Why That Is” is the show-stopper, but this is pure Hicks all the way–an often cornball, sometimes tender, always hip tunesmith who remains unflinchingly true to his own quirky vision.

SEBASTOPOL R&B legend Johnny Otis is no slouch as a talent scout. And here Otis shows that he hasn’t lost his touch. In the past, Otis “discovered” Etta James, Esther Phillips, Marie Adams, and a slew of other great female vocalists. This widely ranging album, featuring Michigan native Barbara Morrison, is designed to showcase Morrison’s diverse talents. That’s good and bad. Morrison ably handles everything from gut-bucket blues to doo-wop, straight-ahead R&B to jazz. But you sort of wish for a little more even-handedness in the song selection. Still, Morrison is a real find and shouldn’t be overlooked.

THE RECENT MURDERS of his ex-wife and daughter overshadowed the release of this terrific set of good-rockin’ blues by west Marin guitarist Elvin Bishop and his longtime mentor, Chicago bluesman Albert “Little Smokey” Smothers. Recorded live earlier this year at Biscuits & Blues in San Francisco, the CD delivers plenty of Bishop’s trademark self-deprecating tongue-in-cheek humor while he trades red-hot licks with the guitarslinger he first met 40 years ago while Bishop was helping to make the blues palatable for white audiences as a member of the legendary Paul Butterfield Blues Band. A feel-good album from a performer whose life has been mired in tragedy.

NEARLY 30 YEARS after blues diva Maria Muldaur steamed up the charts with the sultry pop hit “Midnight at the Oasis,” she is in peak form and fanning the flames of passion in this sizzling collection of unsentimental love songs. Culled from her last three Telarc releases, this album displays Muldaur’s strengths as a savvy song interpreter, turning up the heat on robust tunes by Greg Brown, John Hiatt, and others. And does she have friends? Background vocalists include Mavis Staples, Ann Peebles, Lady Bianca, Tracey Nelson, and Charles Neville. Let your hormones run wild.