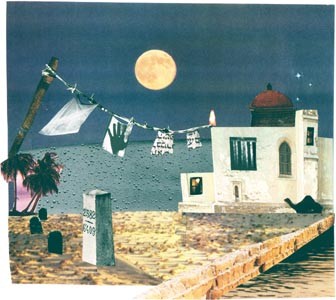 UNTIL HIS DEATH last month in Jerusalem at the age of 76, Israeli poet Yehuda Amichai was a strong contender for the Nobel Prize in literature. His books were translated into 37 languages beyond the original Hebrew, and Amichai has long been one of the planet’s pre-eminent poets. The evidence in English is abundant, most notably up to now in two substantial volumes: The Selected Poetry of Yehuda Amichai, translated by Chana Bloch and Stephen Mitchell (Harper & Row, 1986; revised and expanded edition, 1996), and Yehuda Amichai: A Life of Poetry, 1948-1994, translated by Benjamin and Barbara Harshav (HarperCollins, 1994). As if that weren’t enough, last spring we were given what the jacket flap touts as his magnum opus, a tightly integrated sequence of poems translated by Bloch and Chana Kronfeld, Open Closed Open (Harcourt; Brace; $25).

Amichai is a connoisseur of the paradoxical. By turns, and often at the same time, erotic and metaphysical, devout and skeptical, earnest and ironic, grief-drenched and dryly witty, his poems investigate contemporary realities from a biblical perspective and rethink biblical stories from a contemporary angle. Jewish down to the bones, his humanity is broadly universal, obsessed as he is with time and death, war and peace, love and memory, joy and suffering. Zionist in his attachment to the rocks and sand of his homeland (Amichai immigrated to Palestine from Germany in 1936 at the age of 12), still he is not a nationalist in the political sense of that word.

Rooted in the geography of the desert landscape, its physical details and sensations, its ancient and modern history, its cosmic mysteries, Amichai is also the most intimate of love poets, as passionately entangled with his woman as with his country. He finds in the lover’s embrace both evidence of the divine and consolation for its absence. The human body–his own, his lover’s–is a garden, a battlefield, a sanctuary, an oasis, a meeting place of the temporal and the eternal.

As a Jewish atheist Taoist existentialist, I am not favorably predisposed toward theological discourse. Religious orthodoxy of any kind, with its authoritarian overtones, tends to provoke my inner anarchist. But Amichai’s poetry, religious as it undeniably is, cultivates such a shrewd irreverence and is so alive with insight, so earthy and individual, that it’s irresistible even to a disbeliever. In a poem called “Gods Change, Prayers Are Here to Stay,” he offers this lesson in comparative religion:

Is nothing sacred to this wise guy? Well, yes and no. Perhaps the poet’s imagination is what it takes to revitalize exhausted dogma. A little further along in the same poem Amichai suggests this himself:

This sense of a faith at odds with itself, of a person wrestling with his own belief in search of spiritual truth, gives the religious dimension of Amichai’s poetry far greater weight and resonance than more conventional affirmations of piety.

The political slant of these poems is even more elusive. Fraught with history, violence, and the ongoing geopolitical (and theopolitical) arguments that have wracked his land since long before it was a Jewish state, they almost never address directly the “issues” we see debated in the newspapers. Unlike such leading Palestinian poets as Adonis and Mahmoud Darwish–who, exiled from their home and constantly trying to correct that loss, invoke a collective nostalgia, defiance, and urgent thirst for justice–Amichai seems to see war and peace, terrorism and coexistence, even borders, as difficult realities endemic not only to the region but to the human condition. He reflects on his own combat experience, the fear and courage of soldiers, his son and daughter being drafted and disappearing on buses with their faces “in the corner of the window like a stamp on an envelope,” and “the thud of the censor’s seal like the hammerblow of fate,” but the only explicit protest in his poetry–and even that is muted by a sigh of resignation–is not against the censor or any government or enemy, but against fate itself, or God, or whatever demonic force it is that causes humanity to lust for its own blood.

Like an archeologist, the poet excavates and sifts the subpolitical evidence for clues to the deeper dynamics driving human conduct. “Jerusalem, Jerusalem, Why Jerusalem?” should be read by anyone seeking to understand why it’s so vexing for any government–let alone two or three governments and as many religions–to resolve the question of whom that city belongs to. “I always have to go in the opposite direction to whatever/ is passing and past,” he writes. “That’s how I know I live in Jerusalem.”

Going “against the tide of pilgrims,” swimming upstream against “the joy- parades,” thriving on the principle of opposition, the poet is divided against his own people, who are in turn divided among, and sometimes within, themselves.

How could he or anyone expect whole states to agree on anything?

As usual, it is the lovers who offer a glimpse of relief from such madness, albeit with their own brand of fanaticism:

Two lovers talking to each other in Jerusalem with the excitement of tour guides, pointing, touching, explaining: These are my father’s eyes you see in my face, these are the sleek thighs I inherited from a distant mother in the Middle Ages, this is my voice which traveled all the way here from three thousand years ago, this is the color of my eyes, the mosaic of my spirit, the archeological layers of my soul. We are holy places.

Is Amichai being allegorical? Could these lovers be Jew and Arab? Are the bodies, animated by history and desire, mystically related to a body politic that might transcend hatred and ideology, united by Eros–praise Allah, thank God, “amen and may it come to pass”? Or is it only that he sees in sexual love a kind of redemption, though not without its own struggles for power and sovereignty?

The poignancy of our earthly sojourn, its ephemeral sweetness, the pregnancy of the smallest human gestures, the haunted beauty and richness of the most mundane things and events–none of this is lost on the poet. He dares to tackle cosmic themes in domestic terms, as in “Houses (Plural); Love (Singular)”:

We lived in many houses and left remnants of memory in every one of them: a newspaper, a book face-down, a crumpled map of some faraway land, a forgotten toothbrush standing sentinel in a cup– that too is a memorial candle, an eternal light.

If even a toothbrush, in Amichai’s universe, can be a sacred object, how much more sacred then must be the hand that holds the toothbrush, and the lovers’ hands caressing each other, and the disembodied memories themselves, and the minds remembering. With Amichai, ripples of implication set out from the simplest phrases and spread indefinitely.

His lines are almost prosaic in their conversational quality, and yet they are subtly rhythmic, lyric, layered with associations. I don’t read Hebrew, but in these English versions by Bloch and Kronfeld I feel I am getting the mood, the tone, the pace, the punning wit, the linguistic mischievousness of the original, or as close an approximation as one could hope for. They catch, in colloquial English, the contradictory currents and emotional riptides under the calm surface of Amichai’s measured voice.

“Real meaning, for Amichai,” Bloch and Kronfeld wrote recently in The American Poetry Review, “resides not in language . . . but in the ‘soul-stutterings’ of human emotion.” It must be that subterranean stutter that paradoxically informs these expert translators’ eloquence in representing not just the words but the spirit of this extraordinary poet. *

From the October 12-18, 2000 issue of the Northern California Bohemian.