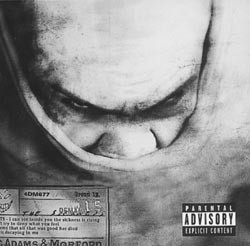 BEST DESCRIBED as “looking for love in a hall of mirrors,” Madonna and producer William Orbit’s gambit on this soundtrack is to surround real Madonna vocal tracks –“American Pie,” “Time Stood Still”–with mimicked ones. At the start, you get princess Christina Aguilera in a warble-strut mode, resembling something off Madonna’s Like a Prayer LP. Right after “Pie” is Mandalay’s sexy-as-hell synth-housescape tune “This Life,” with whispers and eroticized huffing all in their proper places. This begs the question: How much could Madonna win in court for self-plagiarism? Edward Crouse

THIS HEAVY four-piece band from Chicago would go over well on the metal scene. Although Disturbed lift from bands like Korn, Tool, Ministry, and Static-X, the result is reasonably distinctive and cleanly produced. Vocalist David Draiman barks out abrupt, screaming vocals full of stream-of-consciousness lyrics and metal-rap verse. From the fast-paced “Voices”–a metal assault full of electronic swirls, pulses, and scratches–Disturbed take detours into Orgy-styled dance beats (“The Game”), ghetto synths (“Fear”), and tribal rhythms (“Down with the Sickness” and “Conflict”). The most striking song is the twisted “Meaning of Life,” with the repetitive lyrics “wanna get psycho.” The band also covers Tears for Fears’ “Shout” (“Shout 2000”). Disturbed are consistently heavy on bass, percussion, and guitar, and their complex songs are full of melody. Though it’s not doing anything revolutionary, the band is a solid addition to the neo-industrial rock-metal movement. Sarah Quelland

NSN’S 30TH-ANNIVERSARY reissue edition finds both Randy Newman’s early songs and Harry Nilsson’s decathlete voice ageless. Newman’s piano playing is quiet and spare, and can’t help but sound humbled by the labyrinthine multitracked vocals. “I’ll Be Home,” for instance, has Harry singing plaintive lead while acting as his own call-and-response gospel squad. But hearing him growl like Mahalia Jackson is just half of the matter. While the vocal personalities are densely webbed, their beauty transcends their status as whirligig gimmicks. Nilsson’s team of voices peel away at Newman’s firm, almost filmic sensibility (“The milk truck hauls the sun up/ the paper hits the door/ and the subway shakes my floor/ and I think about you”). It’s still luscious. E.C.