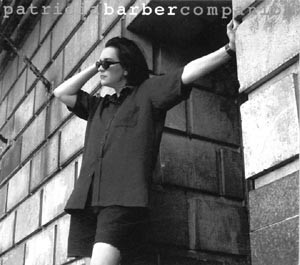 A bit of blues, a splash of psychobilly

DIANE KRALL got a heap of attention in all of those tedious year-end top-pick lists. The only trouble is that the jazz pianist and singer comes across like a lounge act with a damn good p.r. agent–her song selections bottomed out last year when Krall covered Michael Franks’ insipid ode to cuddly companions “Popsicle Toes.” Unfortunately, the media machine for the most part ran over the excellent release by Chicago native Patricia Barber. She basically does the same shtick as Krall, but Barber has a gritty barroom sensibility that resonates in this live date recorded at the legendary Green Mill, an internationally known Chicago club that helped spawn the whole nouveau hipster scene. The originals are engaging, the covers of Sonny Bono’s “The Beat Goes On” and Bill Withers’ “Use me” are modern-cool classics. Hailed as both the No. 1 talent deserving of wider recognition (1999 Downbeat International Critics’ Poll) and the jazz musician most likely to reject success, Barber is a real winner. This is a companion you should, ah hum, Krall to with open arms. Greg Cahill

The Hellacopters Payin’ the Dues (Sub-Pop)

THE CHUCK BERRY family tree runs through the Rolling Stones and the MC5 and branches out to Black Sabbath, the Sex Pistols, and every piece of hard rock that’s come since. Sweden’s the Hellacopters aren’t just a link in that chain, but a reminder that the line between punk and metal is historically thin. Style differences between the genres always funnel into the louder/faster/harder ethos, and the Hellacopters use that ethos to blitz past their influences. “Hey!” uncorks the Clash’s second album, “Looking at Me” sounds like a lost Lynyrd Skynyrd hit, and “Twist Action” is flaming psychobilly, while “Like No Other Man” spits out the riff from Kiss’ “Deuce” at 78 rpm. Payin’ the Dues is only $10 and has a bonus live disc that’s longer (and heavier and nastier) than the actual album. And these guys play some monstrous Chuck Berry licks. Karl Byrn

Various Artists Fire and Skill: The Songs of the Jam (Epic)

DURING THE GREAT and glorious punk heyday (circa 1977), the Jam were almost universally dismissed as mod revivalists, a fact owing to the band’s earlier roots in the British rock and soul scene. Headed by Beatles fan Paul Weller, the band racked up nine Top 10 hits on U.K. pop singles charts before disbanding in 1982. But the band’s high-energy pop and adventurous sonic experiments earned plenty of fans over the years. Some of them have come together on this 11-song tribute, including Liam Gallagher of Oasis and Steve Cradock of Ocean Color Scene (who team up on a cover of “Carnation”), the Beastie Boys, Garbage, Buffalo Tom, Ben Harper, and Everything But the Girl. Oasis songwriter Noel Gallagher closes out the set with a rendering of “To Be Someone,” Weller’s tender commentary on the ephemeral nature of fame. You could write this off as much ado about nothing, but bear in mind that Pete Townshend, everyone’s favorite proto punk, once extolled the Jam as representing “everything that is vitally important in rock.”

PRAISE THE LORD! Singer and guitarist Terry Evans returns with his gospel-tinged R&B backed by a crack band that features guitarist Ry Cooder, drummer Jim Keltner, and background singer Willie Green Jr. Pure heaven. As one half of a vocal duo that once included West Coast soulman Bobby King, Evans has performed over the years with John Fogerty, John Hiatt, Cooder, and a slew of other cats who know something special when they hear it. The Evans/King duo recorded a few well-received albums during the late ’80s and early ’90s before parting ways. This third solo CD finds Evans soaring, moving easily through a soulful set of gospel stomps, blues shuffles, and R&B ballads. With roots steeped in the Mississippi tradition of his youth and one foot still in the choir box, Evans is an R&B tour de force. G.C.

The Supersuckers The Evil Powers of Rock ‘n’ Roll (Koch)

THE SUPERSUCKERS are the type of super-basic, super-hyper bar band that sounds pretty damn good if you’re sober and pretty friggin’ awesome after four beers. Hailing from Tucson, these ferocious focused cowpunks form a link between the Ramones and Merle Haggard (sounding like the former while covering the latter on “I Can’t Hold Myself in Line”). After a failed major-label deal gave them a bad taste of so-called success, they’ve joyously returned to the grungy, speedy sound of their Sub-Pop roots. It’s a disc that you don’t need for musical news, but you do need for, well, the evil powers of rock ‘n’ roll. It’s a two-ton shooting star, so belly up to the bar and make a wish while you can.

THE MUSIC of Indonesia–a far-flung nation where 300 ethnic groups inhabit 3,000 islands–usually brings to mind the ancient art of gamelan, which consists largely of gongs and other metallophones. So these 12 tracks of mostly acoustic guitar-based music are something of a revelation for Western ears. The often simple, graceful melodies–played behind a variety of vocals–sometimes recall the sound of the Appalachian hills, a world away. At other times, the tracks evoke crude classical styles, Hawaiian slack-key guitar, or even hybridized pop/jazz. Fascinating stuff. Easily one of the most intriguing world-music CDs to come along in months.