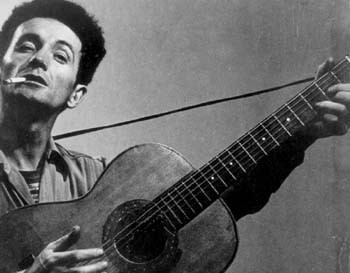 This exceptional specially priced four-CD box set, recorded between 1944 and 1949 for Folkways label chief Moses Asch, makes a convincing argument that Guthrie–the man who reinvented the American folk ballad as a vehicle for social comment and protest, and whose “This Land Is Your Land” is the unofficial anthem for many Americans–should top any list of the century’s most influential musicians.

While Guthrie performed extensively starting in 1929 and throughout his wayward travels, not until 1940 did the Oklahoma native sit down with Alan Lomax to make his first recording, several hours of talking and singing for the Library of Congress. But it was Asch who recorded 85 percent of Guthrie’s material, the bulk of that during a marathon session in March-April of 1944, while Guthrie was on shore leave from the merchant marines.

Guthrie died in 1967 after a long and debilitating bout with Huntington’s chorea, a degenerative nerve disease. Since then, many have sung Guthrie’s legacy: Everyone from Bob Dylan to Bruce Springsteen has worshiped the man who rode the rails as a hobo during the Great Depression, chronicling the dust-bowl era, and who was denied membership to the Communist Party for refusing to renounce his religion.

The songs themselves–still bristling with a rustic vitality that echoes the hopes and dreams of a nation–bear testimony to Guthrie’s extraordinary skills as a folk artist. Here, the Smithsonian Institution has split these 105 tracks into a series of themed anthologies that reflect the spirit of his times.

“This Land Is Your Land” features 27 of Guthrie’s best-known songs, including a version of the title track with never-before-issued lyrics.

“Muleskinner Blues” is comprised of 25 tracks from the original 160 songs that Guthrie recorded with his friend Cisco Houston and other musicians for Asch in 1944. The CD focuses on non-original songs that Guthrie covered, including American folk standards, many of which became a part of the folk music canon through Guthrie’s influence. It includes three previously unreleased tracks

“Hard Travelin'” presents 27 mostly topical songs written by Guthrie. Written during the 1930s and 1940s, the songs serve as a musical time capsule, commenting on the war, the dust bowl, labor martyrs, and other topics. The tracks range from such well-known Guthrie ballads as “Mean Talkin’ Blues” to more obscure and unfinished projects like his remaking of the “Rubaiyat of Omar Khayyam.”

“Buffalo Skinners” delves into Western themes, 26 recordings that emphasize Guthrie’s Oklahoma roots and the restless sprit that sparked the great Western expansion shortly before and after World war II.

In the end, the man that many American officials despised for his ability to express the feelings of the broke and downtrodden, may be the best friend America ever had.