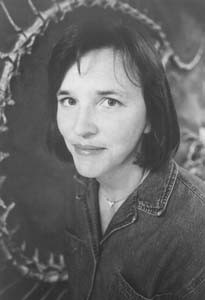 “STOP,” SAYS Sarah Andrews. “Wait. I’m being too dramatic. Forget everything I’ve just said.” Matter of factly, Andrews waves a hand through the air, sweeping away the last five minutes of conversation.

The multitalented geologist, author, and educator–she teaches the “Dinosaur Class” at Sonoma State University–has been discussing her latest book, Bonehunter (St. Martin’s Press; $24.95). It’s the fifth novel in a unique and increasingly popular mystery series featuring forensic geologist Em Hansen, a scientist-turned-sleuth whose knowledge of the earth often gives her the edge over all those run-of-the-mill detective types. The Hansen series began with Tensely, followed by A Fall in Denver, Mother Nature, and Only Flesh and Bones.

In Bonehunter, Hansen undergoes a kind of crisis of faith when she finds herself accused of murdering an esteemed Salt Lake City paleontologist. The resulting desert-hopping whodunit–which coincides with a tense local battle between evolutionists and creationists–forces Hansen into dangerous terrain, both ideological and literal, as she begins to fall for a Mormon police officer and ends up fighting for her life in the secret dinosaur bone-fields of New Mexico. Bonehunter makes you think, while remaining a grade A mystery, a kick-in-the pants page-turner.

“My point in writing the book, besides writing a great story, is to open up a discussion of beliefs,” is what Andrews had originally been saying about Bonehunter. “I wrote it as a plea for openness, a plea for kindness, for understanding.”

And this is where she stopped.

“OK, that’s not why I wrote it,” the 48-year-old Graton author confesses, “though I hope it does do those things. The truth is, I wrote it because I was fed up.”

“I’ve had it with being called an atheist, just because I happen to be a scientist. It’s not true! Being an atheist does not necessarily follow from being a scientist.

“I mean,” she adds, “Albert Einstein used the word God in every other sentence, right?”

It’s true. It’s also true that this happens to be a remarkably good time to unveil a novel that dares grapple with such issues. The Kansas Board of Education’s recent decision to remove the teaching of evolution from the state’s mandatory science curriculum has once more brought the simmering battle between science and religion to a fast boil.

“Yeah, what luck,” Andrews says of Bonehunter’s fortuitous arrival in the middle of this high-profile debate. “Though I admit I set out to write a more commercial book this time, who could have guessed that the timing would be so perfect?”

Without apology, she tells of her family’s intuitive knack for sensing when another family member is about to die, an ability Andrews has experienced firsthand. Such metaphysical flirtations were abandoned, though, when she became a student of geology, tossing the spiritual world aside for a life of hard facts and provable equations.

After graduation, Andrews worked for the U.S. Geographical Survey, then spent several years in the “Oil Patch,” working for various petroleum companies until the price of oil dropped through the floor and she was laid off.

THINKING she’d turn her experiences as a geologist into a memoir, she took a class on autobiographical writing. However, the baffled instructor offered Andrews the following critique:

“You write like the best of the hard-boiled detectives,” she said, “but I must admit I find the voice a bit jarring.”

“It was the best unintentional advice I’d ever received,” Andrews says with a laugh, adding that her teacher’s words inspired her to transform her geological exploits into a mystery novel. Thus was Em Hansen born. With the release of her first novel, Tensely, it was clear that Andrews was on to something: a unique perspective, a one-of-a-kind main character, and the ability to create a good potboiler while actually writing some magnificent, lilting prose.

“In mysteries, traditionally, the story is everything and the writing is secondary,” she acknowledges. “Putting a lot of well-crafted prose into a mystery novel feels a bit like peeing in a dark suit. Who’s going to notice?”

All during this time, Andrews was struggling with the hard separation between provable phenomena and the mysterious events of her youth.

“I was indoctrinated by the stark scientific outlook of the world,” she explains, “but then I was bombarded with daily events that were, for lack of a better word, metaphysical in nature. At one point I finally told my rational mind, ‘OK, I think I’m going to allow myself to consider this stuff now.'”

She’s cagey about confessing too much, however, or being too specific about where her explorations have taken her, referring to her spiritual beliefs as “basic Quaker geologist mysticism.” When asked about her spiritual practices, she simply says, “Writing is my practice.”

She tells of the time she had coffee with Yale paleontologist Edward Lewis, the man who discovered Rama pithecus–which Andrews calls “the early, early man guy,” a manlike fossil once considered to be humankind’s earliest evolutionary ancestor–and having Lewis confess, “I think most geologists are closet pantheists. We see spirits in everything.”

“I find the world deeply inspiring,” she says. “I can’t believe that everything I observe, as a geologist, is not divine.”

Smiling, she adds, “But I leave it to you to guess what I mean by divine.”