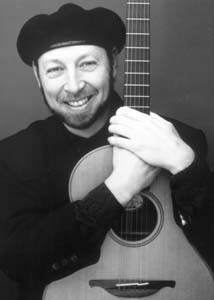 RICHARD THOMPSON has been known for many things three decades in music. He is regarded as one of the finest songwriters of the rock era, a writer of uncommon intelligence and wit. He is recognized as a distinctive guitarist who can be mentioned in the same breath with virtuosos such as Eric Clapton or Mark Knopfler. Thompson is also known for his humility–a valuable virtue for someone who has been one of the most praised artists of his generation.

So it was a bit startling to hear Thompson’s assessment of his newly released CD, Mock Tudor (Capitol)–even if there wasn’t even a hint of boastfulness in his voice. “I think this is a really consistent record,” Thompson says. “I think it’s as good as anything I’ve done, really. I think it’s as good as Shoot out the Lights or Rumour & Sigh in terms of being a consistently realized record. There are so many factors there–just subtle things like sequencing can make or break a record.

Those familiar with Thompson’s past will realize this is no small statement from the 50-year-old native of London. Shoot out the Lights, recorded in 1982 with his ex-wife, Linda, just prior to their divorce, was a riveting work that seemingly reflected the tension of their disintegrating marriage. It was included in Rolling Stone‘s top 100 albums of the past 30 years.

And 1991’s Rumour & Sigh is generally considered the finest of what has been a consistently strong string of nine solo albums that Thompson has made since parting ways with Linda. Time will tell if Mock Tudor becomes a Thompson classic, but it’s hard to imagine the album being considered as anything less than one of his better.

That career began in the late ’60s when Thompson became a founding member of Fairport Convention, the British band that helped pioneer the folk-rock form with a seamless blend of Celtic music, rock, and folk. In his five years with that band, Thompson was an integral force behind such seminal Celtic-rock records as Liege and Leaf and Unhalfbricking, both released in 1969.

After his 1972 solo debut Henry the Human Fly, Thompson married Linda Peters and began a rich musical partnership that produced six albums, including the aforementioned Shoot out the Lights and 1974’s I Want to See the Bright Lights Tonight, another work that Rolling Stone included among its Top 100 albums.

His solo career resumed with 1983’s Hand of Kindness. Thompson, known in concert for his fierce acoustic and electric guitar playing and urbane wit–has stayed on top of his game ever since, maintaining his place as one of the most consistently inventive and satisfying artists of the past two decades along the way.

THE MUSICAL STYLES that have always defined Thompson’s music find a home within Mock Tudor, as do more than a few references to Thompson’s own life in music. Lyrically, Mock Tudor is, at least in a loose sense, a theme album based around Thompson’s life and his feelings for his hometown of London.

“It’s stories set in London,” Thompson says. “Some of it’s about me, some of it isn’t about me. Some of it’s just stuff I picked up from watching other people. Basically, the theme is the setting, really. The location of the songs is the city of London and its suburbs.”

The London connection is obvious in such songs as “Sights and Sounds of London Town,” “Cooksferry Queen” (inspired by a club manager whose brush with the late-’60s psychedelic culture transformed him from a mafioso type into a peace-loving hippie) and “Walking the Long Miles Home” (which was inspired by the many evenings when Thompson would finish a gig, miss the last bus, and need to hoof his way home).

Other songs are more intimate. For instance, “Hard on Me” is a bitter and angry look at a relationship (“Hard on me, hard on me/ Why do you grind me small?”), while “Sibella” seems merely to be a tale of mismatched love. But as Thompson explains, both songs have more of a connection to his life and times than might be immediately apparent.

“You know, ‘Hard on Me’ is really about my father, rather than a love relationship, which is the way it’s kind of been perceived already,” Thompson says. “And ‘Sibella’ is a very naive love song. It’s a song about early romance, which is the idea. This is kind of my early experience, trying to get a grip literally and figuratively on the opposite sex.”

The dozen songs on Mock Tudor are separated into three sections, with the first five songs subtitled “Metroland,” the next four “Heroes in the Suburbs,” and the final three “Street Cries and Stage Whispers.” Each of these groupings is tied to a particular period of Thompson’s life.

Some will be tempted to view the three segments as relating to the three phases of Thompson’s career, with the first covering the Fairport Convention years, the second relating to the Richard and Linda Thompson period, and the last devoted to his ongoing solo career. Thompson says that would be a mistake.

“I mean, I think that’s probably a little pedantic,” he says. “It has more to do with a certain feeling, a development rather than a commercial overview.”