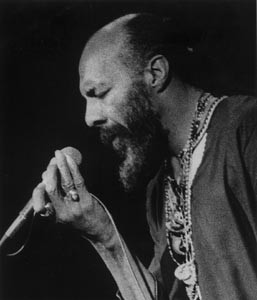 TRIBUTE ALBUMS usually preach to the converted; rare are sets of favorites for mass consumption (Common Thread, the country tribute to the Eagles, being a notable exception) or sets that unearth missing roots (the recent Bob Dylan­produced Jimmie Rodgers tribute). That’s OK–what counts is that a tribute album bring new perspectives to the faithful. One Step Up is clearly meant for hardcore Boss fans (among 28 songs, there are only two hits and two others known to the general rock audience), who hardly need to be convinced of his mammoth songwriting powers. But proving that power isn’t the point of this two-disc set. Instead, it’s about Springsteen as a titan of “meaningful” rock in an era that values soundscapes over stories.

To that end, disc 1 features new recordings that reveal Springsteen as a logical source for the current urban/folk/alterna-country scene. The disc focuses on his desolate-loner themes; highlights include John Wesley Harding finding tender hope in the ragged rocker “Jackson Cage,” and ex-Blaster Dave Alvin twisting the stadium boogie of “Seeds” into a Delta shuffle. Disc 2 features previously released covers of songs that Springsteen himself never released (with the exception of “Streets of Philadelphia”). This disc presents his early work as a sponge for ’60s rock and soul, from the British Invasion­style power-rock of the Knack’s “Don’t Look Back,” to the perfect Memphis gospel-soul of Clarence Clemons’ “Savin’ Up,” to rockabilly legend Sonny Burgess sweetly singing “Tiger Rose.”

But overall, the hits (Richie Havens’ sublime “Streets of Philadelphia,” for instance), the misses (Kurt Neumann losing the desperate terror of “Atlantic City” in slick hipness), and the fan-only trivia (Elliot Murphy using the more detailed, bootlegged version of “Stolen Car”) don’t really add up to a “tribute,” or even a portrait of this prolific singer/songwriter. The net effect instead reveals Springsteen as an unseen fulcrum in rock: For the past, he’s the Last Great Oldies Hero, the last important rocker to create in the language of rock’s golden age; for the future, he offers new writers ongoing proof that simple virtues like characters and drama can matter.
Karl Byrn

SOMETIME AROUND the fifth century–no one knows for sure–a Christian British princess who was promised to a pagan king decided to skip town for a pilgrimage to Rome, rallied 11,000 virgins for traveling companions, slighted a Hun chieftain, and was slain–along with her traveling virgins–near Cologne. Then she got sainted. In the 12th century, German abbess Hildegard von Bingen–an eccentric mystic and composer who is now the sweetheart of the early-classical music scene–penned a stunning series of ecstatic chants commemorating St. Ursula and the fallen virgins. The Anonymous 4, a New York­based vocal quartet who are the superstars of the aforementioned early-music scene, deliver the chants with emotional verve and bell-like clarity. If you got suckered into purchasing the recently released synthesizer-enhanced collection of von Bingen compositions from the producer of 1993’s fabulously successful, Grammy-nominated Chant (Angel/EMI), by the Benedictine Monks of Santo Domingo de Silos, then you owe it to yourself to savor this haunting, transformative work.
Greg Cahill

PIANIST JACKY TERRASSON tones down his excesses long enough to create a subdued palette for jazz vocalist Cassandra Wilson’s exalted talents. Sparsely accompanied by Terrasson, bassists Lonnie Plaxico and Kenny Davis, and Afro-Cuban percussionist Mino Cinelu, Wilson steals the show, rendering the likes of the country standard “Tennessee Waltz” and the Lerner-Loewe chestnut “If Ever I Would Leave You” in deep, hypnotic shades of blue. Further proof that Wilson–cut from the same soulful cloth as Nina Simone–is a major force with which to be reckoned.
G.C.