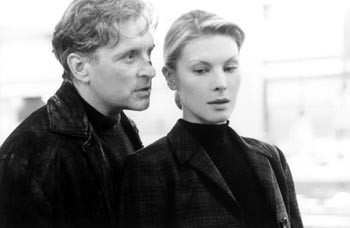 Playing ‘The Game’ with a stress expert

Writer David Templeton takes interesting people to interesting movies in his ongoing quest for the ultimate post-film conversation. This time out, he calls up Dr. Jim Loehr of LGE Sports Science to discuss the nifty new adrenaline-opera The Game.

I AM ON HOLD, sitting in the pre-dawn darkness of my office, listening to the plaintive howlings of Elton John over the phone as Dr. James E. Loehr untangles himself from another call.

Yawning, I reach for my coffee cup, nearly spilling it onto my lap, where Dr. Loehr’s confidently rebellious new book, Stress for Success (Times Business; $25), is open to page 39, the Toughness Training Profile. The Profile is a test–based on one given to entry-level clients at LGE Sports Science, in Orlando, Fla., a world-class mind-and-body training facility for athletes, businesspeople, and others in high-stress, maximum-performance situations–that helps the recipient determine his or her weaknesses by rating such things as self-discipline, positive attitude, and fearfulness on a scale of 1 to 10.

Having taken the test a few days back, I use this time to check my results for loopholes.

“Good morning,” Dr. Loehr’s cheerful voice cuts in, just as I am attempting to decide if my body language is more positive or negative. I sit up straight, throw my shoulders back, and greet the doctor in kind. “Interesting movie, wasn’t it?” heexclaims.

Thus begins our discussion of the audacious new thriller The Game. One of those don’t-spoil-the-ending movies (be careful, this column carries hints), it’s about an emotionally shut-down billionaire (Michael Douglas) whose senses threaten to come alive when his seedy brother (Sean Penn) gives him a birthday present he’ll never forget: a membership in The Game, purported to be a live-action role-playing adventure for rich folks, that turns out to be . . . something quite different.

As president and CEO of LGE Sports Science, and as one of the planet’s top sports psychologists–his clients include tennis great Monica Seles, hockey star Eric Lindros, and Olympic speed skater Dan Jansen–Dr. Loehr has a unique understanding of how the human mind and body react under the weight of enormous emotional pressure, such as that experienced by athletes, FBI agents, military personnel . . . and Douglas’ cranky tycoon.

“Here’s a guy who’s been very successful,” Loehr explains, “but his life is passing him by. I see it all the time. One of the things that happens to people under constant high stress is they can start losing touch with their emotions. They go kind of dead inside, they become numb. Like Douglas’ character. He felt no joy. He had virtually no compassion. He was pretty dead.

“Then this company comes along with The Game,” Loehr says. “What they are offering is a way to jolt people back to their senses again, to wake them up, to get them in touch with their lives again.”

All this talk of waking up is reminding me how early it is. After taking another swig of coffee (a stimulant Loehr recommends against), I suggest, “It sounds like you are in the same business as the people offering The Game.”

“We are,” he laughs. “We’re doing the same thing. We look at the effects of all the stress in your life, and we try to determine your weakest links. Then we set up a game plan that will jolt you back.

“What’s interesting in the movie,” Loehr continues, “and this is exactly what we’ve found, is that we can’t jolt you back by reducing your stress or by just creating a lot of comfort in your life. We have to create more stress for you.

“Stress is necessary,” he says. “It’s how we respond to stress that can be harmful. What we do is we get you on the edge, we push you to your limits. We stress you in ways that will bring you back alive. We need to open up new frontiers in your thinking, in your ability to dive deep emotionally. Because that’s where the real pearls are. That’s what they did to Michael in the movie. They pushed him to his edge.”

“It seems a little cruel,” I offer.

“Really? Think about it a minute,” Loehr counters. “When people go mountain climbing or skydiving, they’re deliberately taking themselves to the edge. That, they say, is where their lives open up for them. It’s kind of unfortunate that we have to push ourselves to the edge of annihilation in order to feel alive, but it works.

“The other thing that’s interesting is that if we don’t do it ourselves, life often does it for us. Life brings these thunderbolts from hell, as it were, to wake us up. It might be an accident or a heart attack or a plane crash. Something that jolts us to say, ‘I almost lost it, but now I have another chance.’

“Unfortunately, sometimes that never happens,” he adds. “You just shut down more and more, and then drift away.”

“Were someone to offer you a chance to play The Game,” I wonder, “are you so balanced that you wouldn’t need to accept?”

“I don’t know,” he finally says. “I’ve learned over the years that anytime I can do anything that opens me up, that allows the fog to clear and to show what’s really important, it deepens my capacity for living my life. I think I’d be more than game for it.”